Law enforcement: Six domestic violence-related murders in the Treasure Valley in the past year

After Sunday's double murder-suicide in Meridian, KTVB looked into how many murders were related to domestic violence over the last year in the Treasure Valley. 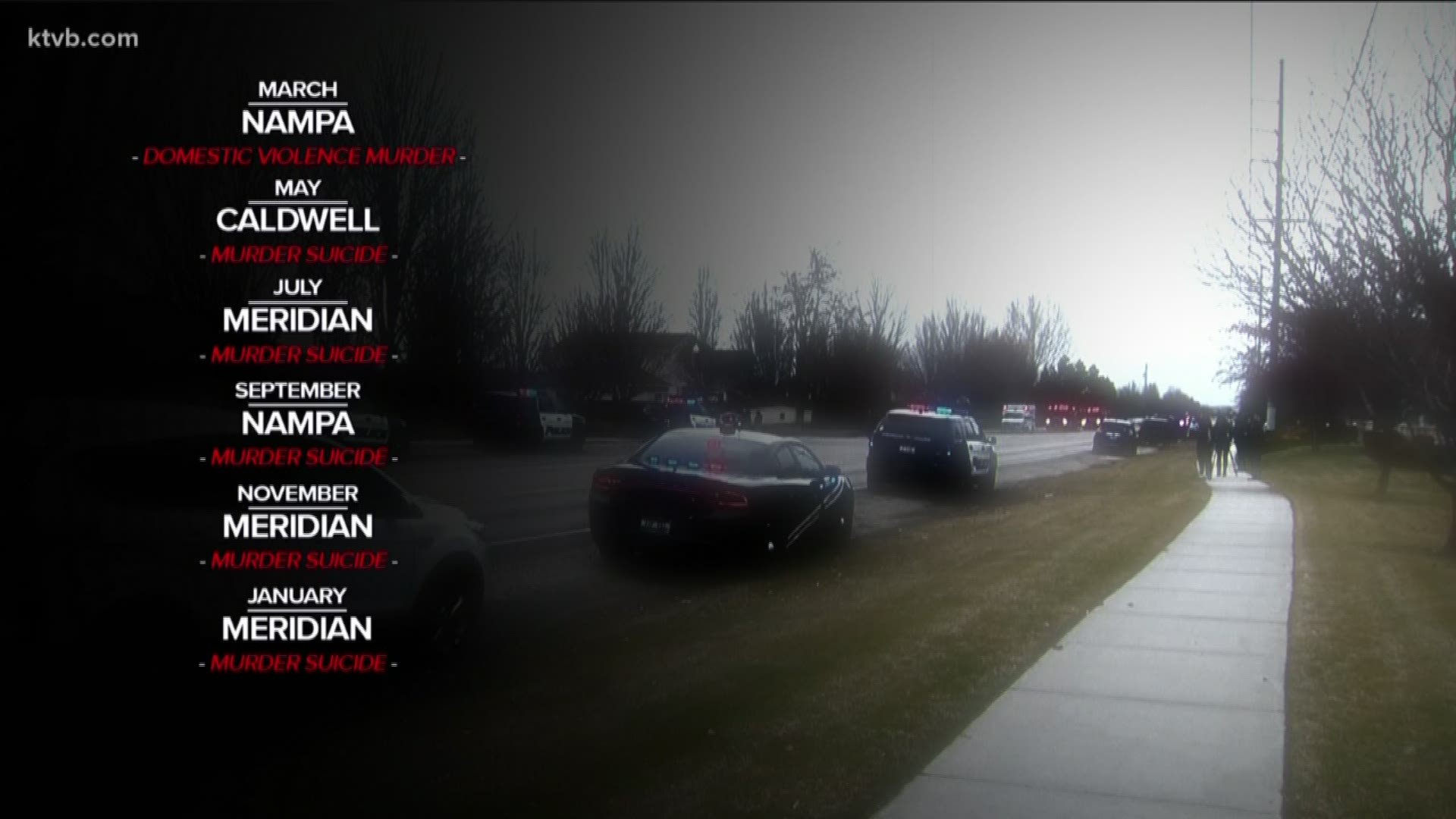 BOISE, Idaho — A statistic that may surprise you: nearly 1 in 4 women and 1 in 7 men have experienced severe physical violence by an intimate partner.

While rare, some cases can end in the worst possible scenario.

After Sunday's double murder-suicide in Meridian, KTVB looked into how many murders were related to domestic violence over the last year in the Treasure Valley.

When we hear about these horrific killings, the stories stick in our minds and our hearts. This past year, law enforcement says there have been six domestic violence-related murders in the valley; investigators say they found haunting backgrounds with most.

In a chaotic attack in Nampa in March, investigators say Evan Bashir stabbed and killed Kymberlee Larsen. The two were in a "deterioriating” domestic relationship, according to authorities. Nampa police shot and killed Bashir.

In Caldwell in May, authorities say Ian Stone shot and killed Jaclyn Zabel before turning the gun on himself. The killing was described as a "domestic violence event".

MORE: Murder-suicide victim's mother speaks out: 'She gave everything'

In July, a murder-suicide in Meridian: investigators say Daniel Cobb shot Crystal Wilson in the head, then turned the gun on himself. Both were discovered in the house's master bathroom.

Then in September, a married couple, Phillip and Kaylynn Butler, was found dead. According to Nampa Police, investigators believe that Phillip shot his wife, then killed himself.

Another murder-suicide in Meridian in November: Elizabeth Boone had moved out of the house she shared with Michael Boone. Two weeks later, she and a relative went back to pick up some of her belongings. According to a witness, Michael pulled Elizabeth into a room and the pair started arguing. Then, the witness heard several gunshots. Investigators say Michael shot Elizabeth in the head, then himself.

On January 6 of this year, police say Edward Epps barged into his ex-wife Heidi DeLeon's house and killed her and her husband Joe, before turning the gun on himself.

"When we hear over the radio 'domestic in progress' the hair sands up on the back of your neck. Your body changes, your mindset changes. Things don’t slow down, they become quicker. You’re thinking way outside the box,” Canyon County Sheriff Kieran Donahue said.

Domestic violence calls are dynamic and emotionally charged. Donahue says every day across the nation, up to 50 percent of calls for service are for domestic violence.

"A lot of times we can get there, get it calmed down. More often than not,” Donahue said.

Depending on the situation, officers may arrest the suspect and will tend to the victim, offering help and resources.

In that case, Meridian Police Detective Joe Miller says they can dig into why the event happened and how they can prevent it from happening again in the future.

"There's predicting factors: we call it the lethality matrix," he said. "We can predict that based on these factors this is most likely to happen. That’s where it becomes very important with our shelters, our women and children shelter, the family justice center. We really pinpoint that and our victim witness coordinators are an integral part of what we do."

But sometimes, officers are too late, and lives are taken.

It's typically not a random act.

"It’s the rarity that all the sudden it's the first fight between a couple and someone is dead,” Meridian Police Detective Joe Miller told KTVB.

“There's a history somewhere so we really delve into that history,” Donahue said. “We're building that case. This wasn't just a one time occurrence. Sometimes it is, but not very often. There's typically a pattern that leads to this.”

If both the victim and suspect are dead, authorities still investigate.

“Who was the last people to see these people alive, what – if any – motivation or any triggers, because honestly when there is a murder most of the time there is some history,” Miller said.

“Even though someone is not prosecuted, you still want to answer those questions for the family that is left behind,” Meridian Police Detective James Miller added.

When domestic violence escalates, law enforcement says they often have history with the couple. But not always; in some cases, something sparks and it turns violent.

Law enforcement can provide resources and education when responding to calls to prevent the worst possible outcome in the future. After a domestic violence incident, authorities may recommend the victim ask a judge for a civil protection order.

Victim witness coordinators are critical, as they work with victims to provide follow-up exams, help with counseling, reference to emergency services, as well as guide them through the judicial process.

"I think we can do what we can. Is that ever enough? It’s probably not enough,” Donahue said.

"Sometimes it’s so hard to do much on a case like this because it can be so sudden and volatile. You have a problem but some people never see stuff like this coming. It's hard to prevent,” James Miller said.

If you're a victim of abuse of assault, please call Faces of Hope Victim Center, Women and Children's Alliance, or Nampa Family Justice Center.