'We are not going to stand for that any longer': Idaho group wants intimidation of public officials to stop

The group, dubbed "The 97%," is supportive of reasonable public health measures to protect Idahoans during the pandemic. 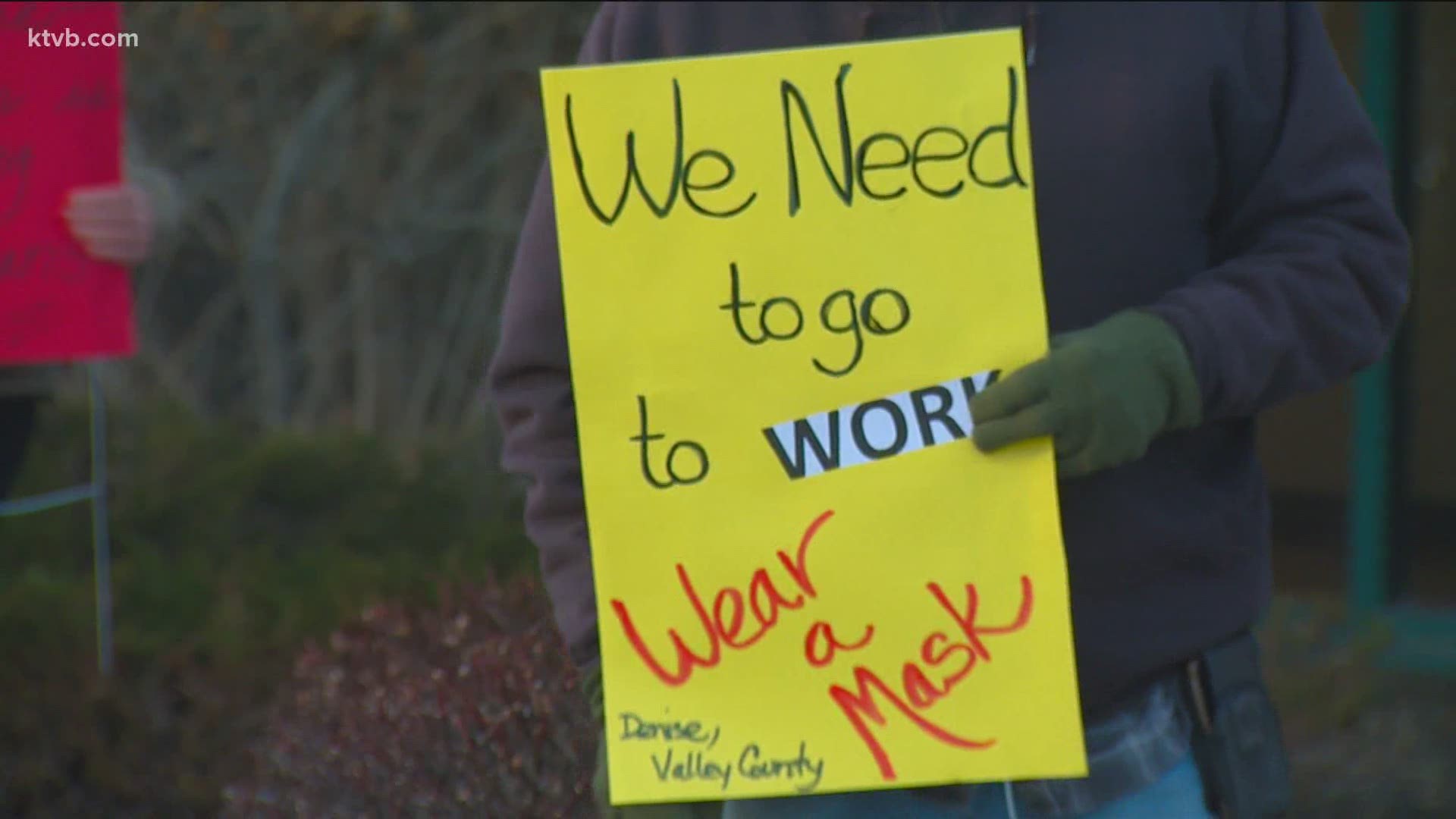 BOISE, Idaho — After multiple large-scale protests against Central District Health over a proposed public health order, a new group has formed in an effort to show that not everyone opposed the measures designed to protect public health.

The new group, dubbed "The 97%," held a news conference outside CDH's Boise office less than 24 hours after hundreds of anti-health order protesters gathered on the same spot.

The group tells KTVB that they are in support of Central District Health and the CDC guidelines that recommend social distancing, wearing masks, and washing hands. They also believe in reasonable public health measures to protect Idahoans during the pandemic.

Gwen Hernandez, a member of the group and a registered nurse in Boise, said this year hasn't been easy due to COVID-19.

“It’s been really sad, I've seen several of my patients die from this,” she said. “Because they catch it and they go into the hospital and they're just not strong enough to make it through.”

She and several other members of the 97% group showed up to CDH Wednesday afternoon to show the other side to the large protests on Friday and Tuesday nights.

“For us, this is a form of expressing our political views in a safe manner during a global pandemic,” group member Nathaniel Hoffman said. “So, we see it as equal to the protest that was held here last night.”

That protest and other protests at several CDH’s board members' homes prompted Boise Mayor Lauren McLean to call CDH Director Russ Duke and ask him to cancel the meeting.

“We are not going to stand for that any longer,” Hoffman said.

The 97% is the same group that posted hundreds of signs in front of the health district's office on Tuesday, to show support. The signs had messages from many residents in CDH’s jurisdiction that were supportive.

“Their voices matter, not just the loudest voices,” Hoffman said.

The group wants to see change moving forward. They started a petition on Wednesday morning that by the time the press conference had started, had received more than 1,200 signatures.

They're calling on the state government to do more. Since the stay-at-home order, the state has largely delegated the response to the pandemic to the local level.

“To show more leadership, put more rules in place and protect people who are dying," said Emily Walton, a member of the group. "Our hospitals are almost at capacity.”

Just like everyone else, the group wants to get back to normal life, pre-COVID. Two sophomores, Kat and Petra, from Boise High spoke at the meeting, urging everyone to make sacrifices in the interest of the greater good.

“I’m ready for adults and everyone in our community to step up,” Kat said.

Petra talked about how she has seen other communities in different parts of the world get back to normal life because they are taking precautions.

“I'm ready for Idaho to take the steps needed so we can go back to school and sports,” she said.

Hernandez, the nurse, just wants the group of protesters who were here Tuesday to know that COVID-19 is real and it's killing people.

“It just hurts my heart because their opinions don't change the reality that COVID is rampant in our community,” she said.

CDH tweeted on Wednesday that it's working on a plan for future board of health meetings.

Duke said on Tuesday they do have two meetings scheduled next week on Tuesday and Friday. At this time it’s not clear when the board will take up the revised public health order.