The Central District Health board was set to vote on a revised COVID-19 health order but stopped the meeting due to an 'intense level of protesters.' 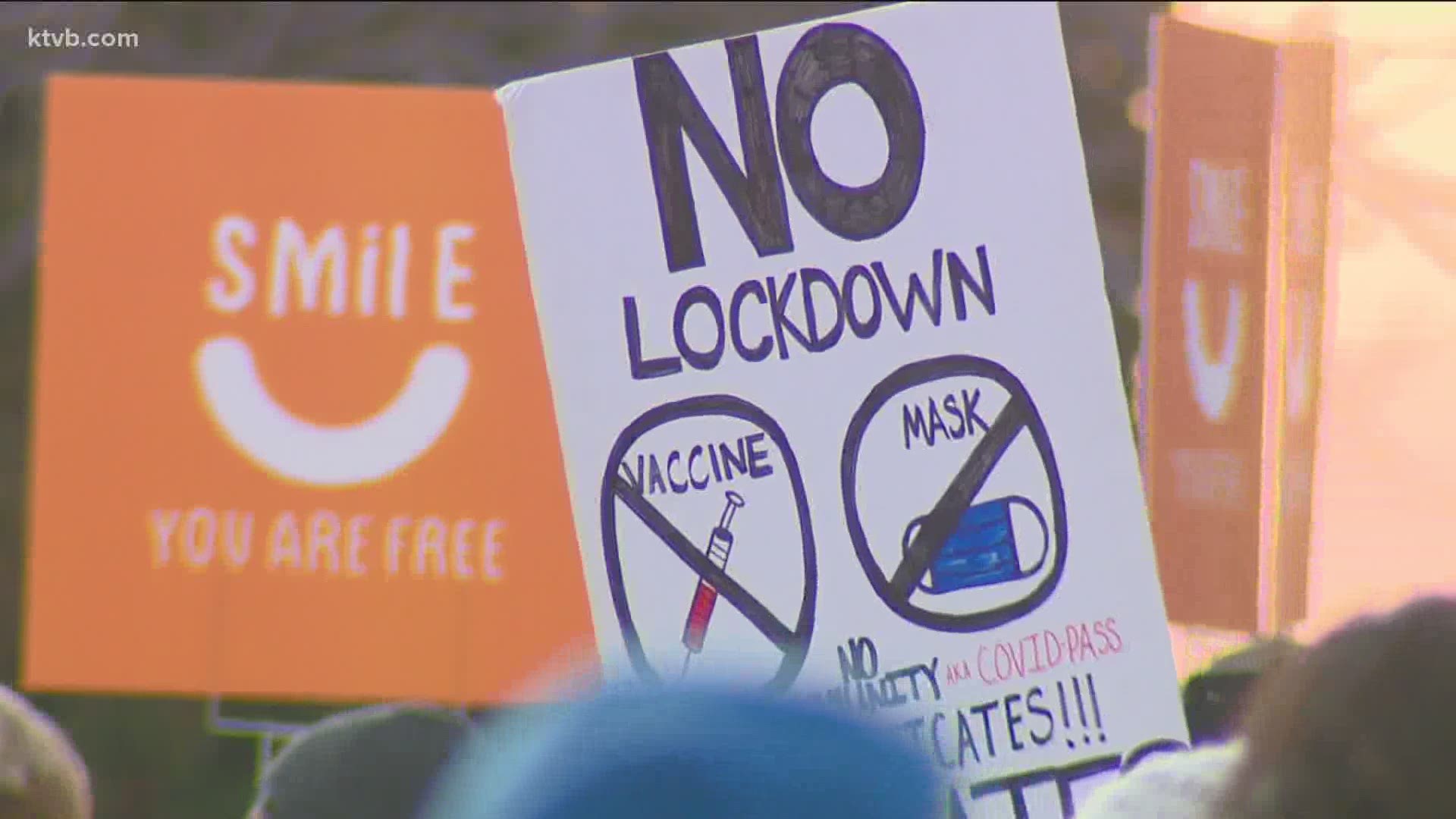 BOISE, Idaho — The Central District Health board meeting on Tuesday was halted after about 15 minutes due to protesters outside the CDH office and at several board members' homes.

The board had been scheduled to discuss and vote on a revised public health order at its meeting Tuesday evening.

Board members were listening to a presentation by Dr. David Peterman, the CEO of Primary Health Medical Group, when board member Diana Lachiondo said she had to leave because of protesters at her home.

"My 12-year-old son is home by himself right now and there are protesters banging outside the door," she said, fighting back tears. "I'm gonna go home and make sure he's okay."

Several minutes later, CDH director Russ Duke said that Mayor Lauren McLean had called and asked the board to end the meeting.

"I got a call from the mayor, and it sounds like the police, and she is requesting that we stop the meeting at this time because of the intense level of protesters in the parking lot and concern for police safety and staff safety as well as the protesters that are at some of our board members' homes right now," Duke said.

The board then voted to stop the meeting.

A KTVB photographer on the scene outside Central District Health said there were several hundred protesters - most of them not wearing face coverings -  gathered in front of the building during the meeting. The crowd began to disperse after the meeting ended.

Boise police said in a Twitter post that the department had requested the meeting be adjourned "in the interest of public safety." BPD added that officers are monitoring the crowd and responding to additional incidents in the city.

BPD requested the @CDHidaho meeting adjourn in the interest of public safety. Our first priority is to maintain safety and public order. Officers are currently monitoring the crowd and responding to reports of additional incidents in the city.

Police later said in a news release that they had tips that some members of the crowd intended to disrupt the meeting by forcing their way into the building.

One person was seen being led away in handcuffs. Police said the woman - later identified as 53-year-old Yvonne St. Cyr of Boise - had made her way inside the building and was arrested for misdemeanor trespassing after she refused to comply with officers' demands that they leave the building. Police noted that the woman was stopped inside the building by a CDH representative, who placed the person under citizens arrest.

"BPD took custody of the citizen’s arrest and took the subject to the Ada County Jail," the department said.

After receiving reports of protesters outside the homes of at least three board members, police responded.

"Investigators have identified some of the people involved and are securing warrants for their arrest on charges of disturbing the peace in the neighborhood," the department said in the news release.

McLean released a statement Tuesday night denouncing the protests and confirming that she requested the meeting be canceled because "the temperature has risen to a point that wasn't safe."

The statement reads, in part:

Our officers were asked to respond to people from outside our community whose purpose here was to disrupt local government in action, to intimidate their families. This is not ok. Let me be clear: we will hold offenders accountable. The rule of law is necessary for our democracy, and local government in action. A faction of people seek to disrupt and divide us, but Boiseans have shown time and time again that we’re willing to sacrifice for the health of others.

Our local health board is being asked to make decisions at the local level in lieu of statewide action. And when taking this job seriously – doing everything they can to help address the spread of COVID, they’re threatened and intimidated. No child should be frightened by a mob of protestors, no local official should fear violence for their public service.

1/7 Earlier today, in consultation with Boise Police Chief Lee and I asked Central District Health to adjourn their meeting in the interest of public safety. The temperature had risen to a point that wasn’t safe.

Credit: Logan Schenk / KTVB
Hundreds of protesters gathered outside the Central District Health office in Boise as the board was meeting to discuss a revised health order on Tues

Gov. Brad Little released a statement on Twitter Tuesday night urging calm and decrying the actions of those who protested at board members' homes.

"There is no place for this behavior in Idaho," he said in the post. "I urge calm among Idahoans so we can get through the pandemic together, stronger.

"The actions of protestors at the private residences of public officials is reprehensible," he added. "It is nothing more than a bullying tactic that seeks to silence. Our right to free speech should not be used to intimidate and scare others."

(1/2) The actions of protestors at the private residences of public officials is reprehensible. It is nothing more than a bullying tactic that seeks to silence. Our right to free speech should not be used to intimidate and scare others.

As of late Tuesday night, the meeting has not been rescheduled.

Before the meeting was halted, the board had planned to vote on a revised health order that would have put in place new restrictions - primarily focused on mask usage and limiting gathering sizes - on individuals and businesses.

The health district revised the original draft order after the board asked for several changes during a special meeting on Friday.

The order is meant to slow the spread of COVID-19 and preserve hospital capacity. Over the last month, CDH has seen alarming COVID-19 metrics in its region, which includes Ada, Boise, Elmore and Valley counties.

All four counties have high case rates for their respective population sizes.

At the meeting on Friday, healthcare leaders from St. Luke's and Saint Alphonsus said their health group systems are weeks away from crisis care standards, or rationing of medical care based on need.

Dr. Jim Souza, chief medical officer at St. Luke's, also pleaded with the public again to wear face masks and physically distance themselves from others in order to help healthcare workers from getting overwhelmed with COVID-19 patients.

"I'm not too proud to beg," Souza told the board. "It saddens me that this has become a debate of good versus bad, or right versus left and that's just wrong. I'm not going to lean on that. I'm going to do my job. We have banded together against a common enemy, and that enemy is this virus."

Unlike the original order, the revised order would allow youth and adult sporting events to continue, there would be more exemptions to the face mask mandate, visitations to long-term care facilities may continue under certain requirements, and bar top seating - at bars and restaurants - would be allowed so long as a barrier is in place between the customer and the bartender.

Watch the full live stream of the meeting here:

On Wednesday morning, Lachiando wrote at length on Facebook about her thoughts about the situation.

In part, she said,

"During last night’s Board of Health meeting, armed protestors once again assembled outside my home: yelling, banging, firing air horns, amplifying sound clips from Scarface, accusing me of tyranny and cowering inside.

I wasn’t actually inside the house: I was taking the call from my office at the Ada County Courthouse. But my two sons, ages 12 and 8, and my mother (who was out taking our dog on a short walk) were. And as many of you saw last night, my son called me in tears at the beginning of last night’s meeting.

I am sad. I am tired. I fear that, in my choosing to hold public office, my family has too-often paid the price. Though I was born and raised in Idaho and have chosen to raise my own family here, I increasingly don’t recognize this place. There is an ugliness and cruelty in our national rhetoric that is reaching a fevered pitch here at home, and that should worry us all."

She also called on Republican Idaho Gov. Brad Little on taking lead on a statewide plan to combat the COVID-19 pandemic, rather than leaving individual health districts to handle it.

"We cannot continue to patchwork together orders from health districts and cities: over 1,088 Idahoans have lost their lives to this virus and our hospital systems are on the brink. Rise to the moment and lead, Governor," she added.