After an incident on Highway 55, a family put out a Facebook post looking for witnesses and quickly went viral. 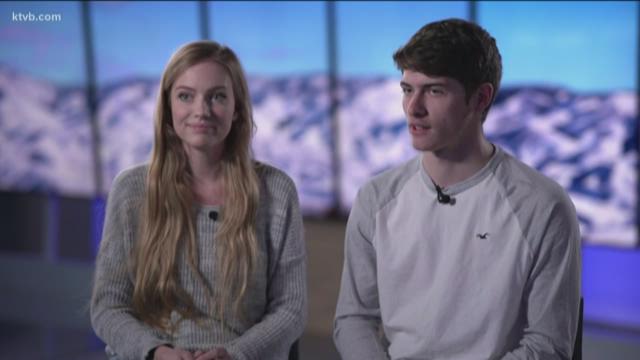 BOISE COUNTY, Idaho — How far is too far? That's a question that has been debated since a Facebook post about a road rage incident on Highway 55 blew up last week.

Brooke and Tate Jones say the family they encountered certainly went too far.

After an alleged run-in during a drive up to McCall, a post was published by a family member of the Joneses asking for help identifying the other family involved.

From there, the internet took over. In almost no time, that family was found online. Soon, people started posting the family's personal information as well as threats targeted at them.

At the same time though, how far is too far when it comes to making a point on the road?

"It felt just like they were trying to hit our car off the side onto the shoulder. Because every time we would swerve, they would swerve into us," Brooke said.

It was supposed to be a simple drive to McCall. During the drive up Highway 55, Brooke and Tate say they noticed a small black car tailgating them.

Quickly, the Jones' says the driver behind them got aggressive. Brooke felt uneasy, so she called her mom to talk through it. She recounted the call and explained the story to KTVB.

"Hey, we are just about to pass Avimor, a car has been tailgating us, I'm a little bit worried. So my mom heard the whole thing on the phone. She was pretty scared, just by hearing me," Brooke said.

The Joneses says that as they drove into Boise County, the situation boiled over.

"There is a turn off that goes into the rodeo area right there. They darted out on the side before they even cleared our car, they swerved in front of us, so I had to slam on my brakes and swerve over," Tate said.

Brooke and Tate said the family in the black car then pulled up and started yelling profanities at them. They say then a man got out of the driver seat and began coming toward them.

“He had gotten out of the car and started screaming more profanities and just started punching through the window," said Brooke Jones.

Both Brooke and Tate maintain that the man then reached through the window and hit Tate several times. Tate said he blacked out after the first punch connected with his jaw. Brooke says she thinks Tate was hit eight to ten times.

Brooke estimates that the punching and yelling continued for about two minutes before the man finally stopped.

"The man went and hopped back into the car, and they were all still yelling at us and we grabbed the video camera out," Brooke Jones said.

Tate took a video on his phone as the black car drove off. The couple says they wanted to identify the other family involved and see if anyone had witnessed the incident. So, they posted on social media.

Brooke explained that her mom listened through the phone as the incident happened and made the Facebook post. The idea was to identify the family involved and find witnesses.

The Facebook post, which has since been deleted, was quickly shared thousands of times. A short time later, people online had identified the family, even sending Tate and Brooke a photo.

“Our hearts started racing, he couldn't even look at it," Brooke Jones said.

Dozens of Facebook users claimed that the family seen in the black car had a YouTube Channel called Antler Trader, which published a video a few days after the incident that tells a very different story.

In part, the family said, "A lot of false information is being published and shared and spread which in turn is inciting death threats."

A little later in the video, they continued and said, "On our way to McCall someone decided to make some decisions which escalated to us being run off the road."

Brooke and Tate say it was tough to watch the video, which they say is not based on fact.

"Tell the world the wrong story, it's crazy to me," Brooke said.

The Antler Trader family tells a different side of the story and made it clear, this incident has been hard on them as well. As they detail in the video though, they are having a tough time for another reason.

"People that are reading the story, hitting share, you are all part of the problem. You are creating hate crimes against people you do not know against a subject you do not know about," the family said in the video.

KTVB asked the Joneses if they think things went too far online.

In the 20-minute YouTube video, The family accused by the Joneses said their daughter has received some of the worst from online comments.

"She couldn't go to school today because she has girls at her school whose names are being handed over to the police, posting her name, address, phone number, her school schedule," they said.

Brooke and Tate say that was never their intention. They were and are simply hoping that someone driving Highway 55, saw something that day. Something that will help investigators sort it out.

Meanwhile, the Jones family says they continue to deal with the fallout of the incident.

After filling police reports and talking with law enforcement, Tate went to the emergency room for treatment. Tate says he had a CT scan on his jaw which showed it was sprained. He also says he sustained a concussion from the punches.

The incident is being investigated by the Boise County Sheriff’s Office. While investigators continue to work through the case, Boise County Prosecutor Adam Strong sent KTVB a statement saying:

Why is Idaho's state fruit the huckleberry?

Where does the money generated by the Idaho Lottery end up?

Did Nancy Pelosi break the law by ripping President Trump's State of the Union address?

They 'sang in Mexican': Brian Holmes reacts to viewer's voicemail about the Super Bowl halftime show

'We certainly don't enjoy doing this': Idaho Fish & Game responds to the killing of a mountain lion in Hailey