The Broncos are once again defending The Blue this week when they host the New Mexico Lobos on Senior Night. 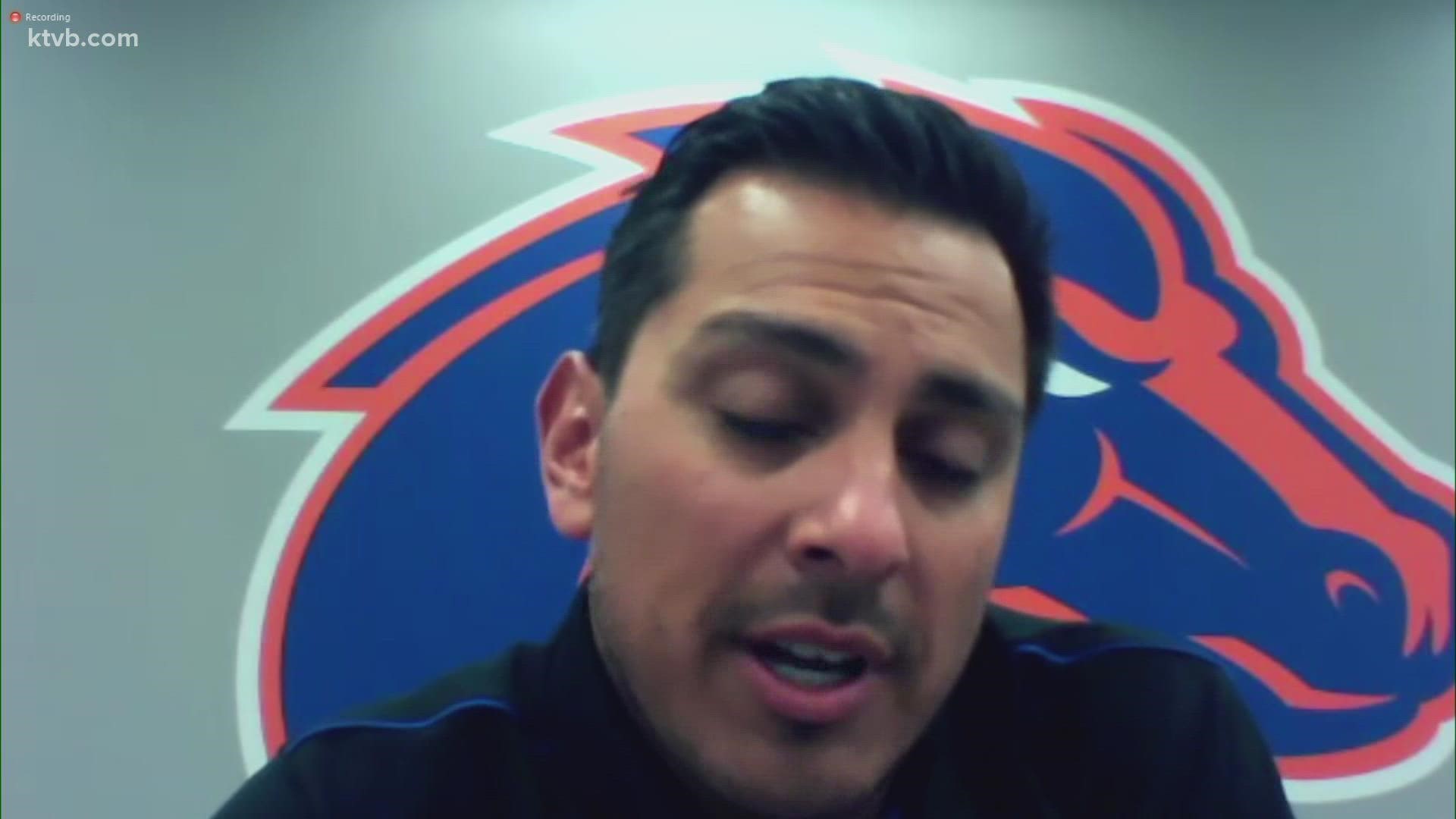 It took a little longer than Bronco Nation may be used to, but the Boise State football team seems to be finding its groove and identity in the last few weeks of the 2021 college football season.

On Friday night, the Broncos snapped a three-game losing streak, which was their longest since 1996, with a 23-13 win over the Wyoming Cowboys on The Blue. It wasn't necessarily the team's most complete or prettiest win of the season but with an unusual season like the Broncos have had this year, a win is a win, no matter how it happens.

Boise State's next game is against the New Mexico Lobos (3-7, 1-5 MWC) and is scheduled to kick off on The Blue at 7 p.m. MT on Saturday, Nov. 20. The game will be nationally televised on Fox Sports 1.

The weekly coaches' press conference was live-streamed in this article and on KTVB's YouTube Channel. Scroll down to find the stream. Following the press conference, individual interviews will be added to this story, check back for updates.

In Las Vegas, the betting lines have Boise State favored by 27 points over the Lobos, with the over/under for the total score at 48 points.

Boise State is currently on a three-game winning streak, which includes an impressive 40-14 win over then-No. 23 Fresno State on the road.

On Friday night, the Broncos' margin of victory over the Cowboys would have been much more than ten points if it weren't for a Wyoming 74-yard touchdown with 0:04 left in the game and if Boise State's offense didn't stall out and settle for field goals. While Bronco Nation would likely see more drives on offense finish in the endzone, fans should appreciate sophomore kicker Jonah Dalmas while he's with the team.

The Meridian native has been electric for the Broncos this season. Dalmas has made 22 of his 24 field goal attempts this year, which is about 92% accuracy, only missing a 50+ yard attempt and one chip-shot field goal in the redzone. He's also gone 33 for 33 on extra-point attempts on the year. As a freshman, the Rocky Mountain High School grad completed seven of his eight field-goal attempts, including two that were 50+ yards.

According to head coach Andy Avalos, the offense needs to find its rhythm with the run, pass and RPO as they make their way down the field so they can finish drives in touchdowns, rather than field goals.

"Making sure that during the course of the week that we're putting our guys in a rhythm where they had the utmost confidence in any of these zones or down or distance situation football right?" Avalos said. "That they have the utmost confidence and mentality to execute. What we need to execute in knowing the looks we're going to get now, especially down into the in the redzone."

While Lobos may be experiencing a less than stellar year with a 3-7 record, and with a Top 25 San Diego State team on deck next week, the Broncos are focused on defending The Blue.

"I know this week, we're gonna have a team that's going to come in here and give us their very best to accomplish their goal on The Blue," Avalos said during Monday's press conference. "They've got coaches that are extremely, extremely good at what they do and very well admired throughout this game, and so our focus is always on the task at hand."

Offensive coordinator Tim Plough said during Monday's press conference that the offense to start off drives better and not getting behind the sticks with long third down plays.

He added that the team struggled to establish the running game to start the season, but with a three-game winning streak, the Broncos' rushing attack is starting to take shape.

"It's like a boxing match," Plough said during Monday's press conference. "You know, it's if you come out throwing haymakers early, you might knock him out, but you also might wear yourself out and not be able to sustain the attack. If you can come out and have a consistent attack that lands body punches and you can add those up as the fight goes, and the fighters can wear out as the games are over. So I think that's the mentality that resembles our head coach and resembles the teams that have been here for a long time."

On the defensive side of the ball, co-defensive coordinator Spencer Danielson said he's most proud of the team, from the coaches to the players, taking ownership of their rough start of the season.

"As the players have kind of been able to take ownership of it and find ways that we can put it in better situations or play things better," Danielson said during the weekly press conference. "If it's a fundamental, that's a technique, is there ways we could teach it better? And seeing that show up on Saturdays or Fridays has been it's been awesome."

With two games remaining in the 2021 regular season, the Broncos have an outside chance at making it to a fifth-straight Mountain West Conference Championship game, but Boise State needs a few things to happen.

The Utah State Aggies are currently in the driver's seat in the Mountain Division with only one conference loss on the season, compared to the Broncos' two division losses against Nevada and Air Force. The Aggies host the Wyoming Cowboys this week then travel to Albuquerque to take on the Lobos to end the season.

If the Aggies lose one of their last two games and assuming Boise State can beat New Mexico and San Diego State next week, the Broncos and Aggies would be tied for first in the Mountain Division with a 6-2 conference record. In this scenario, Boise State would win the division and punch their ticket to the conference title game since the Broncos would have the head-to-head tiebreaker for first.

With two very winnable games ahead of Utah State, the Aggies are in a prime position to make it to the conference title game on Dec. 4, but the Broncos still have a realistic chance at a fifth-straight conference championship appearance.

To finish the regular season, the Broncos will play the San Diego State Aztecs on the road the day after Thanksgiving at 10 a.m. MT. The Aztecs are currently ranked No. 23 in the Associated Press Top 25 Poll. If the Broncos beat San Diego State, it would be the team's third win over a Top 25 team this season, the most in a single season in program history.