Boise State has been really good on the road. Now the Broncos have to be really good at home against a Wyoming team that has some momentum of its own. 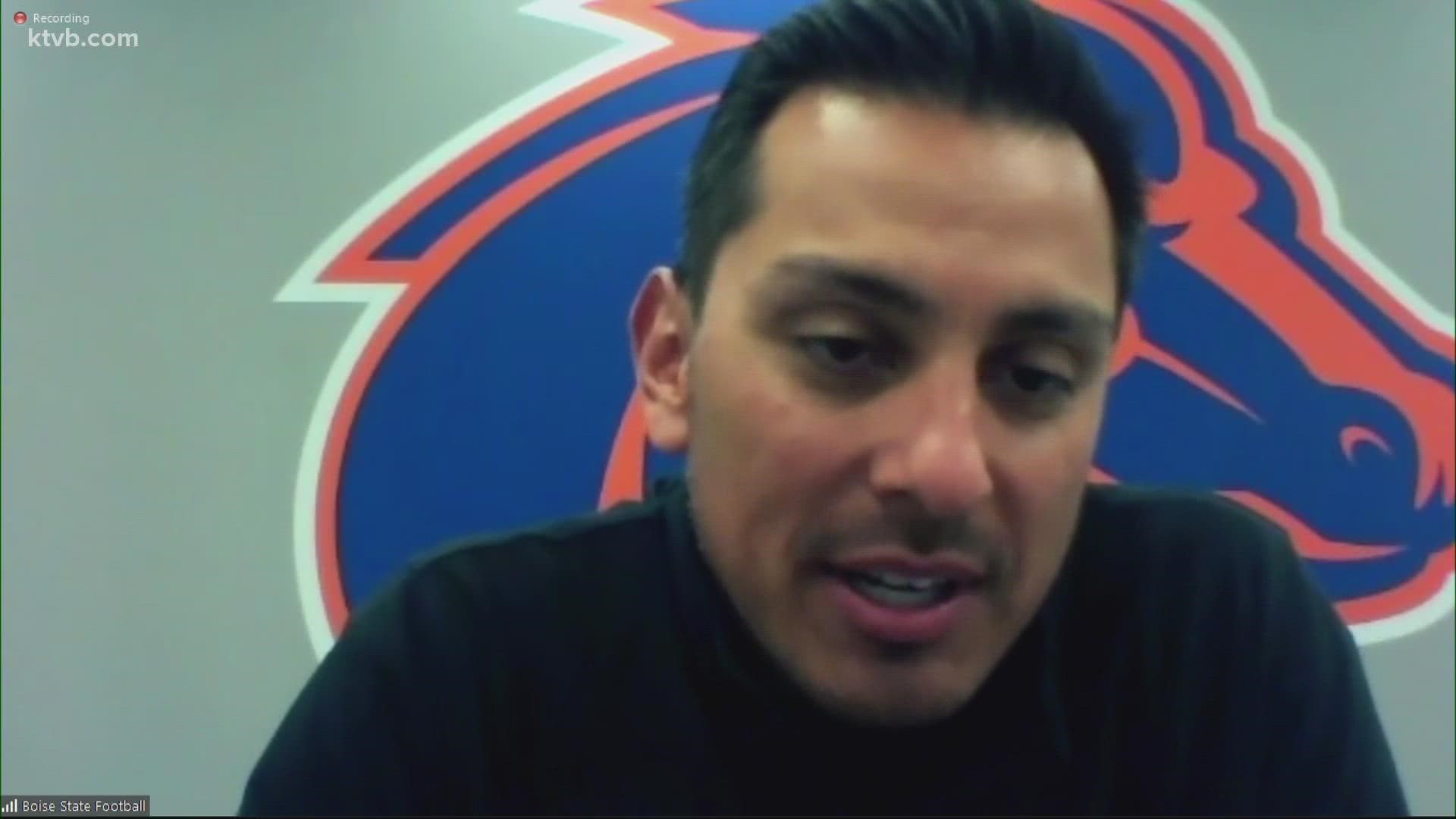 Boise State and Wyoming both got something off their chests last week. For the Broncos, it was finally notching their first two-game winning streak of the season with a satisfying 40-14 upset of Fresno State. For Wyoming, it was snapping a not-very-pretty four-game losing streak with a 31-17 stifling of Colorado State in the Border War. I’ve picked out two key numbers in favor of Wyoming and two in favor of Boise State tonight. The Cowboys allow only 158 yards per game through the air, by far the fewest in the Mountain West. And they average 4.6 yards per carry to the Broncos’ 2.8. Boise State has a big advantage in turnovers, where their margin for the season is plus-5 versus Wyo’s minus-8. And there’s the good ol’ red zone. The Broncos allow touchdowns on just 42 percent of opponents’ trips. The Pokes defense is at 67 percent.

THIRD WEEK AFTER THE BYE

The quote from Boise State coach Andy Avalos’ Monday press conference that has stuck this week: "That was a huge win on the road...but that was last week and it ain't going to happen again unless you bring it to life." The Broncos should know better than to rest on any laurels tonight after what has happened to them this season. And there’s that elephant in the room: the first three-game losing streak on the blue turf in 25 years. All three of those defeats happened prior to the bye week. We’ll find out if the lessons learned at that time are real.

These point spreads are wacky this year. Last week Boise State was a 5.5-point underdog at Fresno State, and look what happened. Tonight the Broncos are 14-point favorites against Wyoming. Lee Sterling of Paramount Sports didn’t buy it Thursday on Idaho SportsTalk, saying the Cowboys would cover and lose to the Broncos 31-24. Austin Mock of The Athletic doesn’t either. “Wyoming’s strength is their defense (top-25 unit according to my model) and that pairs nicely as Boise’s offense isn’t exactly a strength,” writes Mock. He says Broncos, 29-20. I think Bronco Nation will take that. A win by any margin is huge the next three weeks as Boise State tries to navigate a path to the Mountain West championship game.

Wyoming’s Xazavian Valladay is cemented as one of the Mountain West’s premier running backs. It wasn’t always that way. Valladay was underrated and lightly-recruited coming out of high school in Chicago. “I’d rather be underrated than overrated,” he said at Mountain West Media Days. “I’m always going to consider myself underrated. I’m a person that really works hard, and I will always remain humble. I like to open eyes and get people familiar with my style of play.” So let’s see how the All-Mountain West senior is opening eyes this season. Valladay is third in the Mountain West in rushing with 84 yards per game. He’s averaging 5.2 yards per carry and has scored five touchdowns on the ground. Valladay is not the only Cowboys runner Boise State has to stop tonight, but he’s the first one.

EVERYONE ELSE IN IDAHO ON THE ROAD

Idaho and Idaho State prepare for next week’s season-ending Battle of the Domes with two very different Big Sky road tests Saturday. The Vandals face Montana State in Bozeman, hoping their defense can hold up against the first-place Bobcats. Idaho yielded 338 yards to 1-9 Southern Utah last week. In San Luis Obispo, the Bengals have a shot at their first conference win of the season when they face another 1-8 team, Cal Poly. ISU has had a miserable year on offense, averaging just 297 yards per game. Defense? The Bengals are giving up 462 yards per game. And the question for College of Idaho: Is the game at Carroll College the last of the season for the Yotes? They need some help to get to the NAIA Playoffs. You know senior running back Nick Calzaretta will play it like it’s his last.

TOO EARLY FOR A TRAP GAME?

It’s no layup in Southern California Saturday night as Boise State men’s basketball visits UC Irvine for Game 2 of the season. It’ll be a test not so much of the Broncos’ talent, but their chemistry and mental toughness. The Anteaters were 18-9 last season—that’s just one less win than Boise State—and made it to the Big West championship game. A big game from the Broncos’ Emmanuel Akot would seem to be a key. Akot’s been on a steady climb since late last season, scoring in double-figures in five straight games (including the 11 points he put up in the opener Tuesday night). This might be a reach, but what would have happened during those frantic final seconds if Akot hadn’t been injured with half a minute left in Boise State’s 59-56 loss to Memphis in the NIT quarterfinals last March?

UC Irvine is led by Collin Welp, a 6-9 senior forward who topped the Anteaters with 13 points in their opener. UCI lost 62-51 at New Mexico State, the best team in the WAC. Welp is the son of Christian Welp, Washington’s all-time leading scorer. Longtime Boise State fans will remember a game against the Huskies when Christian Welp was a senior in 1987. It was in the second round of the NIT in Seattle, and it was a big deal at the time. Bobby Dye’s Broncos were saddled by an endless string of whistles in the second half and fell to UW 73-68 with a team that included BSU Athletic Hall of Famers Chris Childs and Arnell Jones.

The Idaho Steelheads have been right around even-steven during the first few weeks of the ECHL season. The Steelheads are slightly above .500 at 5-4 after opening their three-game series at Rapid City with a dominating 4-1 win Wednesday night. Adam Scheel has had the hot hand in net lately for the Steelheads, and the Dallas Stars organization took notice, as Thursday afternoon, Scheel was called up to Texas of the AHL. He made 33 saves in 34 attempts Wednesday against Rapid City in his second straight win. Scheel has stopped 64 of 66 shots in those victories.

The nation’s longest home winning streak ends at 35 games when TCU holds off Boise State in Bronco Stadium, 36-35. The Broncos and Horned Frogs, who had become rivals through three meetings in bowl games, fought to the final play, a missed 39-yard field goal by Boise State’s Dan Goodale. Frogs quarterback Casey Pachall stunned the Broncos with 473 yards passing day and threw for the winning two-point conversion with 1:05 remaining. It was the only conference game between the two schools, as TCU would depart the Mountain West for the Big 12 the following year. The loss also ended Boise State’s 65-game regular season home streak, and its 47-game home streak in league play.