The Broncos got an upset win over No. 23 Fresno State in the Battle for the Milk Can. 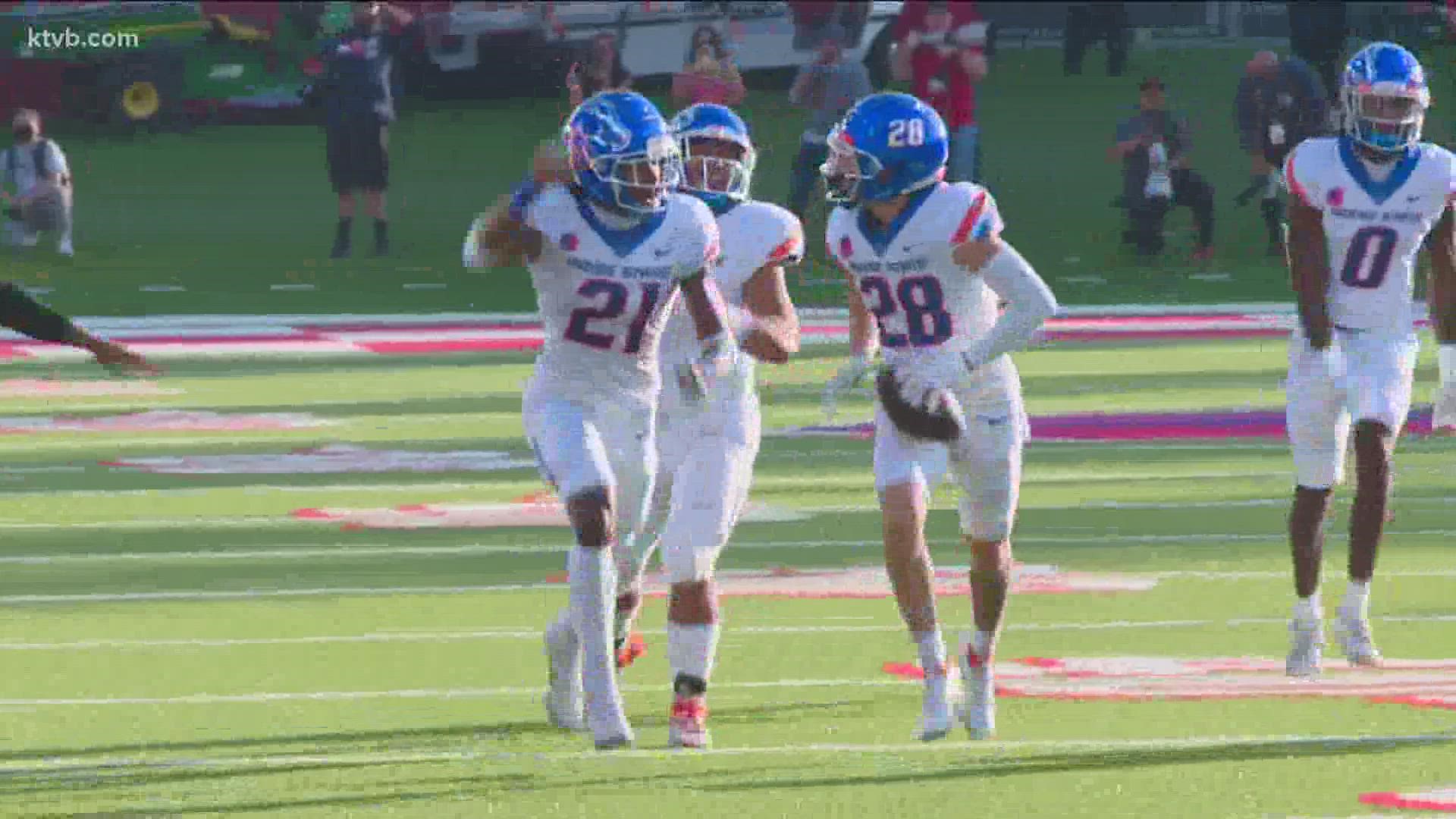 BOISE, Idaho — The Battle of the Milk Can had the makings for a Boise State upset over No. 23 Fresno State. After a sluggish start, the Broncos did not waste their opportunity for a second road win over a Top 25-ranked team this season.

The Broncos beat the Bulldogs 40-14 in front of a sold-out Bulldog Stadium Saturday night behind a bruising rushing attack, creative play calling and a punishing defense.

Following the game, Boise State's post-game press conference was live-streamed in this article and on KTVB's YouTube Channel.

The Broncos have their first winning record of the season after their upset win over the Bulldogs, with a 5-4, 3-2 record entering the final leg of the regular season.

According to Boise State head coach Andy Avalos, the Broncos had this upset win in them after the kind of week of practice and preparation that team had after their win over Colorado State last week.

Heading into week nine's rivalry matchup, many in Bronco Nation clamored for a more creative offensive attack and a running game that has become the standard for Boise State football and the Broncos had both against the Bulldogs.

After nursing an injury back to health the last few weeks, running back George Holani was the workhorse for the Broncos' offense on Saturday night. The junior had 21 carries for 117 yards.

"It was great," Holani said after the game. "All around offense and defensive, those really much improved compared to previous weeks. We both came out ready to ready to go and have that mentality. You know, we got to finish through all four quarters and just emphasizing that the most physical team wins and we're pretty physical out there today."

Holani also led the Broncos in receiving yards with 69 on two catches; however, it was wide receiver Khalil Shakir who once again shined and flashed why he'll likely be playing on Sundays in the NFL. Shakir ended the game with seven receptions for 67 yards, including a dominant touchdown grab that put the Broncos up 23-7.

The Broncos' defense kept the Bulldogs' offense from putting any drives together from the first whistle. Six of the Bulldogs' drives ended in punts and Fresno State quarterback Jake Haener threw three interceptions.

After the game, Avalos said the Broncos' defense had an unbelievable night against the Bulldogs' running attack on offense.

"It always starts with how you play in the line of scrimmage, number one with your mentality and then you got to be able to have some fundamentals and techniques to win one-on-ones," he explained.

Boise State junior quarterback Hank Bachmeier played a clean game, completing 15 of his 27 passes for 283 yards and a touchdown.

On defense, the Kaniho brothers, freshman Koanohi and sixth-year senior Kaniho, both snagged interceptions and safety JL Skinner also had a pick. According to Boise State officials, it's only the second time in college football history that two brothers both had interceptions in a game.

Boise State's win over Fresno State, who was ranked number 23 in the first College Football Playoff ranking, is the Broncos' second road win over a Top 25 team this season.

It's the first time that the Boise State football program has ever beat two Top 25 teams on the road in a single season.

After Saturday night's win, the Broncos have their first winning streak of the season with back-to-back wins, which they'll look to add to next week.

Over the last three weeks, Avalos said the players and the entire football program have focused on their commitment to the program, which Holani agreed with after the game.

Boise State is set to return to The Blue and snap their three-game losing streak at Albertsons Stadium when they take on the Wyoming Cowboys on Friday, Saturday, Nov. 12 at 7 p.m. MT.