Boise State football: Controlling what they can control

Now that the three-game losing streak on the blue turf is over, and the overall winning streak has been upped to three, BSU can focus on the “knowns” this week. 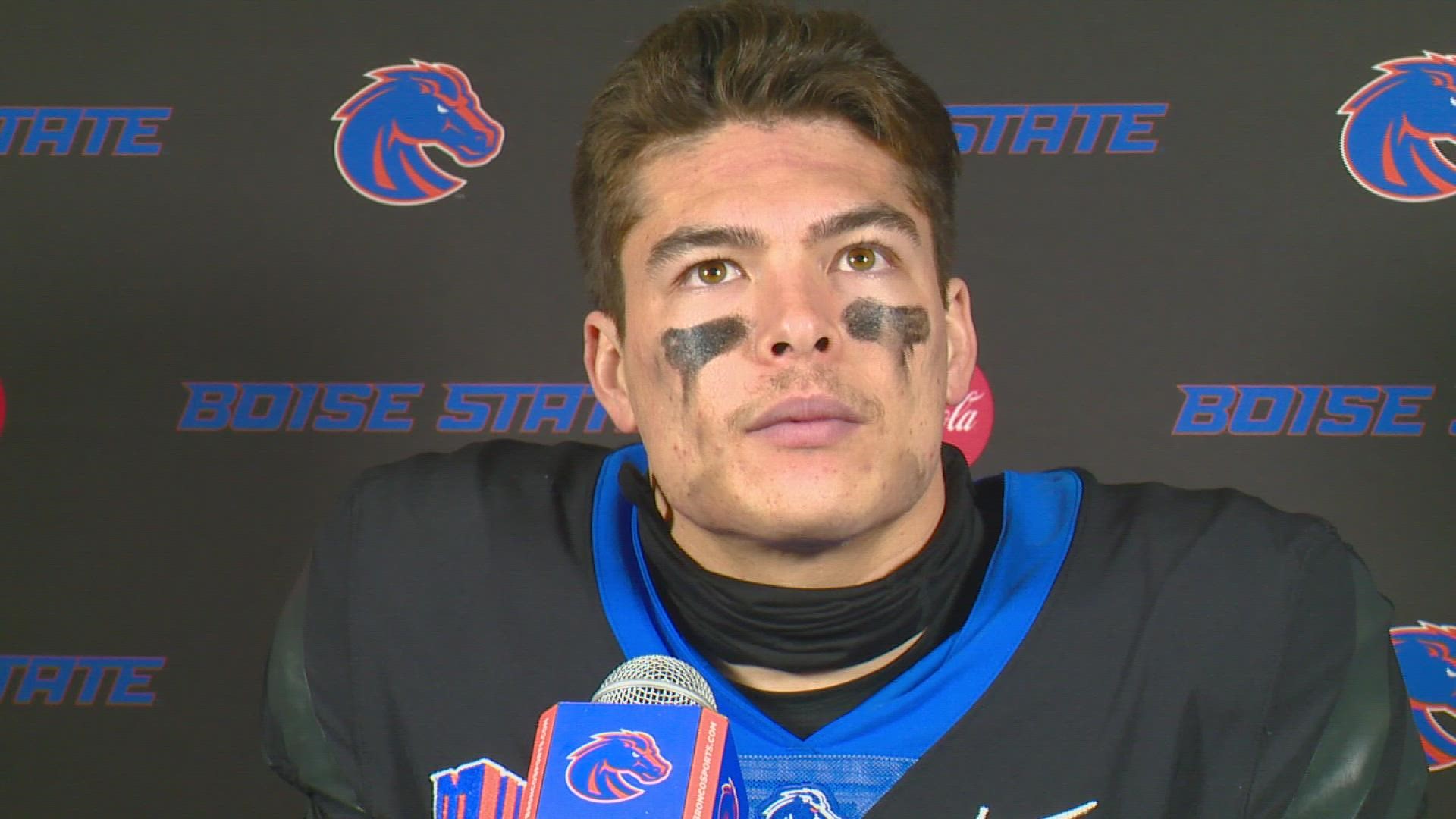 Utah State and Air Force may not have cooperated Saturday night, but that doesn’t take away from Boise State’s ability to finish strong after its 23-13 win over Wyoming Friday night. The team that was 3-4 a month ago, leaving fans to wonder if there was so much as a bowl game in the cards in December, is now bowl-eligible and is one victory away from a 24th consecutive winning season. The Broncos’ early-season struggles may cost them a Mountain Division title, as the Aggies just need to beat Wyoming at home and New Mexico on the road the next two weeks to secure the crown after beating San Jose State. But in terms of setting the table for the future, this Boise State squad has been doing that since the bye week by making progress in every phase and gaining confidence, recapturing some of that old Broncos mojo.

THE PASSING GAME MUDDLES THROUGH

Granted, the Boise State offense didn’t take a major step forward Friday night, but the Broncos worked around some major absences at wide receiver the best they could. Look at what they were missing. Boise State was without the injured Octavius Evans and Stefan Cobbs, with the two of them accouniting for 60 catches, 778 yards and seven touchdowns this season. And that doesn’t include the 10 catches and 85 yards CT Thomas took with him when he left the program almost four weeks ago. But the Broncos passing game survived, as Hank Bachmaier managed to throw for 225 yards while completing 72 percent of his throws and going interception-free. Billy Bowens and Davis Koetter stepped in to combine to make six catches for 53 yards, and Latrell Caples added another grab for 15 yards after Koetter exited with an injury.

The Boise State defense continues to put its early-difficulties in the past, yielding a season-low 288 yards to Wyoming. And it was even better than it looks. The Cowboys hit on a 74-yard touchdown pass on their final offensive snap of the night. On the Pokes’ first 46 plays, the Broncos allowed only 214 yards with a 2-for-9 mark on third-down conversions. That’s good in anybody’s book. Wyoming had racked up 385 yards rushing the previous week against Colorado State. The Pokes managed just 132 versus Boise State, with All-Mountain West running back Xazavian Valladay held to 37.

EVERY DRIVE TELLS A STORY

It may be Boise State’s most memorable drive of the season, even if it did cover only 62 yards and didn’t result in a touchdown. The Broncos got the ball on their own 12-yard line with 52 seconds left in the first half. Bachmeier connected with Khalil Shakir on three straight passes covering 44 yards. Three plays later, Boise State stopped the clock with three seconds remaining to let Jonah Dalmas set up for a 43-yard field goal. Wyoming called an obligatory time out to try to ice Dalmas. But then the Cowboys called a second time-out, and a third, amid a chorus of boos at Albertsons Stadium. Dalmas, as he is prone to do, calmly booted it through the uprights. He resisted the urge to taunt the Wyoming sideline, but he did appear to make a statement of some sort in that direction. Bring on the lip-readers.

You often hear coaches and players say there are no moral victories. Idaho’s defense could certainly claim one if it wanted to after the way it played Saturday against Montana State, the No. 3 team in the FCS. The Vandals were knotted 13-13 with the Bobcats deep into the fourth quarter before MSU prevailed 20-13. Idaho quarterback Mike Beaudry was out, and Zach Borisch, more of a runner than a thrower, filled in. Despite rushing for 70 yards, Borisch was sacked five times, and the Vandals were held to 277 total yards. But Idaho kept the MSU offense mostly in check until a Tommy Mellott touchdown run with just over two minutes left in the game provided the game-winning points.

YOTES LEFT OUT BY NAIA

It ended up being the difference between an outright Frontier Conference championship and a berth in the NAIA Playoffs—and the outright end of the season. College of Idaho turned the ball over five times in a 21-6 loss at Carroll College Saturday in Helena and was not selected Sunday for the NAIA postseason. The Coyotes ended up in a three-way tie for the league title, as Rocky Mountain lost to Montana Western Saturday. Western was the highest-ranked Frontier team in the final NAIA Coaches Poll and got the league’s automatic berth. There were no at-large berths doled out to the Frontier. The Yotes’ season thus ends at 7-3, their fifth straight winning season. C of I’s defense was the story this season, allowing the fewest total yards since football was revived in 2014.

In their Opening Night win over Utah Valley, Boise State shot the ball well—except from three-point range. Saturday night at UC Irvine, the Broncos didn’t shoot it well from anywhere while absorbing a 58-50 loss to the Anteaters. They hit just 32 percent from the field and went 3-for-22 from three-point range, and they got only two points from their bench. Marcus Shaver Jr. started after missing the UVU game with a hand injury and led Boise State with 14 points, but he missed all three of his three-pointers. Mladen Armus pulled down 10 rebounds, but he was just 2-for-6 from the floor. The Broncos hope like heck that’s a one-off with the Charleston Classic starting them down this week.

The Idaho Steelheads didn’t ask much of goalie Jake Kupsky in his first start of the season Saturday night. After all, they suffocated Rapid City in the Steelheads zone, allowing only 14 shots on goal the entire game. But Kupsky stopped every one of them to key a 3-0 Steelies victory. It was Idaho’s first shutout of the season, and it was the fewest saves in a shutout by a goaltender in the Steelheads’ ECHL era. Colton Kehler scored a minute and a half into the game, and the Steelies didn’t look back. They took two of the three games in the series at Rapid City and come home with a 6-5 record.

In his 37th season overall and 32nd season at Duke, Mike Krzyzewski becomes the winningest coach in Division I basketball history, notching his 903rd victory in a 74-69 win over Michigan State in New York’s Madison Square Garden. Krzyzewski passed Bobby Knight, for whom he played as an undergrad at Army in the late 1960s. Knight was across the floor at the ESPN broadcast table, and Krzyzewski made a beeline for his mentor at the final buzzer. Krzyzewski, now in his final season, currently has 1,173 career wins.