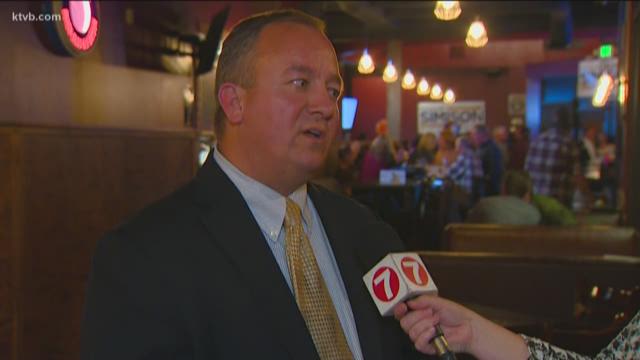 MERIDIAN, Idaho — For the first time in 16 years, Meridian has a new mayor.

Simison has served as chief of staff to current Mayor Tammy de Weerd for the last 12 years.

He told KTVB Tuesday night that he learned a lot for de Weerd, specifically, how to develop and manage a city budget.

“I think Meridian has been blessed to have a great mayor for the last 16 years," he said. "I think I’ve learned from a very great person to lead the city.”

Simison plans to continue some projects the city is already working on, including the comprehensive plan. Moving forward, he said, addressing traffic and transportation will be two top priorities.

“I think we need to be looking at how we can invest in these resources - in our roads, sidewalks, pathways to make connections that people are asking for," he said. "How do we get from point A to point B easier in our community?”

Simison thanked his supporters, saying his win was a community effort.

"I’m really honored they could get behind me” he added.

Credit: Logan Schenk/KTVB
Robert Simison officially launched his campaign for mayor of Meridian at an event on Wednesday, May 25, 2019. Simison is the chief of staff for current Mayor Tammy de Weerd.

With 53% of the vote, Elizabeth Strader won Seat 1, beating out three other candidates. And Jessica Perreault got 47% of the vote to claim Seat 5.

Meanwhile, Seat 3 was still undecided as of early Wednesday morning. In that race, write-in candidate Kristen Pudlow had missed the deadline to appear on the ballot by just a few days, a city spokesperson said. Because she is a write-in, all votes have to be counted by hand and results were not available. Her opponent in the race is Brad Hoaglun.