Bieter, McLean to face off in Boise mayoral runoff election

Neither candidate surpassed the 50% vote threshold to win Tuesday's election. 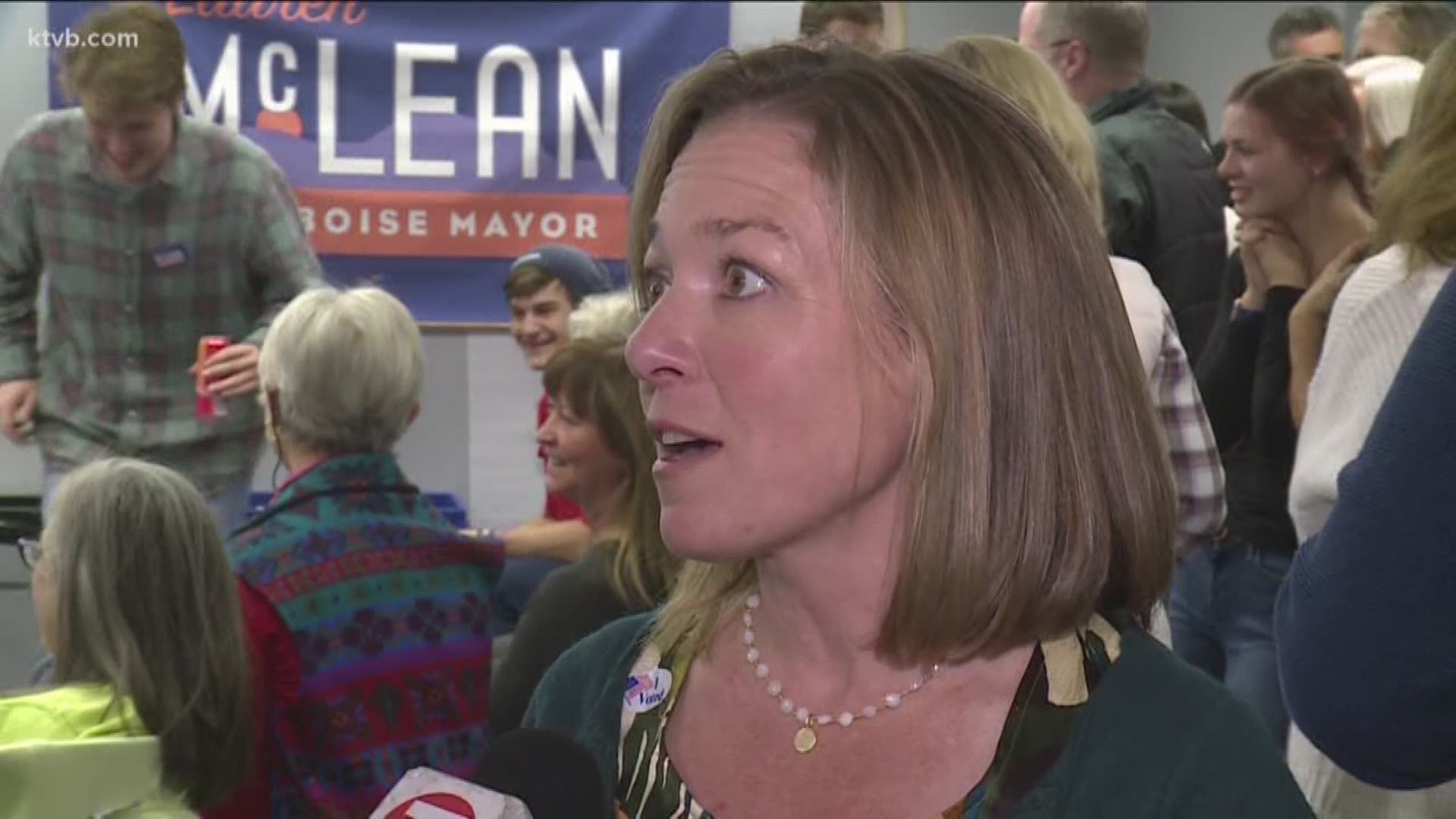 BOISE, Idaho — The Boise mayor's race isn't over just yet.

With 100% of precincts reporting late Tuesday night, none of the seven candidates for the post had surpassed the 50% vote threshold required to claim victory.

Current City Council President Lauren McLean came the closest with 46% of the vote. Incumbent Mayor Dave Bieter was in second place with 30%. That means the two will meet in a runoff election on Tuesday, Dec. 3.

Of the other five candidates, ACHD Commissioner Rebecca Arnold came in third with 13% of the vote. Former Boise mayor Brent Coles got 7%.

McLean said her campaign is now looking forward to the runoff election.

"We are ready to keep moving," she said. "We have 27 more days until the next election."

She added that she believes voters responded Tuesday to her message about bringing a fresh perspective to City Hall.

"The mayor sets the tone and the agenda, so I really look forward to leaning in and working to build consensus on transportation issues - we're 20 years behind on transportation systems in this Valley. And there are really urgent needs around affordable housing," she said. "So both of those issues I really look forward to working on, and of course, leading on a transition to clean energy, and using that to our advantage in building our economy."

Bieter released a statement about the results Wednesday afternoon, saying he was also looking forward to the final part of the mayoral race.

"The results from last night's election made one thing clear - the people of Boise need more time and a robust dialogue to determine who their next mayor is. It's not a surprising result in a field of seven candidates - in fact, I welcome the opportunity to distinguish myself even more with my main competitor, Council Member McLean," he said.

"Over the next 4 weeks, we will work even harder to bring this election to more Boiseans so they can determine who they trust with the future of our city," Bieter's statement continued. "On December 3rd, people will cast their ballots again and I have faith, together, we will make Boise the most livable city in the country."

Editor's note: A previous version of this story said the runoff will be the first-ever in the city's history, a claim backed up by city and county officials. However, we have since learned that there have been several previous runoff elections for Boise mayor.

While the mayor's race is still undecided, the races for three City Council seats are not.

Attorney Patrick Bageant beat out five other candidates, picking up 29% of the vote to win Seat 1. There is no runoff election for City Council races.

For Seat 3, Boise Bicycle Project executive director and co-founder Jimmy Hallyburton won with 52% of the vote in a close-fought race against Meredith Stead.

And incumbent City Council Member Elaine Clegg easily won re-election for Seat 5 with 50% of the vote. Her opponents - Brady Fuller and Debbie Lombard-Bloom - each got around 25% of the vote.