In addition to the birthday cards from the community, Odie Jones' extended family put together a 5K race to raise money for his mounting medical expenses. 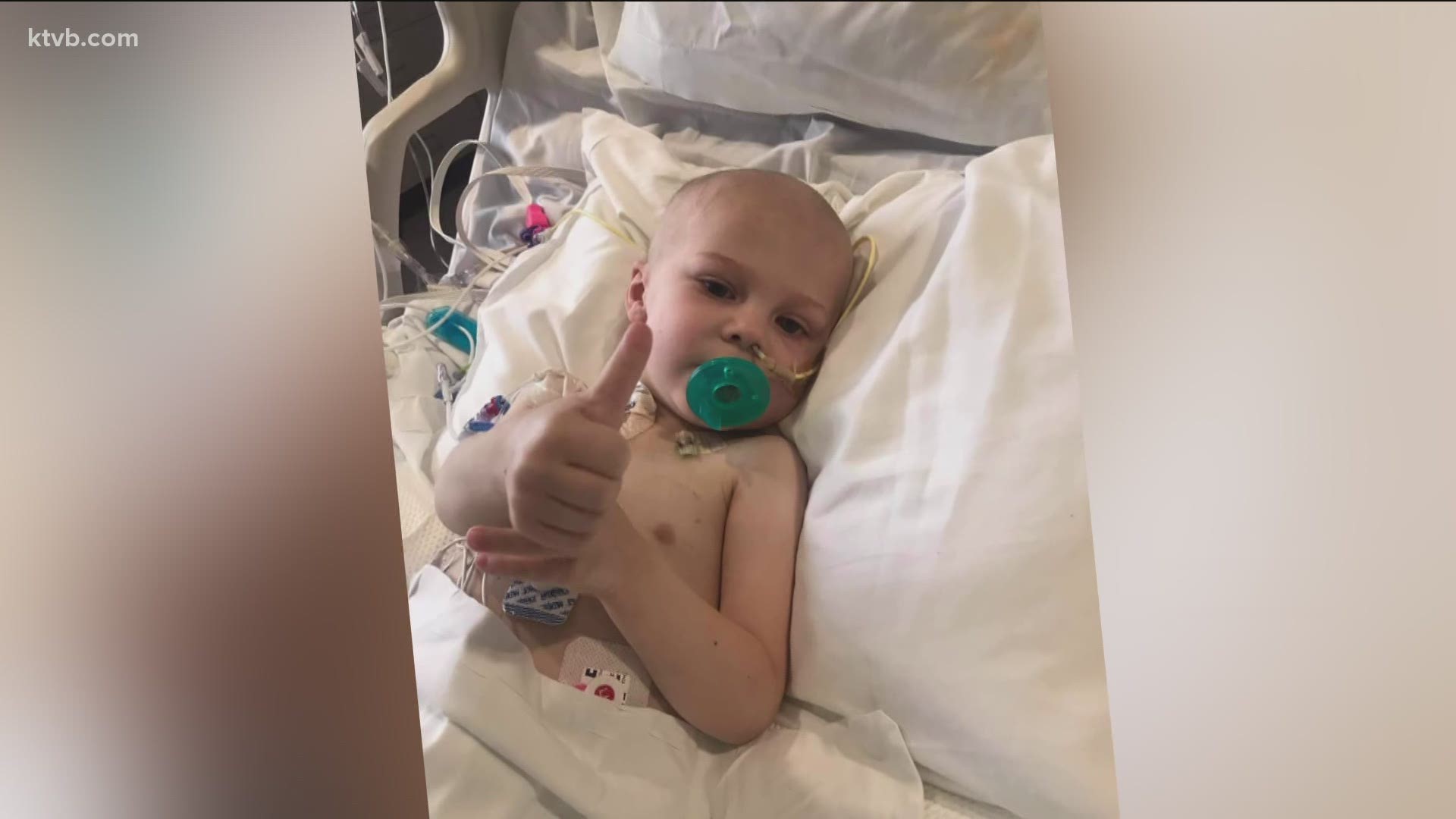 BOISE, Idaho — In honor of his third birthday, a Boise boy's mother asked the Treasure Valley community to send him cards. Odin Jones is battling cancer, and he's had a tough few months. The response was incredible!

To help the Jones family through this difficult time, their extended family also put together a virtual 5K race to raise money for their mounting medical expenses. It's this Saturday, April 17th and the whole community is invited to be a part of it.

When Odin 'Odie' Jones was two years old, he was diagnosed with Stage 3 cancer. He is fighting a rare kidney cancer called nephroblastoma, also known as Wilms' Tumor. It is the most common cancer of the kidneys in children under the age of five, according to MayoClinic. The only symptom, according to Odie's mom, was a fever that lasted a week. Fortunately, his doctors knew what to look for.

“Odie landed himself in the ER," Odie's mom Brittany Jones said in a November 2020 Facebook post. "After imaging, scans and lab work he was diagnosed with a Stage 3 Wilms’ tumor growing from his kidney."

Odie began his battle with cancer very quickly, undergoing major surgery to remove a tumor, one of his kidneys, and some of his lymph nodes.

“After an 11-hour surgery from amazing surgeons who I will never be able to thank enough, they removed a 15 cm tumor, his left kidney, surrounding lymph nodes and kept it 1cm from entering into his heart,” Brittany Jones wrote on the day of Odie’s surgery.

Just as Odie began receiving treatment for cancer, he was hit with COVID-19. Although the infection was tough on him, he battled his way through it.

Odie has been at St. Luke’s Children’s Hospital for most of the last several months. His mom and dad take turns staying with him, while one of them stays home with Odie’s older brother and sister, Atticus and Isla. Odie does have a chance to come home occasionally, and when he does, his family cherishes the time they get to spend together.

At the end of March, Odie celebrated his third birthday and was well enough to be home for a big celebration. In honor of his birthday and everything he has been through the last several months, Odie's mother put a call out on Facebook, asking for birthday cards for him.

“Thank you all so much for helping give Odie the most amazing birthday ever,” Brittany Jones said in a Facebook post. “He loved everything! We will never be able to thank you enough for the cards, letters, stickers and packages we received. The love for this little guy and our family surprises me every day, and I will be forever grateful for all of your love during this fight.”

While in the hospital, Odie has been spotted wearing his dinosaur costume. He is a huge fan of dinosaurs! So much so, his siblings started calling him "Odinosaurus."

Odie's extended family decided to use his love of dinosaurs for something special, and put together the Odinosaurus 5k. The virtual run/walk was created to raise money for the Jones' mounting medical expenses as they face hospital bills, medication costs and the loss of a second income.

Tonight at 10, meet 3yo Odin Jones of Boise. He’s battling cancer, fighting so hard, spending most of his time in the hospital. There’s a special way you can help this little guy & his family handle their growing medical expenses. A virtual 5k! I’ll tell you all about it! @KTVB pic.twitter.com/yYP7bGT62F

The 5k is set to take place virtually on Saturday, April 17, and the whole community is invited. You can register for the race here.

If you and your family participate in the race, post a photo of you running or walking with the hashtag #thumbsupforodie.

For more ways to help the Jones family, click here.