Anthony Dandrea has been the team manager for four years, and he has Down syndrome. He took to the court in a recent game and inspired everyone in the gym. 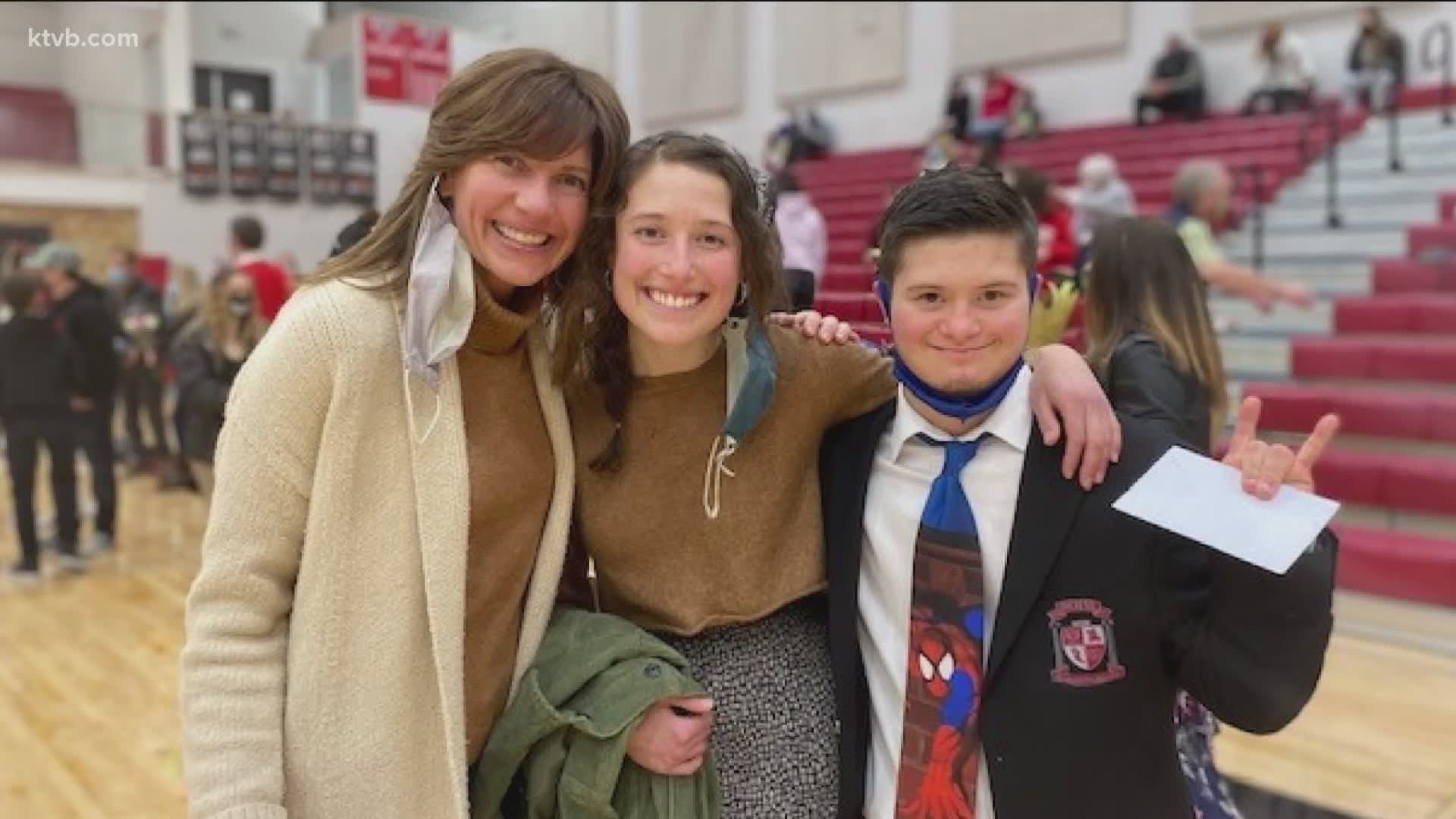 BOISE, Idaho — Anthony Dandrea is a senior at Boise High School. He has Down syndrome and loves school, his friends, and playing sports, mainly basketball.

“It makes me happy,” Anthony said.

He started playing basketball when he was a little boy and played all through elementary and middle school on both school and local teams.

“It all started when he was four or five years old when we started dribbling the ball and shooting at the hoop in the driveway,” Anthony’s dad, Trace Dandrea said. “Then in high school we had him go out for the team, and it was pretty competitive. He didn't make it.”

Anthony was disappointed, but the coaches at Boise High School knew they wanted him on board. They asked him to be the team manager, and of course, he said yes.

“He's been our manager for the past four years,” Boise High School Head Basketball Coach Manny Varela said. “Every game he comes out with his shirt and tie and jacket on. He really is a special motivator for us.”

Anthony has known some of the kids on the team since kindergarten.

“I've known Anthony since I was five, and ever since I've known Anthony he's always been a huge inspiration to me,” Boise High player Jake Alan said. “Anthony always just brings joy to everything he's around.”

Anthony's mom and dad, Trace and Jennifer Dandrea, have been his biggest advocates since day one.

“I think from the time he was born, we've thought that Anthony was just miraculous,” said Jennifer Dandrea, Anthony’s mom. “He's done things that surprised us from the time that he was infant, to right now.”

The Dandreas dreamed of more inclusion for all kids with special needs. A couple of years ago, they created the nonprofit IncludeAbility.

“So my dad came up with that name, it means kids helping kids,” Anthony said.

IncludeAbility is an organization that promotes including kids (K-12) with physical or intellectual challenges in all mainstream youth sports and other activities. The goal is to focus on what’s possible for these young athletes, not on their limitations.

“This is a great foundation because we can help other families with kids with disabilities to think the same way we did,” Trace Dandrea said. “We want to take that fear away, and for them to say you know what? My son, he can do a 5k, he can do a triathlon, why shouldn't he be on the track team?”

Anthony has always dreamed of playing in a basketball game with the guys at Boise High. His coaches wanted to see that happen, too.

After four years of managing the team, he got that special opportunity at a recent game against Capital High School. Varela talked it over with Capital High’s coach, and they both agreed that their game would be the perfect time to make it happen. The players and coaching staff from both teams were really excited for the big night.

“I knew I wanted to see Anthony on the court,” Boise High Assistant Basketball Coach Paul Perotta said. “To see him put that jersey on, it still gives me goosebumps.”

#7sHero Meet Anthony Dandrea. He’s a Boise High senior, a great friend, the manager of the basketball team, & he just happens to have Down syndrome. After managing the team for 4 seasons, his dream to suit up and play with the guys finally came true! Watch @KTVB at 10. #GoodNews pic.twitter.com/XDAmL8euCS

No one was more excited than Anthony. It all began with the game announcer introducing Anthony to the crowd.

“They called my name out and my height and my name,” Anthony said with a big smile. “Then, I started shooting."

After a couple of attempted shots, Anthony made a three-pointer. The gym erupted with cheers and the players from both teams circled around him at half-court.

“Yes I made the shot and all the players go around me,” Anthony told KTVB. “I played in the game.”

His fellow players and coaches were filled with emotion seeing Anthony live his dream. They know how much it meant to him.

“When that shot went through, we all celebrated, that was a special moment,” Varela said.

“Honestly, I was in tears the entire night,” Perotta added.

It was certainly a night to remember for everyone, but especially for Anthony’s family. His parents, his sister, and his grandparents were in the bleachers. There wasn’t a dry eye.

“It was beautiful,” Jennifer Dandrea said. “He had his whole family there cheering him on, it was heartwarming to watch. It was hard not to cry during it, it was amazing.”

Anthony will graduate from Boise High this spring, and then he’s headed to Coastal Carolina University for college. Just this week, he was accepted into the LIFE program there. His family surprised him with the news at school, and it was quite the celebration.

For more information on IncludeAbility, visit the nonprofit’s Facebook page.