The Fox family totaled their original van in an accident. The community came together to get them a new van that would accommodate their young son’s wheelchair. 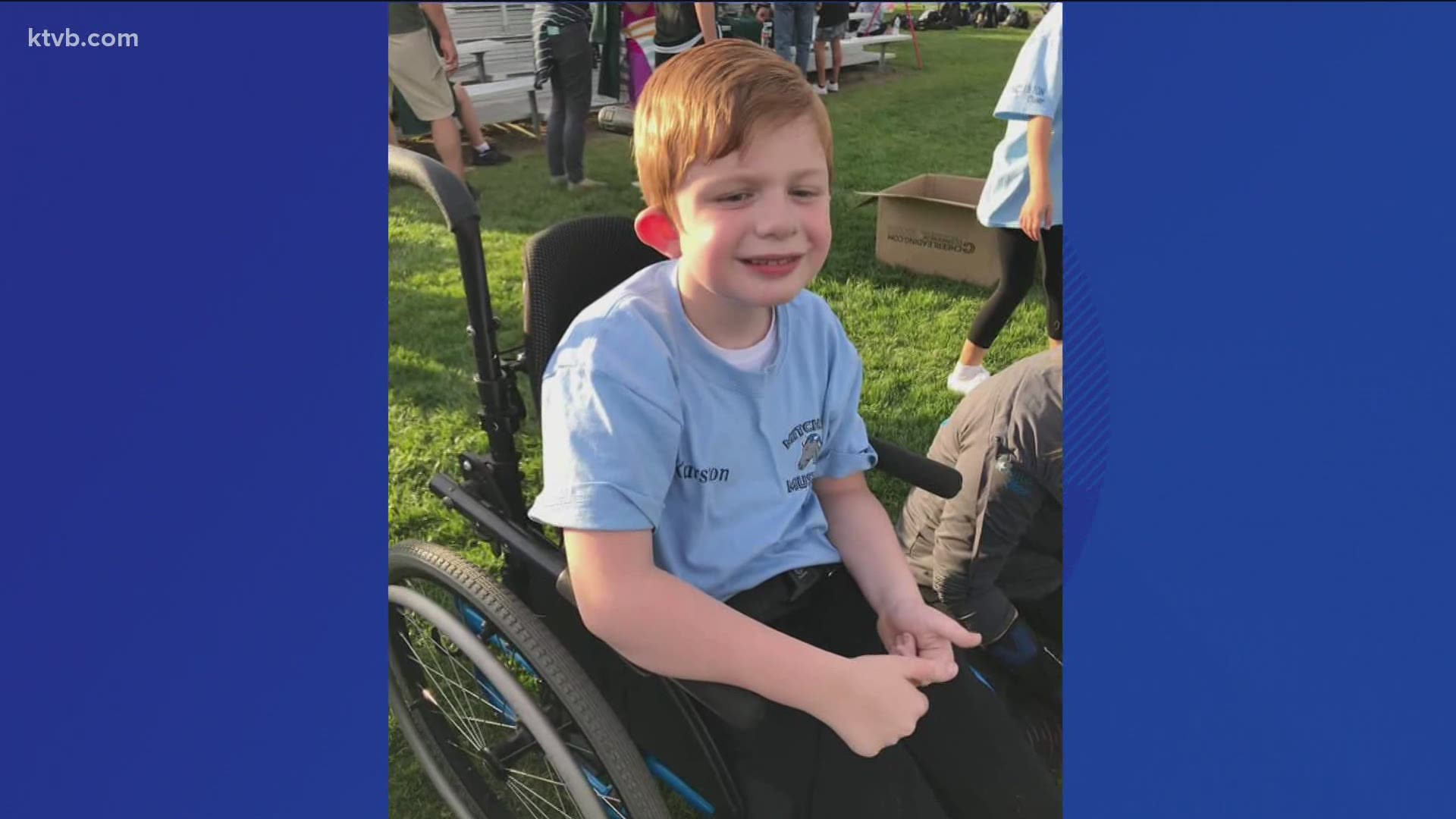 STAR, Idaho — Alex and Tamara Fox welcomed their third baby boy, Karston, to their family in 2010. The Star couple was stunned to find he was born with a condition that impacts the ability to use his legs called arthrogryposis.

“When Karston was born, we did not know that there would be any problems so it was quite the shock,” said Tamara Fox, Karston’s mom. “He's had several surgeries for his hips and legs, and there will be several more surgeries to come, but he is truly the light of our life.”

2020 was a tough year for the Fox family. Due to COVID-19, they dealt with job loss and the financial stress that comes with it.

Then, the family was involved in a car accident that totaled their van.

“Thankfully, we were protected and we are all okay," Tamara Fox said. "But it did leave us without a car. We were just kind of waiting for the insurance money to come through."

After the loss of their van, their close family friends Aymee and Jason Brainerd decided to step in and help.

“They are super special to us,” Aymee Brainerd said. “We have known them for several years, our daughter was in the first grade with Karston. They just love each other.”

Aymee Brainerd asked Tamara Fox if she was considering buying a wheelchair accessible van. The family couldn’t afford one and their old van was not wheelchair accessible. The Fox family has been lifting Karston and his wheelchair into their vehicles for years, which was starting to get more difficult for them.

“Special needs families know how critical the need for an adapted van is because they suffer long term injuries from constantly lifting their children,” Aymee Brainerd said.

That’s when the Brainerds decided to start a fundraising campaign for the Fox family.

“We just saw an opportunity to bless them and let the community that cares about them be involved,” Jason Brainerd said. “So, we organized a crowdfunding campaign and tried to share that and keep it a surprise as much as we could.”

The donations started pouring in from family, friends and people who didn’t even know the Fox family. The Brainerd's three kids even pitched in.

“They started going all over to neighbors in the surrounding area asking if they could do chores for them,” Aymee Brainerd said.

The fundraising effort brought in nearly $10,000. That money combined with the insurance payout was just enough to find a suitable van. The Brainerds started looking for the perfect fit.

#7sHero This van is a dream come true for the Fox family of Star, Idaho. It helps their 10-year-old son get from his wheelchair into the van safely, without having to lift him in. Their friends and family made this dream possible! Watch the ❤️ story tonight at 10pm on @KTVB. pic.twitter.com/G6Pcd5B8pm

“We kept looking and kept looking, and suddenly God just revealed this perfect van,” Aymee Brainerd said. "It has a special seat that comes all the way out of the car and allows him to scooch into it from his wheelchair.”

When the Brainerds surprised The Fox family with the news about the van they found for them, they were incredibly overwhelmed by the gesture. It brought them to tears.

The van was everything they had dreamed of and more.

“[Karston] loves it, it's kind of like an elevator ride for him,” Tamara Fox said. “It also saves our backs because he is 67 pounds and he's only getting bigger."

Karston’s dad Alex Fox was so humbled by the community effort for his family.

“That was just an amazing thing for us,” he said. “It's like the van was built just for him."

The Brainerds said the whole experience was so joyful for them to be a part of, and the Fox family is so grateful.

“I wish I could just write every single person a personal thank you note because they don't know how much it meant to us," Tamara Fox said. "It's just been hard, and that van is a huge blessing for our family. We couldn't have done it without them."

The Brainerds told KTVB that’s just what friends do for each other.

“That's why we love being a part of this community," Aymee Brainerd said. "We know there are so many people that would do what we did and more."

The Fox family was blessed yet again by an anonymous donor in the community. Someone gifted the family another dependable used car so that they would once again be a two-car family.

The family wants to say thank you to that donor, just in case he or she is reading this story.