7's HERO: Nampa twins with Down syndrome spread awareness about ending the use of the "R" word

Charlie and Milo McConnel are already social media stars. Their mom hopes their popularity will spread acceptance and inclusion, and end the use of hurtful words. 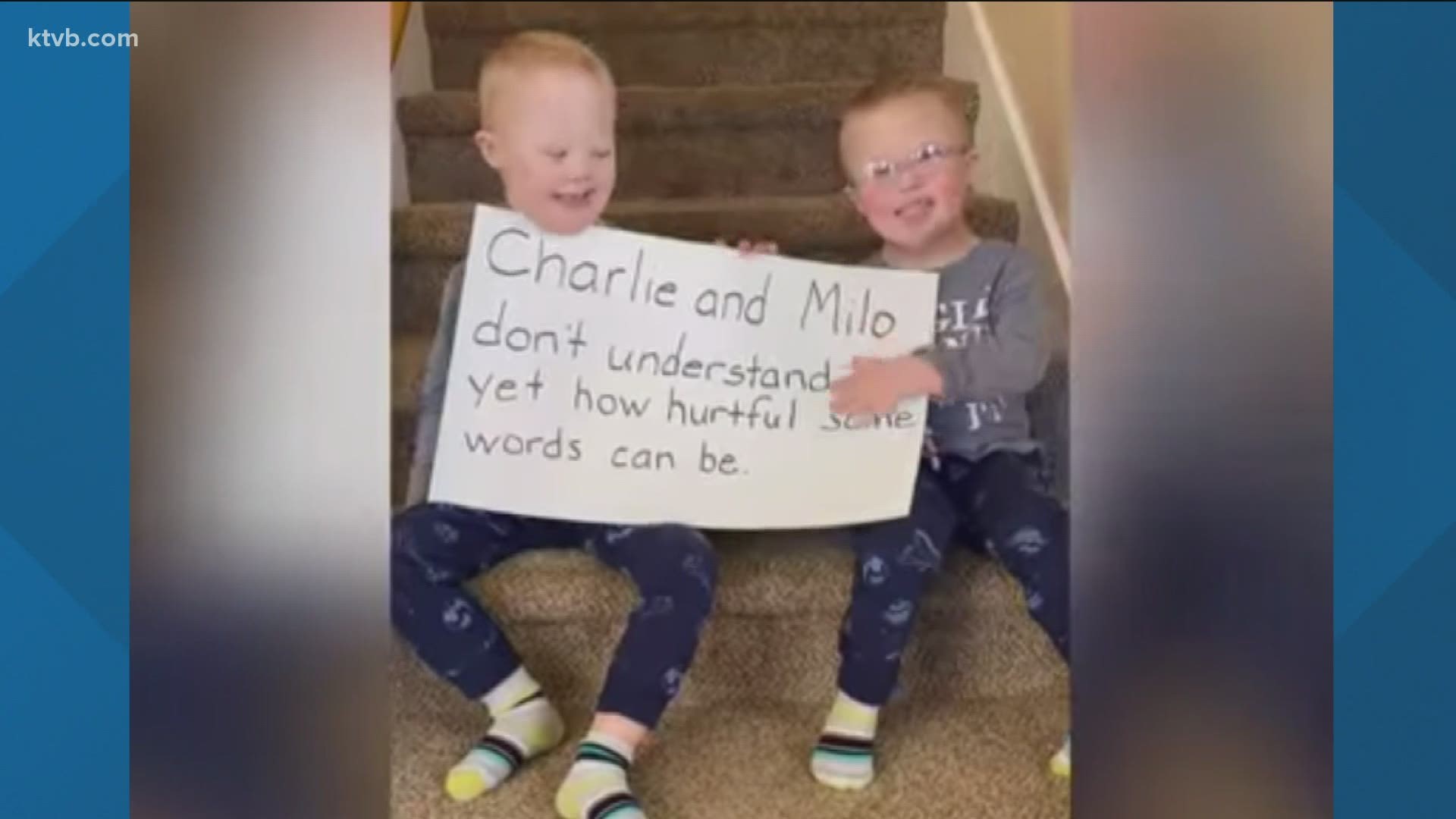 NAMPA, Idaho — Every year, March 21 is celebrated as World Down Syndrome Day, a day to promote acceptance and inclusion. Thanks to social media, the voices of people of all ages with Down syndrome around the globe are growing even louder.

Two social media superstars in the Down syndrome community live in Nampa. Charlie and Milo McConnel are five-year-old twin boys, and they have stolen hearts all around the world. Their devoted mom, Julie McConnel, is on a mission to make the world a better place for her sons and for all people with disabilities.

"March 21 is World Down Syndrome Day," McConnel said. "It's the 21st day of the third month, and Down syndrome occurs when you have a third copy of the 21st chromosome, so that's why that day is the day, and it's celebrated all around the world."

Two years ago, KTVB first brought you the story of Charlie and Milo McConnel, when they were just starting to develop a following on social media. The story was picked up by TODAY.COM, something McConnel said was life-changing.

"It just went crazy from there," she said. "It has just really blown up into this phenomenon that I didn't even see coming."

Now, these adorable boys, also known by their nicknames Chuckles and Meatloaf, are bonafide social media stars. They have close to 300,000 followers on their social media accounts. You can find them on Facebook, Instagram, and even TikTok.

What makes the twins even more special is they are fraternal twins. That means, genetically, they are simply brothers who both happen to have Down syndrome. Usually, twins with Down syndrome would be identical.

"They are exceptionally rare, so I think that gets them that initial attention," McConnel said. "Once we get you in the door, we really want to educate and raise awareness and advocate for people with Down syndrome and any disability."

McConnel is the ultimate advocate for her boys. A few weeks ago, she decided to tackle a painful word in the Down syndrome community - the slur "retard", or "retarded", also known as the "R" word.

"The "R" word, years ago it was an acceptable medical term for someone with an intellectual or cognitive disability," McConnel explained. "But over time, it really just became an insult. It's hurtful, it's painful, it hurts our families. I know for a lot of people that word is just a habit, and it was a habit for me when I was younger. It just never occurred to me that it would be hurtful to someone. It never crossed my mind and I think a lot of people are in that same boat. So now, we're just trying to educate so when people know better they can do better."

McConnel put out a call for teens and adults with Down syndrome to share how they felt about the "R" word.

"Charlie and Milo are five and they don't really understand the power of hurtful words yet, but someone who is an older teen, a young adult, a grown adult, they understand very well what that "R" word means," she said. "I felt like it was really important to reach out to adults and older teens with Down syndrome and find out what they had to say."

Today is March 21, #WorldDownSyndromeDay! It’s a day to celebrate and raise awareness. Charlie & Milo McConnel of Nampa are adorable twins, with a huge social media following. Tonight on @KTVB, find out about their latest viral video - changing hearts around the world! #7sHero pic.twitter.com/5HfXyJhjHs

She was blown away by the response she received, and she put together a touching video with the help of Charlie and Milo. That video went viral and has been liked and shared thousands of times.

"I felt like the video was so powerful, because of what they had to share. That's what matters. If they say, 'That word is hurtful, it makes me feel less than, it makes me feel bad, it makes me feel not worthy,' then we need to listen to that, and respect that," McConnel said. "The response has been overwhelmingly positive, and I think people are really touched. I think it really gets straight through to your heart."

McConnel and the twins will continue to advocate for all people with disabilities on social media for as long as they can. The goal is to make the world a better place, not just for her precious boys, but for those without a voice.

For more information on ending the use of the "R" word, click here or visit their social media accounts: