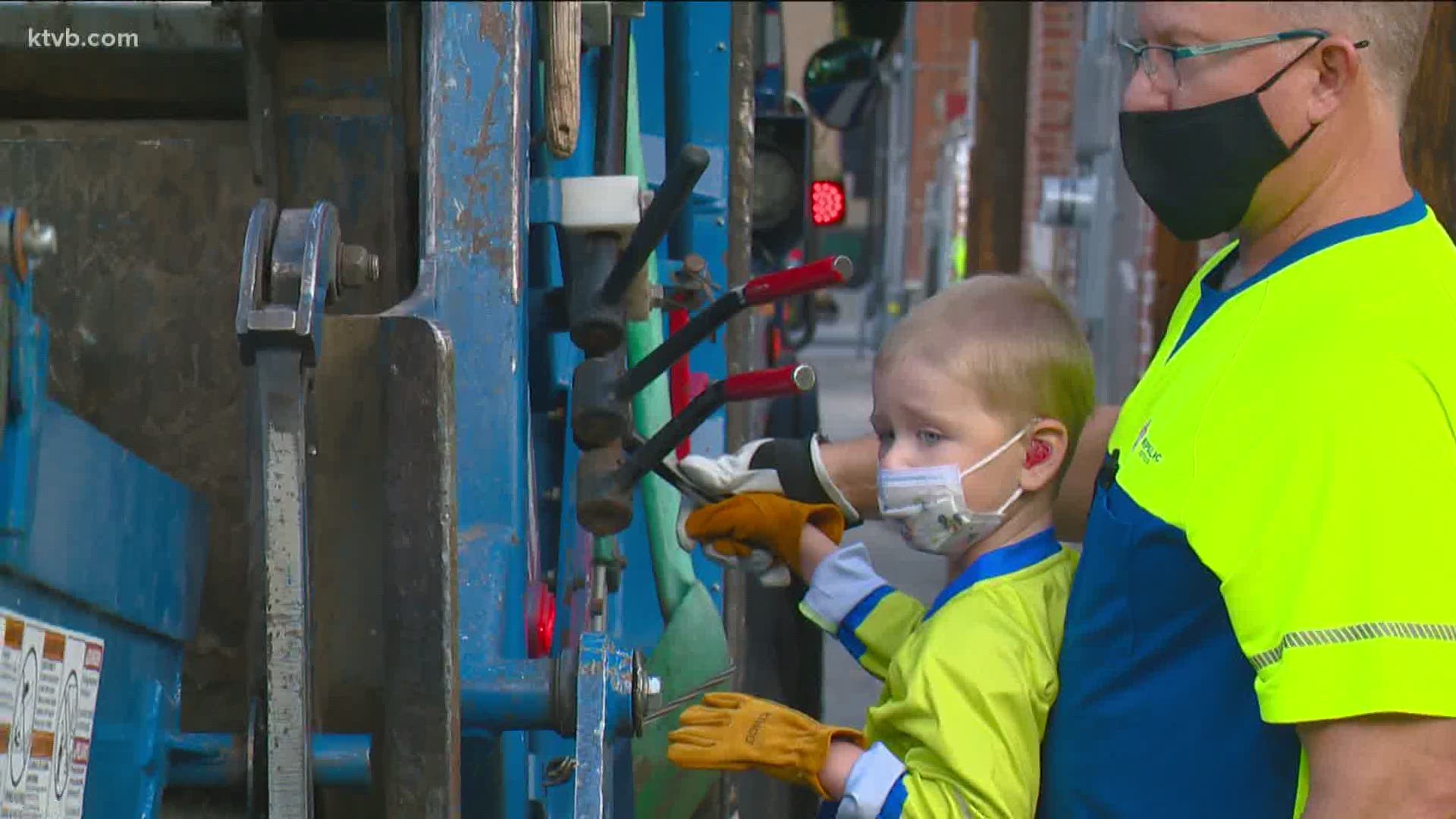 BOISE, Idaho — Three-year-old Leo Martin of Boise has always loved garbage trucks. He has all kinds of toy trucks to play garbage man with, he loves to sort the trash, and dump it! Just ask his mom, Shannon.

“He's always enjoyed dump trucks. When he was really little, we'd take our dog for a walk and we'd be out when the garbage trucks were doing their route, and so he really loved watching the bins dump, and he copied the sounds,” Shannon Martin said with a smile. “At home, he helps sort the recycling from the garbage, he just loves it.”

Leo was also diagnosed with a brain tumor a year ago, at the age of two. It was a heartbreaking blow for his parents. Leo has spent a lot of time in the hospital and in treatment, his dad Brian says he’s a fighter.

“He completed five rounds of chemo and three transplant rounds. After the treatment, his MRI came back negative so there is no tumor left,” Brian Martin said. “We've already had our first three month MRI which came back negative, which is great! So, it's just a hoping and waiting game at this point. He's done really well, he's doing great.”

When Make-A-Wish asked what Leo would like to do for his wish, his parents say it was a no brainer. Leo wanted to be a garbage man!

Make-A-Wish President and CEO Janie Best told KTVB that during the pandemic there have been travel restrictions on making wishes come true for Idaho children battling life-threatening illnesses. They were thrilled they could make Leo’s wish happen right here in the Treasure Valley. Make-A-Wish contacted Republic Services.

“We were excited about the opportunity, it's not every day that somebody chooses us over say, a Disneyland,” said Bob Bennett, the general manager of Republic Services.

Republic Services put a team together to work with Make-A-Wish to help Leo’s garbage man dreams come true. When the special day arrived, Leo was ready.

“He’s been practicing,” Shannon said. “Setting up a route and putting on his gloves and his uniform. This morning he said I need to get ready for work, I need to put my uniform on.”

Republic’s Garry Packwood was thrilled to be Leo’s driver.

“To me, it was pretty humbling I think about kids and what they can wish for, and to want to come be a garbage man for the day was pretty awesome,” said Packwood. “I have two grandkids that are Leo's age so it hit home for me, it was amazing, truly amazing.”

Leo’s dad says they spent the day doing all the garbage man things, and more! They drove all over town. It was everything his little boy could want.

“We started out at the facility and he got to tour the trucks and the maintenance area, then he got to ride in the garbage truck and go pick up and dump some big bins” Brian said. “Then we drove over here to the landfill. Leo got to dump all that trash!”

The Republic Services employees involved in the wish were so happy to be a part of Leo’s special day.

“As excited as he was, I think we were equally excited to put it together,” Bennett said. “This is a big deal for us, this is one of those feel-good days where we really feel that we get to give back. It has been a great day for us that we are going to remember for a long time.”

Leo’s parents were overjoyed to see their little warrior having so much fun.

“I just think it's such a special thing for him to get to do,” Shannon said. “Thank you to Republic Services, thank you to Make-A-Wish.”

Leo’s favorite part of the day? Getting to dump the big bins!

“We just can't thank them enough, this has been really amazing, we really appreciate it,” Brian said.