The man lost his prosthetic leg while floating down the Boise River. Three local men jumped in to help after seeing a post about the missing leg on Facebook. 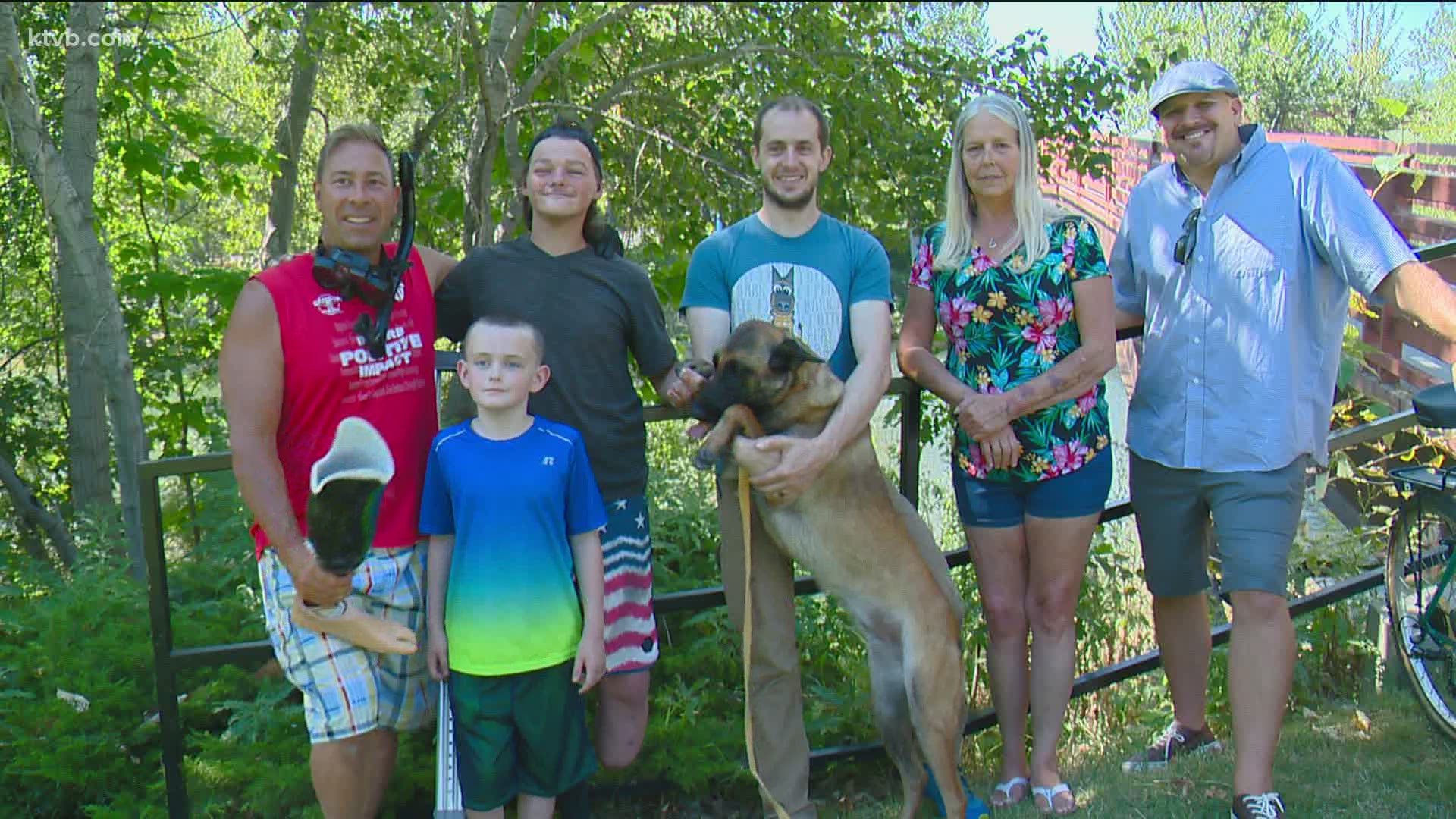 BOISE, Idaho — 2020 has been a tough year for 22-year-old Jacob Welty of Nampa. He was severely injured in a car accident in January.

“I have a titanium rod where my femur is supposed to be. I've had my shoulder fully rebuilt, and had my leg amputated,” Welty told KTVB. “I just actually got my prosthetic about three weeks ago."

A week ago, Welty was floating the Boise River with some friends, when his new prosthetic leg slipped off into the rushing water.

“My prosthetic fell off and I jumped in after it, I grabbed it, but it floated away, so I couldn't reach it,” Welty said. “In a blink of an eye it was gone, so I kind of freaked out and started bawling.”

Jacob's mother, Vicki Welty, couldn't believe it. She was so worried when she heard it had been lost, she said there was no way they could afford a new prosthetic. Welty told us their insurance will only pay for one, and prosthetics cost thousands of dollars.

“Devastation is the word I could use for it, he's been through so much,” Vicki Welty said. “It just broke my heart. I didn't know what to think, the first thing I could think of was Facebook. Jump on Facebook and get it on there and hope that somebody could find it."

So, that’s exactly what she did. Her post was shared hundreds of times, so many people wanted to help.

“It was awe-inspiring,” said Jacob, he was so surprised by the reaction.

“That post brought us all together, it was very much a community thing,” said Douglas T Campbell, Jr.

Campbell just happened to be floating the river at the same time as Jacob on the day he lost his leg. He knew he could help with pointing out where it happened.

“He was pretty upset about losing his prosthetic limb,” said Campbell. “I knew the location pretty well."

Israel Shirk also saw the post and had his own special reason why he wanted to help find Jacob's leg.

“I have a younger brother, Ben, who lost a leg below the knee as well,” said Shirk. “He’s got a really similar leg as well, and just knowing the cost and what that means to him, I knew I had to help.”

Shirk ran into the third person involved in the search, Rocky Detwiler, on the river bank. He also heard about it on Facebook. He actually had some experience searching for missing legs. He found another one that was lost last summer in the river!

“When I saw the post about a prosthetic leg, I dropped everything and just jammed to the river,” he said.

Detwiler told us it only took a few sweeps of the water in the area where Jacob lost the leg, to locate it.

“I came out of that river with the leg, and then the loudest wahooooo! We found it! It was right where Douglas said it was," he recalled.

“They called me and said, 'Oh well, your leg is not in the water,' and I was like - oh shoot,” Welty said. “Then Rocky said, 'That's because I pulled it out of the water!' I was like, awesome! I was super excited to have my leg back!”

Jacob’s mom was brought to tears by the news.

“I don't even know how to explain it, it was such a relief and such a blessing that these guys got together," she said.

For these three heroes, the best part of this was meeting Jacob and returning the leg.

“When we gave it to Jacob, we hugged for three minutes,” said Detwiler. “I've never met this kid before. I'm in tears, he's in tears, mom's in tears, and when you can find something like this and give it back to someone, that's a big deal.”

“Thank you you guys are my heroes! I love you guys for what you did for us, for my son! God bless you, God bless you all," she said.

Jacob’s leg does need some repairs. Thompson, Shirk, and Detwiler helped him put together a GoFundMe to cover the repairs.

Also, Rocky Detwiler, the man who dove for the leg, was inspired to start a Facebook page for people who lose things in the river, called River Robinhood. He said he's happy to help if you lose something precious in the water.