The pilots were on a routine training flight when their Black Hawk helicopter went down near Lucky Peak. 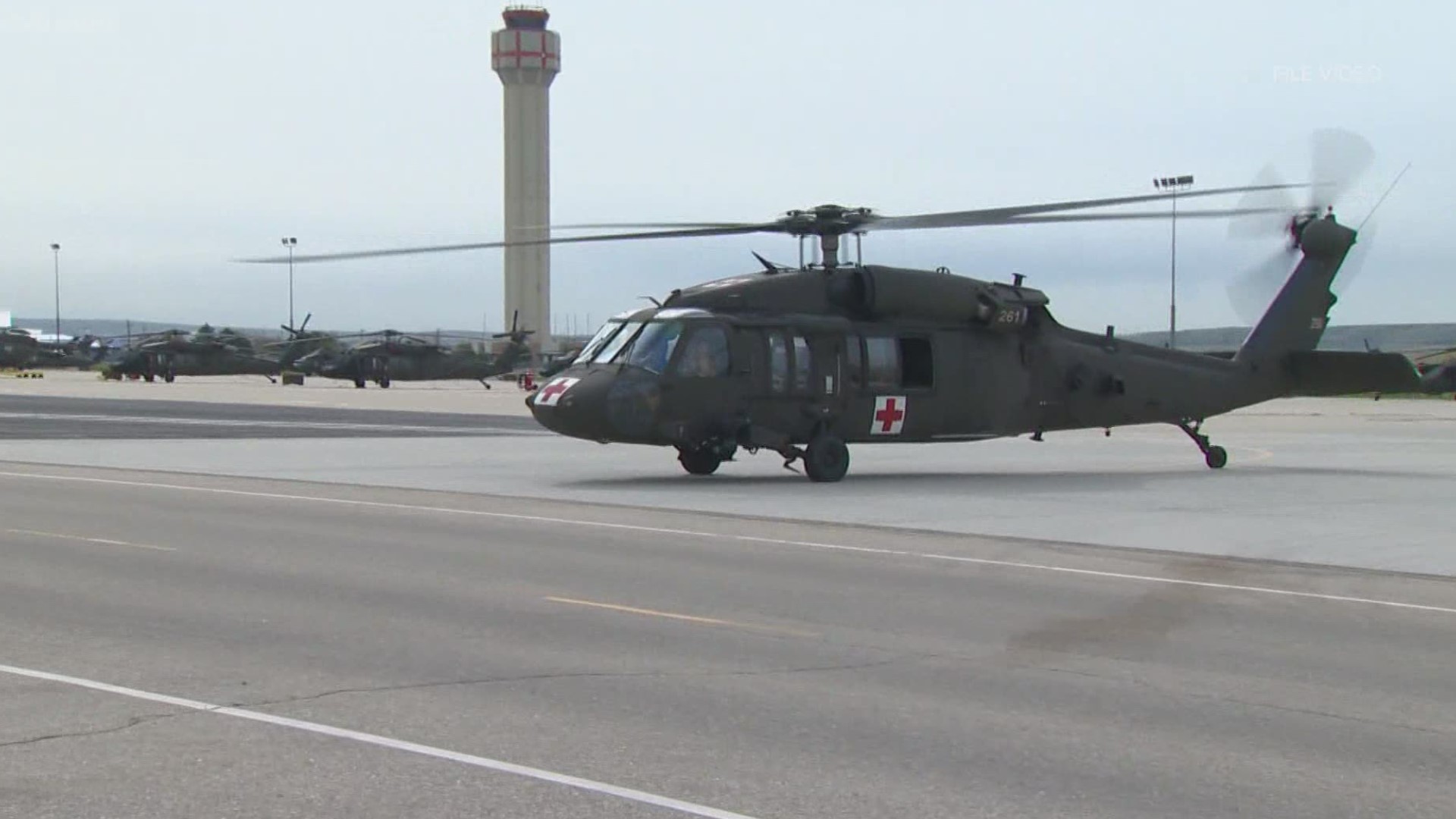 BOISE, Idaho — The three members of the Idaho Army National Guard who died in a helicopter crash Tuesday night were experienced pilots on a routine training mission, officials said.

The UH-60 Black Hawk crashed just after 8 p.m. south of Lucky Peak, near Three Point Mountain in the Danskin range. There were no survivors.

The names of the pilots killed have not yet been released, but 183rd Aviation Battalion Commander Lt. Col. Nicole Washington said that two of the guard members were instructor pilots, and that the trio had "thousands of hours" of flight time between them.

Washington added that the 183rd is an "extremely close-knit unit" and that she knew the three pilots personally, not only as their commander, but through deployments as well.

"They are an intricate, necessary part of our community and they will be missed," she said. "There's no way that we'll be able to replace or fill the void that they have left."

Investigators are still working to figure out what went wrong. The Black Hawk took off on the mission - described as training in mountainous-area flying with some emergency procedures - at 6:50 p.m., and checked in via radio multiple times. The last transmission from the crew, made at 7:45 p.m., relayed that they had finished their final maneuver and were heading back to Boise. None of the pilots ever issued a Mayday call or indicated any distress, officials say. 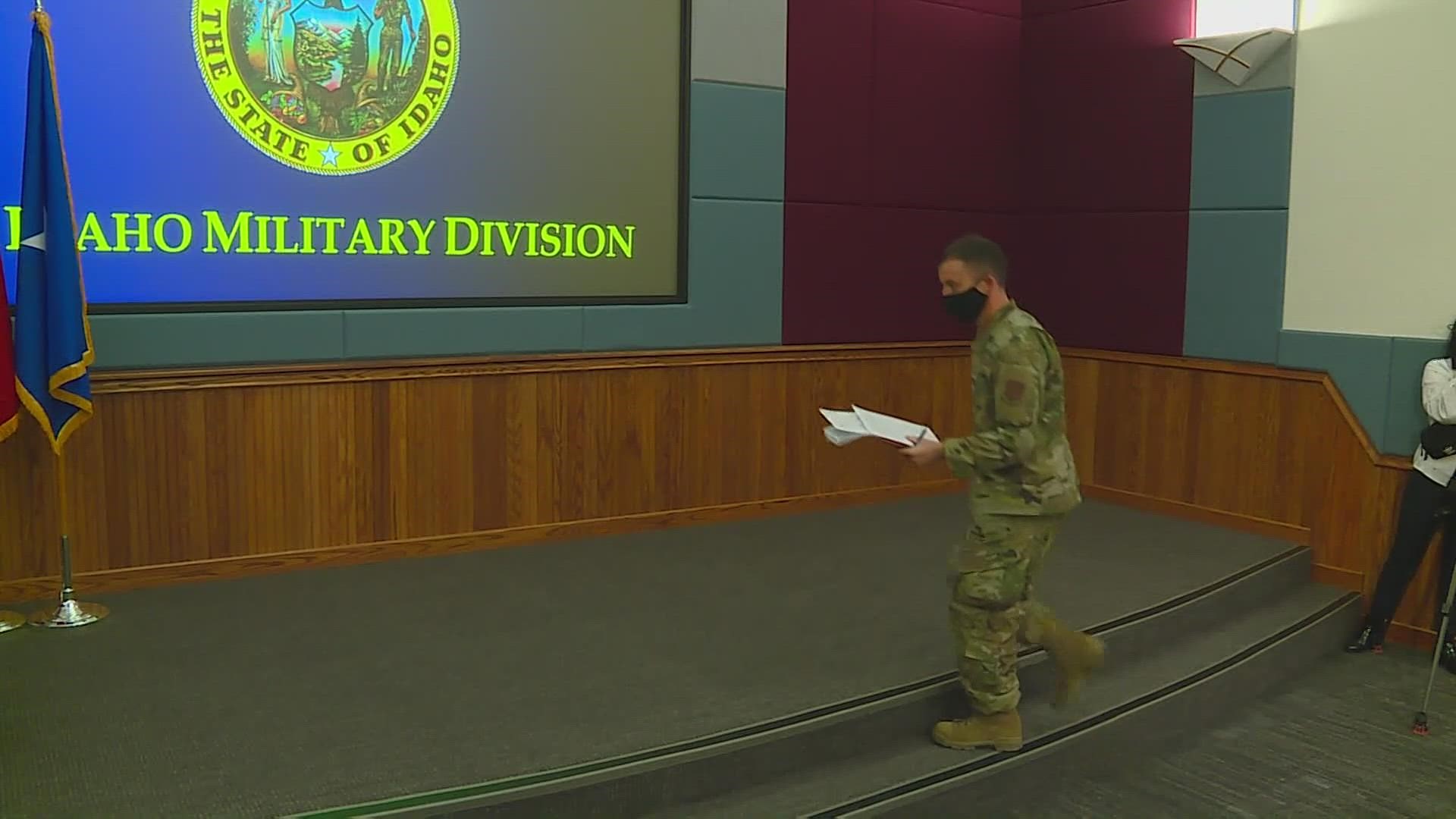 Col. Christopher Burt, the Idaho Army National Guard’s state aviation officer, said the first sign that something was wrong came about 20 minutes later, when the Air Force Rescue Coordination Center contacted the Idaho National Guard to report that there was an active emergency locator transmitter signal coming from the Black Hawk helicopter.

"They were able to give us a grid, which was in the vicinity of Three Point Mountain, east of Boise in the Danskin Mountains. This gave us a starting point to search," Burt said. "We immediately launched our emergency response plans in an effort to locate the aircraft."

Another aircraft in the area immediately headed for the zone from which the emergency transmission was coming, but snow flurries and heavy fog rolled in quickly, hobbling the search.

"There was weather last night, so there was snow, we do know that from the aircraft that tried to locate them that was out at the same time," Washington said. "They tried three different times through low passes to get to that area but the ceiling layer coming down combined with snow made it untenable for them to be able to get in."

The Idaho National Guard dispatched a ground crew, with help from members of Idaho Mountain Rescue, to search on foot, and by 11 p.m., the weather had cleared enough to launch another aircraft, he said.

The wreckage of the helicopter, and the bodies of the three pilots, were discovered at 12:15 a.m.

The crash site has been secured, Burt said, and the recovery process will continue throughout Wednesday.

"This morning my office has been flooded with countless messages from members of our community here in Idaho, as well as from friends and colleagues from across the nation," he said. "On behalf of each of them, and on behalf of the Idaho Army Aviation Group, I extend the deepest of sympathies to the families, loved ones and friends of these of these amazing Americans."

Idaho Gov. Brad Little has ordered flags flown at half-staff in honor of the three guard members, beginning Wednesday and continuing until the last pilot is laid to rest. Lawmakers also weighed in online to express their sorrow at the deaths of the pilots.

"I just ask everyone to think about everyone that serves, particularly the National Guard and what they do every day and the risks that they take, but also their families and their neighbors, and how critical it is that we continue to show support for them, particularly during this very difficult time," the governor said.

It's unclear what role, if any, Tuesday's snowstorm played in the crash. The crew had completed risk assessments and knew that there were showers in the forecast, Washington said, adding that the three pilots were all wearing night-vision goggles and had experience flying in adverse weather conditions. Practicing flying in the mountains and in snow and rain is crucial training for guard members who may be called upon to handle search and rescue operations or other missions at any moment, she said.

"It's important for us to put ourselves in those conditions in those positions to know how to train, because we understand that whenever we go out to save someone it's not going be always be ideal conditions," she said. "We will have to land in mountainous areas, we will have to go out in bad weather. So for us in the army to try to train as we fight and train our aviation personnel to be the most proficient, so that we can go out and provide that same support to the state."

A full investigation into the crash is underway, and all Idaho National Guard flying operations have been halted for the time being.

In 2020, the state aviation group based out of Gowen Field assisted in six different search and rescue missions. The group, which uses Black Hawk and Lakota helicopters, rescued people in Blaine, Boise, Custer and Elmore counties.

During the summer of 2020, three Black Hawk helicopters were sent to California to help the state fight wildfires. Two more were sent back in September to continue fighting. The crews dumped more than 80,000 gallons of water in their efforts.

In the summer time of 2019, they were deployed to Guatemala in support of the "Beyond the Horizon" exercise, a joint humanitarian effort in Central American.