"Their tragic deaths leave an emptiness in the lives of their families and loved ones, the entire National Guard community, and all of us," Gov. Brad Little said. 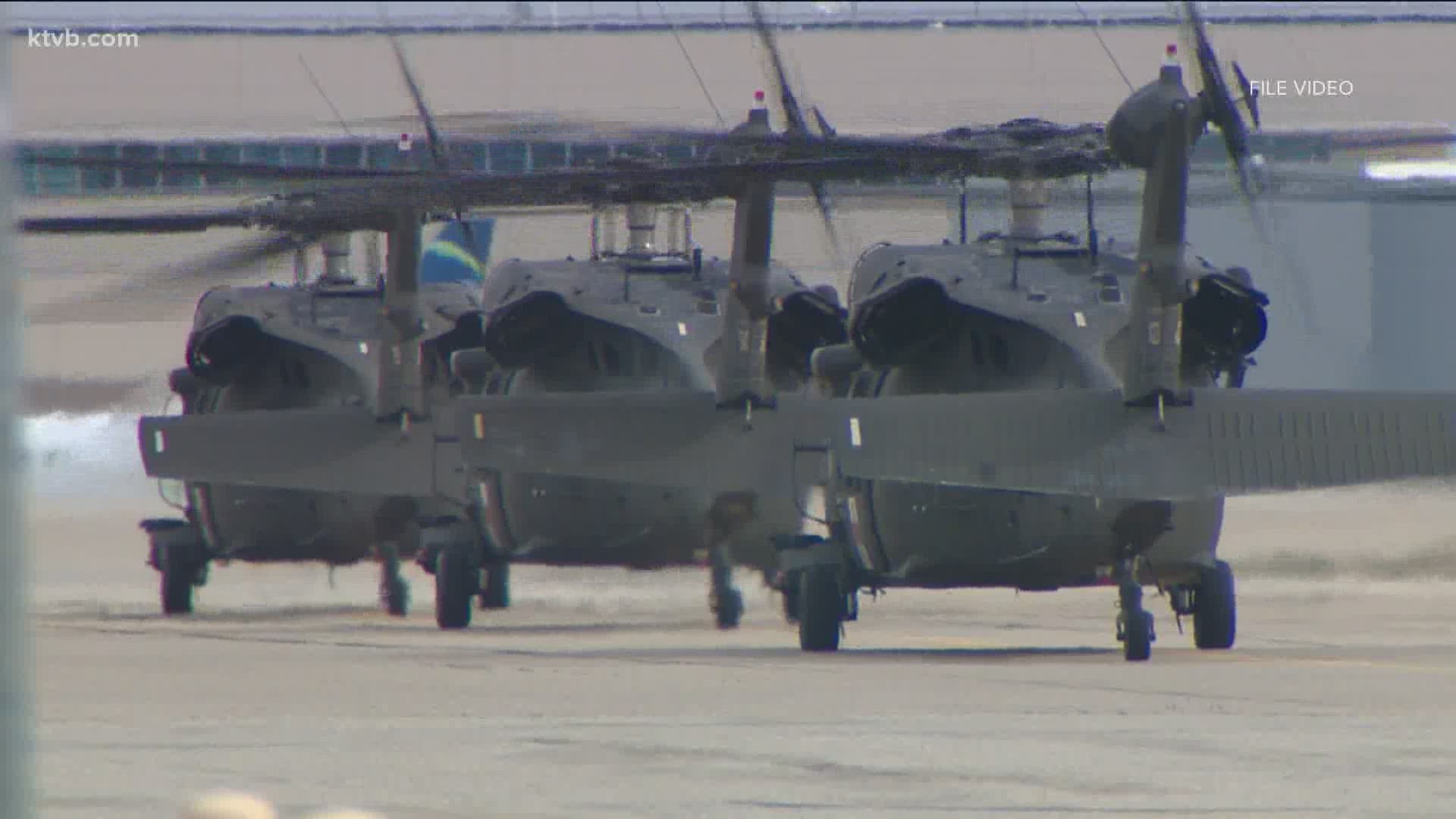 BOISE, Idaho — Elected officials took to social media Wednesday to express their shock and sorrow in the wake of a helicopter crash near Boise that killed three pilots with the Idaho Army National Guard Tuesday night.

The Black Hawk helicopter went down south of Lucky Peak in the Danskin Mountains at about 8 p.m. during a routine training mission. Snow and fog had rolled quickly into the area during the training, officials say, but it is unclear what role weather played in the crash. All three guard members were experienced pilots, skilled in flying in adverse weather, according to the National Guard.

The names of the pilots have not yet been released. Recovery efforts from the crash site are underway now.

Idaho Gov. Brad Little ordered flags be flown at half-staff in honor of the three service members, beginning Wednesday and continuing until after the last pilot is laid to rest.

"Our hearts are heavy today as we mourn the loss of three brave and talented pilots killed during the service of our state and nation," Little said in a video posted on Twitter. "Their tragic deaths leave an emptiness in the lives of their families and loved ones, the entire National Guard community, and all of us."

I have ordered flags to be flown at half-staff in honor of the three Idaho Army National Guard pilots killed in a helicopter crash near Boise Tuesday night. Please join me in prayer for the heroes we lost and seek to comfort all the lives they touched. pic.twitter.com/1eGFOgylr5

All four members of Idaho's congressional delegation weighed in online as well to praise the fallen aviators and offer condolences to the people who loved them.

I’m shocked & saddened to learn of the deaths of 3 helicopter pilots w/ the @IDNationalGuard in a training exercise last night. Mine & Vicki’s prayers are w/ their families & all ID National Guardsmen during this painful time & thank them for their service to Idaho & the nation. https://t.co/OBP4JnlkJj

Kathy and I are praying for the families and friends of the three Idaho National Guard soldiers who were killed during a training flight last night. Our citizen-soldiers embody a spirit of service and the best of American patriotism, and this loss is felt deeply throughout Idaho. https://t.co/IvQvboxtrr

I am saddened to learn about the passing of three brave pilots of the @IDNationalGuard last night during an exercise training. My condolences are with the family and friends of our heroic Idaho National Guardsmen. https://t.co/qTkjuYZbvT

This morning, I learned of the tragic loss of three Idaho National Guard pilots during a training flight. To the families of those pilots involved, you are in my prayers as our state mourns the passing of three of its heroes. pic.twitter.com/i979xtTGv0

Boise Mayor Lauren McLean also took to Twitter to express her sadness over the deaths.

"This morning, our community woke to the awful news of a helicopter crash last night that killed 3 Idaho National Guard members. This devastating tragedy is felt throughout our city, state and country," the mayor wrote. "I extend my deepest gratitude for their service and sorrow for their ultimate sacrifice. Scott and I join our community in praying for their families and loved ones."

This morning, our community woke to the awful news of a helicopter crash last night that killed 3 Idaho National Guard members. This devastating tragedy is felt throughout our city, state and country.

The Idaho National Guard is launching an investigation into the Black Hawk crash, and flying operations have been suspended for the time being.