'We had zero complaints': Idaho National Guard leaders saw no issue with conditions during D.C. deployment

Controversy quickly spread online after pictures of troops in a parking garage were posted. 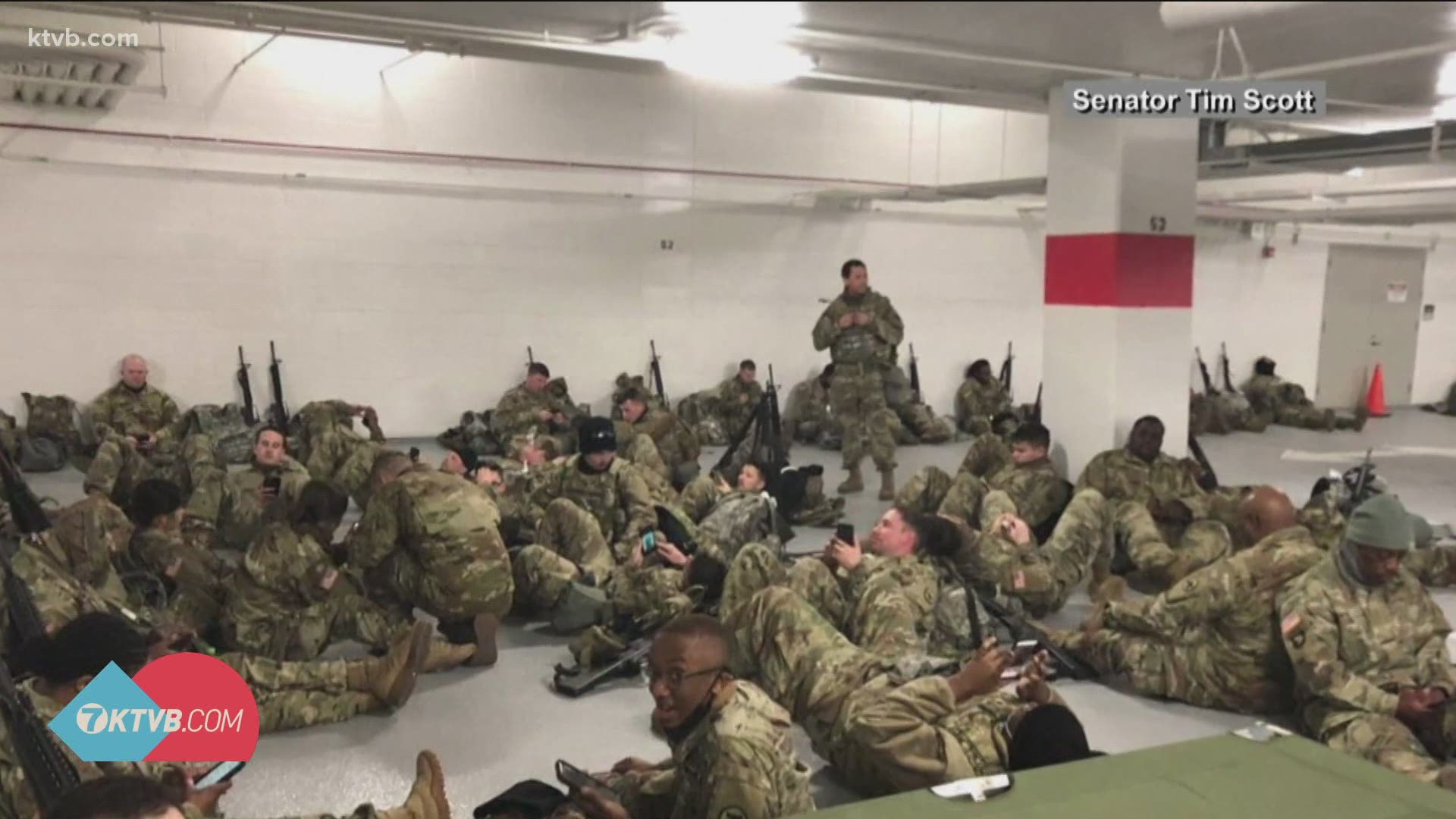 BOISE, Idaho — On Sunday, Gov. Brad Little welcomed home members of the Idaho National Guard who were sent to help with security operations during inauguration week in Washington, D.C.

A comment on the governor’s Facebook post welcoming the troops home echoed concerns from Idahoans. Rep. Chad Christensen wrote in-part that while in D.C., soldiers were treated like they were deployed to a third-world country.

“I received pictures and texts from guardsmen and I’ve seen pictures of them in parking garages on cots," Christensen wrote. "They’ll survive, I’m not saying that, but to be in that unsecure parking garage I think is kind of an issue."

Images and videos of troops in parking garages were quickly shared around social media in the days following the inauguration. Idaho Sen. Mike Crapo tweeted out that they “deserve better treatment than this.”

“I think some people were upset that we were in a parking garage, but we were talking about how nice it was compared to the Orchard Combat Training Center where we usually go every summer to train or the National Training Center in California,” said Lt. Col. Steve Arnett with the Idaho National Guard.

KTVB spoke with Arnett fresh off the plane Sunday evening after returning from the nine-day D.C. mission. Other leadership with the guard agreed with his perspective.

Edwards was assigned as the non-commissioned officer in charge for Task Force Idaho in the nation's capital. He said troops spent time in a parking garage, but it was not a significant amount of time.

“That parking garage was warm, it provided cover, a provided a place of refuge for our soldiers for a few hours while they were not standing at their post outside of the Capitol in cold weather,” Edwards said.

Earlier in the week troops had gone inside the U.S. Capitol for breaks but ahead of inauguration day were asked to relocate so the Capitol could be deep cleaned. Edwards says the heated garage was a short walk away.

“It provided the things that our soldiers wanted, which was refuge and they wanted to be out of the public view so that they could take their body armor off, so they felt they were in a secure location,” Edwards said.

He added that after the 12-hour shifts, troops stayed in very nice hotels in the D.C. area.

Christensen told KTVB that he received texts and photos from guardsmen about the conditions.

“We didn’t, we didn’t have any soldier issues we had zero complaints from our soldiers they absolutely conducted themselves professionally they did not complain about the conditions,” Edwards said.

According to Edwards, the troops appreciate the huge support from people calling for better conditions while in D.C. but noted that they were fine and have certainly faced worse.

“A few of the soldiers that I’ve talked to actually kind of took offense to that - 'Do the American people think we are really not tough enough to handle this?'” Edwards said. “I love that the American people want to stand up, they want to support American soldiers and we love that support and welcome that support. In this particular case in the parking garage, that was not a bad condition for where we were.”