The Broncos take their 10-game conference win streak on the road for a Halloween day matchup against Air Force. 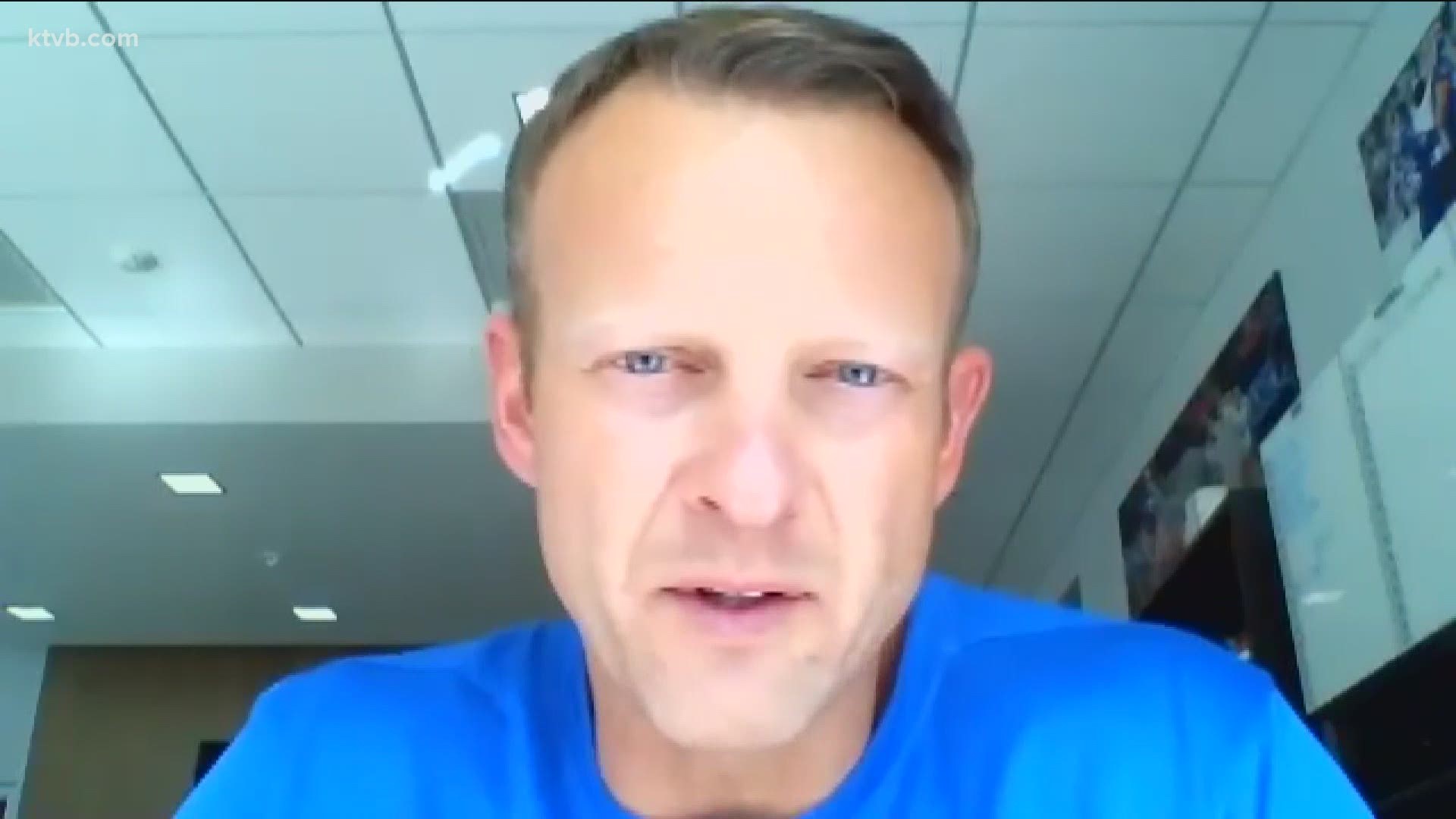 BOISE, Idaho — The Boise State football team will play its first road game of the season as the Broncos travel to Colorado to take on the Air Force Falcons in a Halloween day matchup.

Saturday's game is set to kick off at 4 p.m. and will be broadcast nationally on CBS Sports Network.

Quarterback Hank Bachmeier effectively put the disastrous 2019 Las Vega Bowl behind him - passing for 268 yards and three touchdowns without an interception. He also rushed for a TD. The sophomore signal-caller spread the ball around, completing passes to eight different players, but Khalil Shakir - who hauled in a career-high 123 yards and two touchdowns - was the primary benefactor of Bachmeier's stellar game.

The Broncos' defense was also in top form on Saturday, limiting the Aggies to just 45 yards in the first half and 203 yards total. They also registered three sacks in the game.

Boise State's strong showing in Game 1 landed them in the AP Top 25 - at No. 25 - where they join several other teams from outside the Power 5 conferences.

Meanwhile, Air Force, one of the top teams in the conference last season, holds a 1-1 record after losing 17-6 at San Jose State last Saturday. The Falcons previously beat Navy 40-7 in the season-opener.

The academy has been dealt several setbacks leading up to, and during, the 2020 season, not the least of which was having about 40 players opt out of the season due to the COVID-19 pandemic. Three starting players were unable to play in Saturday night's loss to San Jose State, due to coronavirus concerns.

Another challenge for Air Force was the loss of quarterback Donald Hammond III - a preseason candidate for the Davey O'Brien Award. Academy officials said over the summer that he was “no longer a cadet in good standing," and therefore no longer on the team. Sophomore Haaziq Daniels - the next man up - is now the Falcons' starting quarterback.

Boise State has won 10-straight Mountain West games. But given the history between the teams - each has a three-game win streak over the last six seasons - Boise State coach Bryan Harsin isn't taking anything for granted.

"It's a new challenge, a new opponent, some more adversity we're going to have to face by traveling and having to worry about those things that come along with that," Harsin said at his weekly news conference on Monday. "Obviously our opponent, playing at Air Force, that's not an easy place to play for us, and I think our guys understand that."

RELATED: Coach Harsin expects 'more adversity' when the Broncos hit the road for the first time this season

The game will be televised on CBS Sports Network (Carter Blackburn, Aaron Taylor, Jenny Dell), which can be found on the following channels:

KTVB's Bronco Roundup Game Day show will be live from 9 to 10 a.m Saturday morning on KTVB, KTVB.COM, and on the KTVB mobile app. Join Jay Tust, Will Hall for a look at all of the major storylines surrounding this matchup.

The Broncos jumped into the AP Top 25 at No. 25 following their season-opening win against Utah State last weekend. They join a handful of other so-called Group of Five teams in the rankings, including Cincinnati (No. 7), Marshall (No. 19), Coastal Carolina (No. 20), and SMU (No. 22).

While not technically a Group of Five team because it's independent, BYU is undefeated and ranked No. 11 in the AP poll. The Broncos will face the Cougars in a highly-anticipated matchup at Albertson Stadium on Friday, Nov. 6.

In the Coaches Poll, Boise State is fourth on the "others receiving votes" list, essentially putting the Broncos at No. 29 in that poll.

Boise State has been nationally ranked in 19 consecutive seasons, tied for the seventh-longest active streak in the nation.

KTVB sports analyst Tom Scott in his Scott Slant columns this week threshed out a couple of streaks that are on the line as the Broncos head to Colorado:

Something’s gotta give when Boise State goes to Colorado Springs for Halloween. Something already gave for Air Force last Saturday. The Falcons’ nine-game winning streak, which had been the second-longest in the nation, is kaput following their surprising 17-6 loss at San Jose State. Air Force has, however, won nine consecutive home games, a streak dating back to November of 2018. It’s the ninth-longest active home streak nationally (the Broncos have won eight in a row in the blue turf). Boise State carries a 10-game Mountain West winning streak into Falcon Stadium, the third-longest active conference run nationally and longest by the Broncos since they joined the league in 2011.

And then there's this from Scott - Boise State running back George Holani is still on track to give the Broncos their 12th-consecutive 1,000-yard rusher:

We had already done the math. If Boise State plays 10 games this season, its leading rusher (presumably George Holani) would have to average 100 yards per game for the Broncos’ 11-year streak of 1,000-yard rushers to be extended. So against Utah State, Holani went out and rushed for exactly 100 yards. Uncanny. The thing to remember, though, is that he did it on just 14 carries, averaging 7.1 yards per tote. Holani’s best run of the night actually came on a reception, as he wove through and bounced off bewildered Aggies defenders for a 17-yard touchdown. I’d rate his 34-yard run in the fourth quarter a close second.

Boise State holds a 5-3 advantage in the all-time series between the two squads. Air Force's wins came during a three-game winning streak between 2014 and 2016.

Both teams were ranked in the AP Top 25 when they met at Albertsons Stadium last season. The Broncos won that game 30-19, their third consecutive win against the Falcons. Air Force went on to a school-record 11 wins and were ranked one spot ahead of Boise State in the final AP poll.