With their fourth loss of the season through the first half of the regular season, the Broncos have already matched their worst season since 2015. 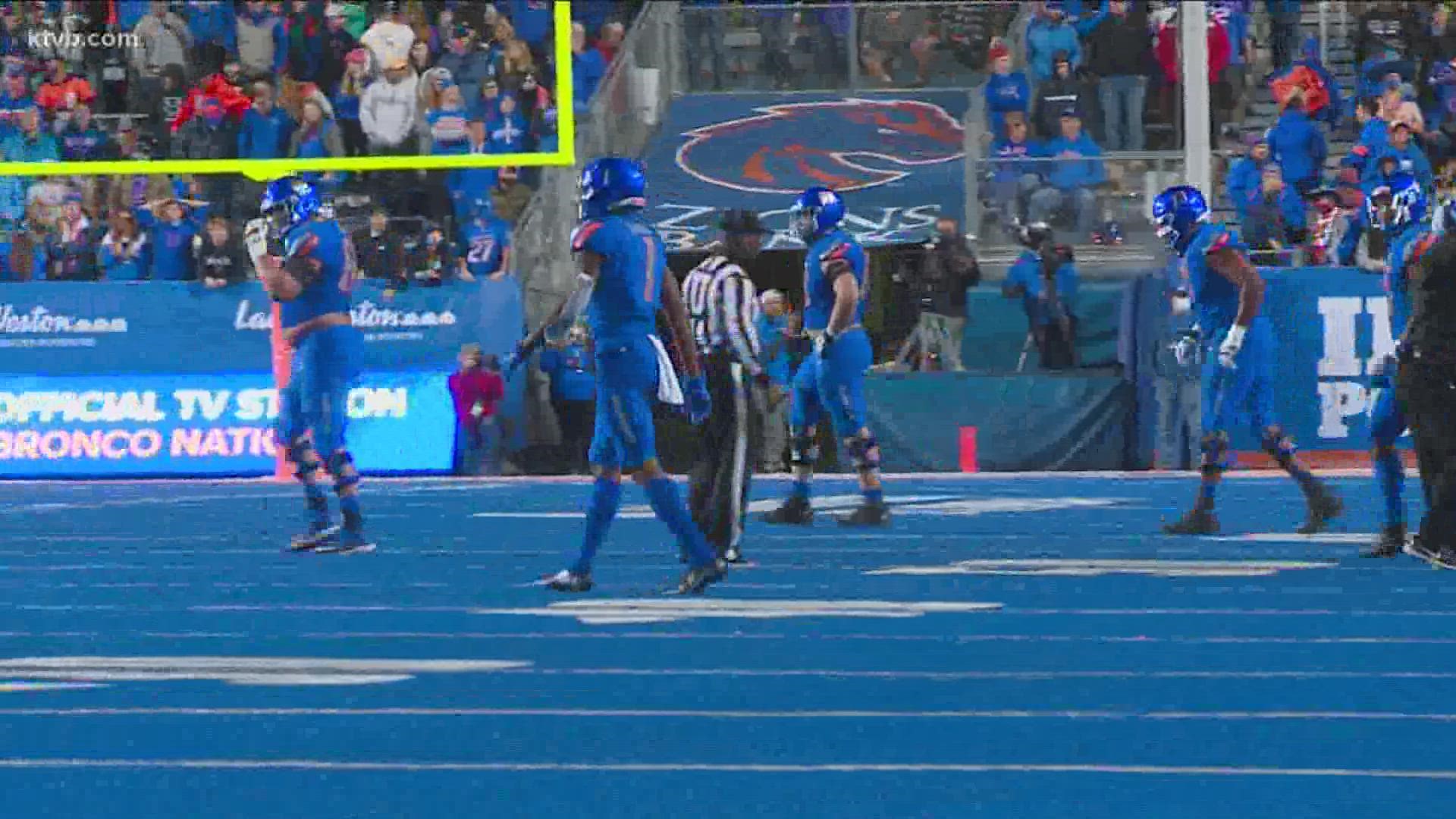 BOISE, Idaho — On Saturday night, the Boise State football team failed to defend The Blue at Albertsons Stadium against the Air Force Academy after the Broncos lost to the Falcons 17-24.

The Broncos (3-4, 1-2) entered the week seven conference matchup looking to capitalize on last week's upset win over BYU and to end their two-game losing streak at home. Now, their losing streak sits at three games, their longest in decades.

Much like the Broncos' three other losses this season, Boise State's offense struggled to do much in the second half. The Broncos were held off the scoreboard until 0:49 left in the game when Jonah Dalmas scored a 37-yard field goal to bring the score to 24-17.

Following Dalmas' late score, his 14th made field goal of the season, the Broncos successfully recovered an onside kick with 0:47 left in the game. With a glimmer of hope left with seconds left on the clock, junior quarterback Hank Bachmeier threw an interception against strong defensive coverage on the first play of the drive, killing any hopes of a comeback victory.

With their fourth loss on the 2021 season, Boise State has matched their worst season since 2015, when then-head coach Bryan Harsin and the Broncos went 9-4.

After the game, Andy Avalos said this isn't the standard of Boise State football, either at home or on the road.

"The standard is that our competitive nature and the way we play on the field is such that it gives us an opportunity to be successful," he said during the post-game press conference.

"A lot of it has to do with us and our operation and eliminating penalties, eliminating negative yardage plays, it's very difficult from the play from behind the chains and gets the other team off schedule. And we are consistently putting ourselves behind the chain so we've shown what we can do when we operate and stay on schedule and obviously when we don't do that, we fall into these lulls," Avalos said.

Another reoccurring theme from Boise State's fourth loss of the season was the lack of production from the offense's rushing attack. Both Cyrus Habibi-Likio and George Holani were out for Saturday's game, leaving senior running back Andrew Van Buren.

Van Buren had 58 yards and a touchdown on 15 carries. The entire Broncos' rushing attack combined for 78 yards on 25 carries.

Junior wide receiver Stefan Cobbs led the Broncos in receiving with six catches for 83 yards and a touchdown. After the game, he said football is a physical sport and they always make sure other players are ready to go.

"We want them to come back as fast as possible but always ready to, I always had faith and trust in the next person coming up," Cobbs said during the Broncos' post-game press conference.

Quarterback Hank Bachmeier completed 23 of his 36 pass attempts for 259 yards, a touchdown and an interception.

"Nobody likes losing, but you know we kind of just move on we grind, and we focus on the process of getting better and trying to keep going with the season," Cobbs said after the game.

Looking ahead of the Broncos' schedule, if Avalos and company can't right the ship during their upcoming bye week, Boise State could be flirting with their worst season this century. Heading into the second half of the season, Boise State's opponents are a combined 20-12, a 62.5% winning percentage.

In week 12 of the regular season, the New Mexico Lobos (2-5, 0-3) will travel to Boise on Nov. 20. In the final week of the season, the Broncos will travel to San Diego to take on the San Diego State Aztecs on Black Friday. The Aztecs are currently ranked 24th in the Associated Press Top 25 Poll and are 6-0 for the second time in the last 40 years.