Jake Ash, 31, was registered as an organ donor. On the day he donated his organs, his family started a movement of kindness using the hashtag #justforjake. 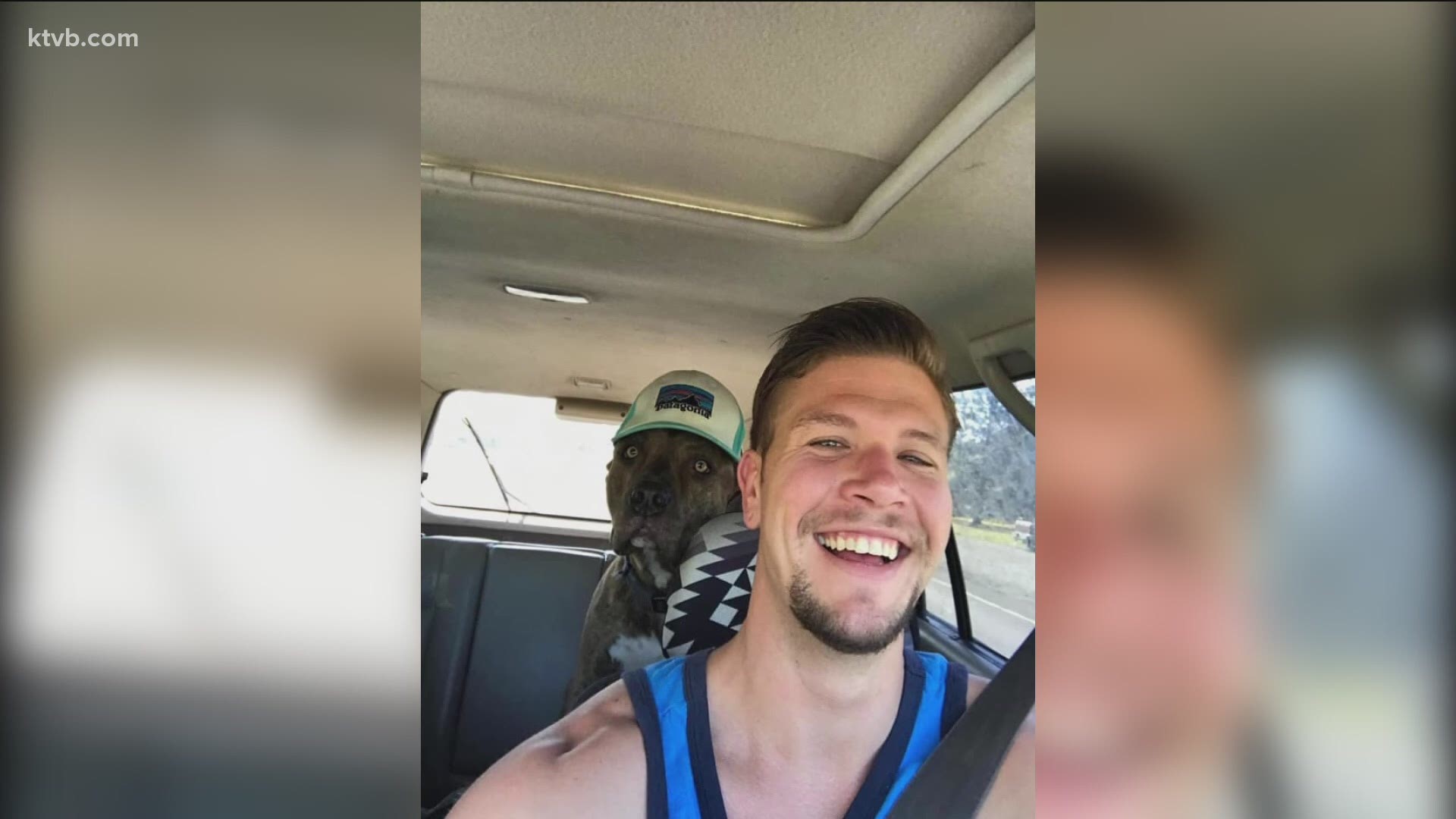 MOUNTAIN HOME, Idaho — You may have seen #JustforJake circulating on social media. That hashtag is in honor of Jake Ash, an Army veteran raised in Mountain Home, Idaho.

Ash tragically died in October 2020 at the age of 31. He choked on a piece of hard candy and unexpectedly passed away, leaving his parents devastated.

"Jake has always been my hero, he was my firstborn," said Danielle Hillman, Jake's mother. "He was strong for me, he was always my little man."

Jake's father David Ash said he was always so proud of his son's heart for others.

"Jake's kindness was his biggest trait," David Ash said. "Jake loved life, his family and friends, and whoever came into contact with Jake just immediately became his friend."

Jake Ash grew up in a proud military family with his father serving in the Air Force.

After high school, he joined the Army. He recently moved to Washington State to begin a new career. He loved the outdoors and was often out hiking and exploring with this beloved dog Axl.

"Axl is definitely like his son, and we called him our 'grand-dog'," Hillman said. "He was very spoiled and went everywhere with Jake."

Several weeks ago, his mom and dad got the call no parent ever wants to receive.

"Jake was at home waiting for his roommate to come home and they had a day planned," Hillman said. "Nolan actually came home after going to the gym and found Jake unresponsive. At the time, we didn't know what happened. Nobody knew what happened, he was just unconscious on his bedroom floor."

Jake Ash was rushed to the hospital, and his parents drove through the night to get there to be by his side. They were fortunate the hospital he was taken to allowed limited visitation from family, even during the pandemic.

"We were allowed to be with Jake," Hillman said tearfully. "They made arrangements for us and gave us leeway. We all saw him, we all spent time with him, we wore masks, we were allowed two at a time. As a mom, I can't tell you how much comfort that brought me. I could sit with him and be with him, hold his hand and touch his hair, and just stare at his face and memorize his face. We were really blessed to be able to be in there with him."

Sadly, his parents were told there was no sign of brain activity. He had gone too long without oxygen. Their son was gone.

Soon after, they discovered he was an organ donor. It was a lot to take in, but there was also some comfort in it.

#7sHero Tonight at 10 we honor a 31-year-old Army veteran from Mountain Home. Jake Ash lost his life in a tragic accident & was an organ donor. This is his “Honor Walk” in the hospital. The medical staff draped him in the American flag as a tribute to his service. 🇺🇸 #JustForJake pic.twitter.com/ZcBXaCT8lX

"When we found out Jake was willing to give his organs, that was just so Jake," David Ash said. "He was always willing to help out the next person or family."

"They gave us all the reports that every organ was perfect, he was so strong and so healthy," Hillman said. "What they found doing all those assessments was a piece of candy lodged in the back of his throat. They determined that he had choked and caused asphyxiation."

The day Jake Ash's organs were harvested, Hillman received a touching video of his "Honor Walk" from one of his nurses. The video shows him heading into surgery.

The medical team covered the veteran in an American Flag to honor him for his service. Hospital staff lined the halls with heads bowed in his honor. The family posted the video on social media to let family and friends know that Jake was donating his organs.

The family also made a special request of the hospital staff.

"Our request was just to think about Jake that day and to do a special deed for somebody," Hillman said. "Pay for the coffee behind you, pay for someone's meal, or just call somebody that you haven't talked to in a long time. Give someone a hug and say 'This is just for Jake.'"

The "Just for Jake" movement took off that day.

"On Facebook search the hashtag #justforjake. There are hundreds and hundreds of posts, from people we know and people we don't know," Hillman said. "They explained what they did in Jake's name and it just brings us so much comfort. Jake would be so happy and smiling and just love the fact that so many good deeds were done in his name."

The family later learned his heart, both kidneys, pancreas, liver, both corneas and much of his tissue were donated to people in need. The donation saved and impacted so many lives. His mom and dad say it's one of the things that keep them going right now.

"It is actually what brings us all the most comfort knowing that he is gone, instead of just being gone, he is gone but he lives on. And he has helped so many people." Hillman said. "Jake will forever be our hero."

For more information on organ donation and how you can register to become an organ donor, check out YES IDAHO.