Rezoning would give developer Creed Herbold permission to build a taller building, but he doesn't need to approval to demolish the existing building. 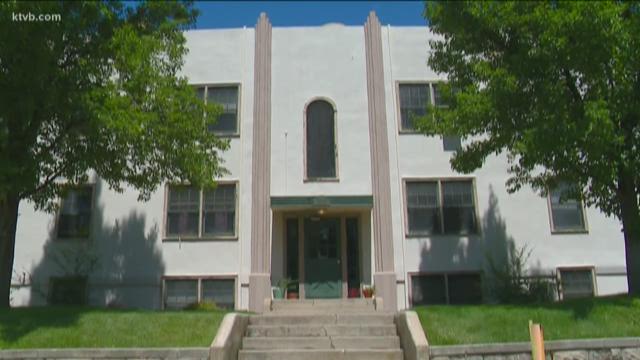 BOISE, Idaho — Boise City Council members on Tuesday night opted to defer until September a decision on whether to rezone a lot at the corner of Bannock and 17th Streets. That lot has been home to the Travis Apartments since 1937.

The rezoning would allow the owner and developer, Creed Herbold, to tear down the complex and build more expensive dwellings that can fit more tenants.

Tuesday night, the council opted to take more time to address concerns about the proposed building's height and setbacks from the sidewalk.

But whichever way the council eventually votes, the building's fate has essentially already been decided.

Herbold declined to be interviewed on camera but told KTVB he will demolish the building regardless of the city's decision.

There are 10 units inside the three-story Travis Apartments building, which is currently zoned as general-commercial.

Herbold wants to change the zoning status to residential-commercial, which would allow for a taller building. He envisions a brand-new five-story complex with 22 units.

Rezoning would give Herbold permission to build a taller building, but he doesn't need to approval to demolish the existing building, which he already has a permit for.

Lori Dicaire, of Boise Renters United, feels the Travis Apartments, built in 1937, are historic and tearing them down would set a precedent for other developers.

"I fear this is going to be the beginning of our second demolition epidemic, where developers will notice these buildings that are close to downtown, close within walking or biking distance, buy them up and demolition them to build a more lucrative product on them," Dicaire said. "To take a perfectly good, affordable, existing apartment building and rezone it so the developer can build a more lucrative product with more units doesn't seem to be in the public's best interest."

At a past rezoning hearing, people for the new apartment building told KTVB they support it because it would add more housing, even if it is more expensive.

The public was invited to weigh in at Tuesday's 6 p.m. City Council meeting when members take up the topic.