Five Idaho women who served honored on limited-edition medallion: 'They've been a huge benefit to this country'

Five women are memorialized on the Idaho Women Veterans Medallion. Each one played a different, but pivotal role in our nation's defense. 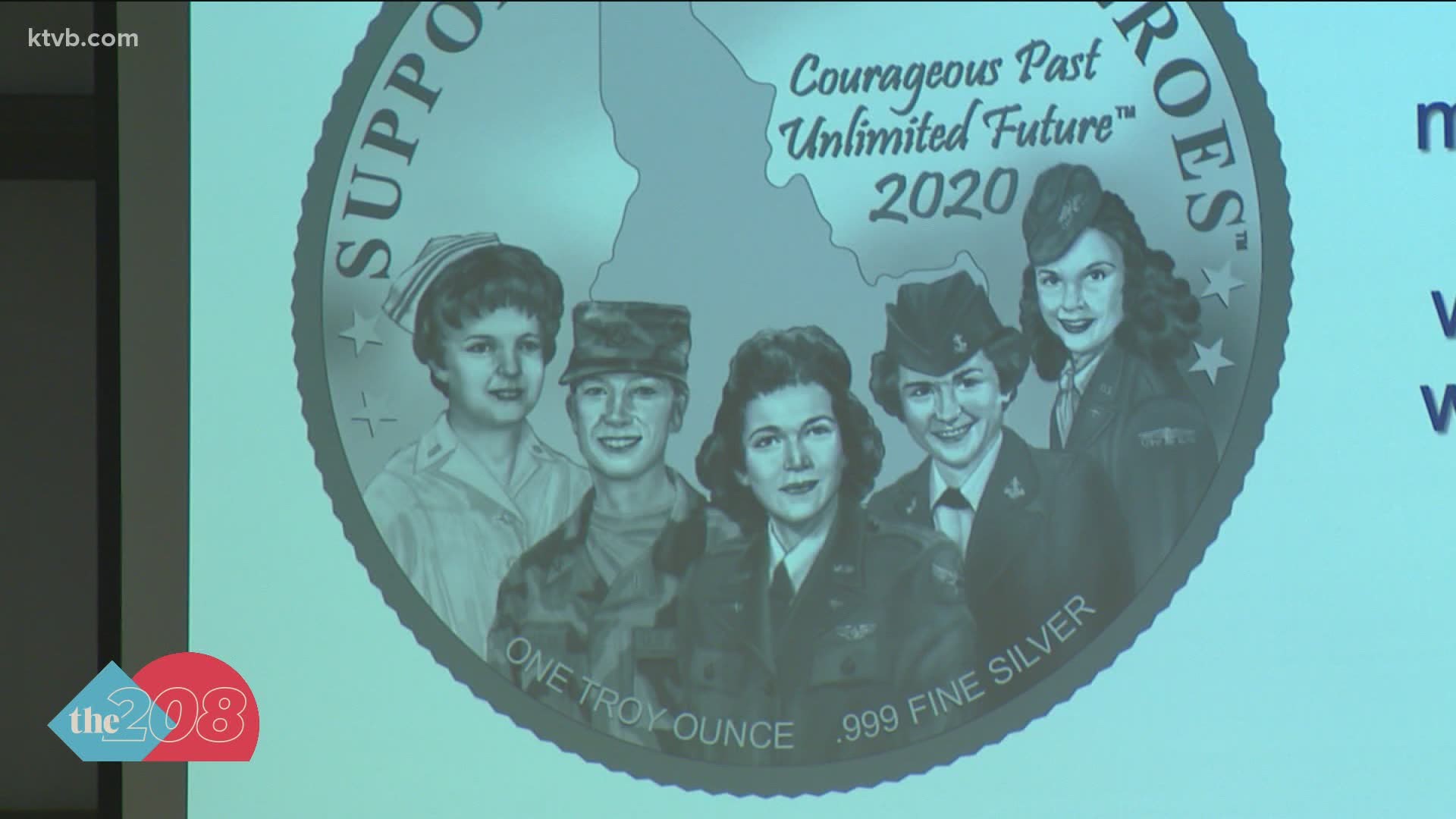 NAMPA, Idaho — Of the 124,000 veterans living in Idaho, about 10,000 are women. They are grandmothers, mothers, daughters and sisters.

This year, the state of Idaho is celebrating the legacy and service of all Idaho women veterans with a special silver medallion, featuring five women veterans who each played a different, but pivotal role in our nation's defense.

"[They] have really kind of been unrecognized because women veterans don't tout themselves," said Sue Paul, co-founder of the Warhawk Air Museum in Nampa. "They just do their duty. They're very proud of who they are. They're very close to each other overall. And they've been a huge benefit to this country."

Kay Gott Chaffey is one of the women featured on the medallion.

In 1942, she volunteered to be part of the Women's Air Service Pilots or WASPS. With all the boys leaving and going overseas, someone needed to take over on the home front. Chaffey was one of about a thousand women selected for the job.

She flew 17 types of military aircraft.

"Her favorite plane was the P-51 Mustang," Paul said. "She flew the Mustang. She flew the P-40. She flew the bombers. She flew everything, as all the WASPS did during World War II, and they ferried the airplanes from base to base. They actually taught men to fly on training bases."

Carmelita Pope also served in WWII as a USO officer during the last months of the war.

"She was extremely patriotic and came from an Italian neighborhood, pure Italian family and friends," Paul said. "And so she said 'I want to go to war.' And so she joined the USO and she went to Europe, primarily Italy. And they had a show that they traveled all over Italy performing in front of all of our servicemen."

Paul was part of the committee that selected the women. A ceremony unveiling the medallion was held at the museum in October.

Judith Eighmy, the only woman on the coin who still alive today, was there. A Vietnam war veteran, Eighmy was assigned to the US Navy Nurse Corps aboard the USS Repose where she cared for soldiers who were medevaced from the war zone.

"Taking care of the wounded was an honor in itself because we were volunteers," Eighmy told KTVB. "I feel more like a representative and a figure, a face on the coin. But I really believe it's not about me it's about representing other women who served."

Wanda Pollard is also on the medallion. She joined the Navy in 1953 at the age of 21 and was assigned as the hostess on the personal aircraft of the Commander in Chief, US Atlantic Fleet.

While serving, she met many high-ranking civilians, foreign dignitaries and service officials.

"Her entire family, I think there were 17 members of her family, that came to the ceremony," Paul said. "They were just so proud of her."

Carrie French served as an ammunition specialist with the Idaho National Guard's 116th Cavalry Brigade Combat Team. On June 5, 2005, while serving in Operation Iraqi Freedom, Carrie was killed when an improvised explosive device hit the front of her convoy vehicle.

She was the first woman from Idaho to be killed in combat. She was just 19 years old.

"It was a tragic, very difficult time for Idaho when this young woman was killed," Paul said.

French and the other four women featured on the medallion epitomize the words emblazoned on the coin: "Courageous Past, Unlimited Future."

Women veterans and their courageous past - so that we may all have an unlimited future.

"They're just uniquely, very wonderful women," Paul said. "Whether they're helicopter pilots or jet pilots or nurses, in any way that they serve, they love it."

The limited-edition medallion is part of a series of coins to honor Idaho service members. The medallion is available at the Warhawk Air Museum, the Idaho State Museum, the Capitol Gift Shop and at the State Treasurer's Office.

All proceeds go to the Idaho State Veterans Cemetery.