Aaron von Ehlinger's fellow lawmakers will determine whether he acted inappropriately, and can recommend sanctions including expulsion from the Legislature. 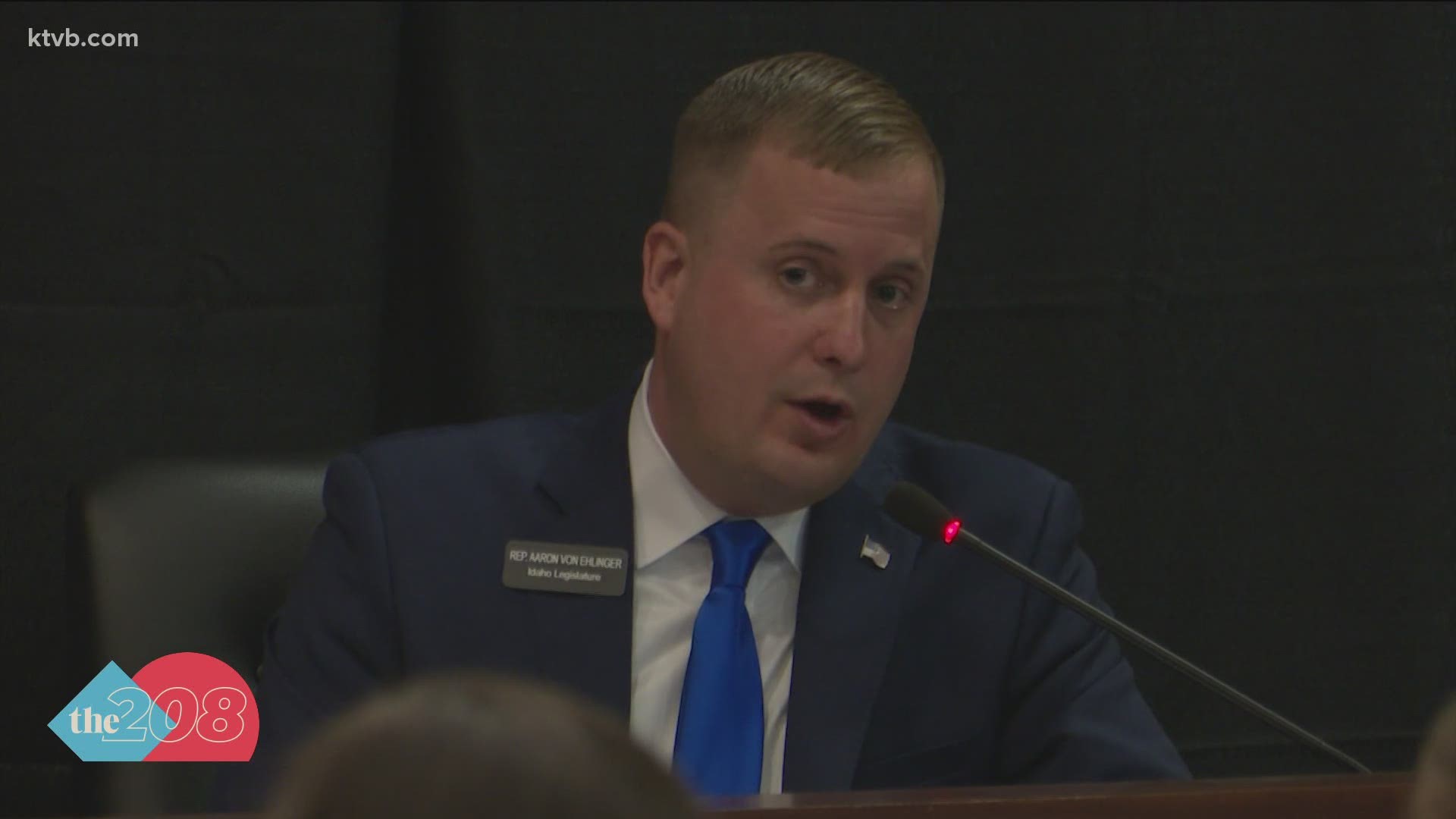 BOISE, Idaho — Note: This story contains descriptions of sexual assault that may not be suitable for all readers.

A 19-year-old intern at the Idaho Legislature testified during a Wednesday ethics hearing that Rep. Aaron von Ehlinger raped her in his apartment last month, despite her repeatedly telling him "no" and that she did not think they should have sex.

The woman, identified as Jane Doe, functions as a main witness in the hearing in which a committee of von Ehlinger's fellow lawmakers will determine whether he acted inappropriately and can recommend sanctions including expulsion from the Legislature.

A criminal investigation by Boise Police is also underway into the alleged rape, though no charges have been filed as of Wednesday.

Members of the ethics committee stressed repeatedly that the proceeding is separate from any criminal trial: At issue is not whether the encounter was consensual, legislators say, but whether von Ehlinger's actions towards Doe and other female employees at the Statehouse amount to "conduct unbecoming to a legislator."

In previous testimony, von Ehlinger (R-Lewiston) admitted to taking the House staffer out to dinner and having a sexual encounter with her, but argues the incident was consensual.

Doe testified that she met Von Ehlinger when he gave her some cookies and invited her back to his office. The lawmaker took to stopping by her office after that as many as ten times for personal conversations, she said, and at one point gave her his cell phone number.

"I was impressed by her story and her demeanor at the time, and I basically let her know that 'hey, if you ever need anything just let me know,'" von Ehlinger said.

Von Ehlinger said the two exchanged texts, and he ultimately asked the 19-year-old out on a date, picking her up at the Statehouse the evening of March 9 and taking her to a Boise restaurant.

After dinner, according to the police report, von Ehlinger offered to drive the woman back to her vehicle, but then said he needed to make a detour to pick up a handicap placard for his housemate's car. The lawmaker then drove Doe to his own apartment, opened her car door, and asked her to come inside with him, according to the report.

Once inside von Ehlinger's apartment, Doe told police, the legislator picked her up and carried her into his bedroom, putting her on the bed and forcefully kissing her. The 19-year-old said von Ehlinger began to touch her sexually and pull her clothes off.

Doe told the committee Wednesday that she told von Ehlinger no "multiple, multiple" times, even trying to convince him to stop by telling him she was not on birth control and had not shaved.

"He just continued," she said.

Doe said she reported the incident to the House Sergeant-at-Arms on March 11, and went to police that same day.

During the Wednesday hearing, von Ehlinger declined at his counsel's direction to answer questions about the sexual encounter or whether he and Doe went back to his apartment after dinner, invoking his right against self-incrimination.

Von Ehlinger's counsel, Edward Dindinger repeatedly noted that there were no laws or formal legislative rules that forbid sex or dating relationships between lawmakers and other adult employees at the Idaho Capitol.

The 38-year-old lawmaker also said that he did not believe it was inappropriate to pursue a 19-year-old intern.

"Her age had no bearing as far as me thinking it would O.K. to date anyone," he said.

Von Ehlinger went on to say he would not have a relationship with a House page - who are typically high schoolers - even if she was 18.

Von Ehlinger previously romantically pursued at least three other women who worked in the Capitol, according to testimony, including a lobbyist who confided in another representative that he had made her uncomfortable and she feared he had rifled through her purse for her home address.

Von Ehlinger also asked out a clerk in January - who rejected him in an email, telling him she was married - and took a Capitol security officer out on two dates before inviting her up to his apartment and having sex with her in early March.

The security employee testified Wednesday that she had willingly gone to von Ehlinger's apartment and that the sex had been consensual, although she felt "awkward" and "obligated" about it at the time.

Several representatives said they had warned von Ehlinger about dating within the Statehouse or exhibiting behavior that could be taken out of context.

Speaker of the House Scott Bedke testified that although no rules explicitly spell out that having sex with Statehouse staff is frowned upon, representatives understand that they are held to a high standard.

"I have been not bashful in explaining the relationship between elected officials and all of the staff in the building," he said. "It is not a big stretch to conclude that extra, that sexual relations from one that is at a higher power differential than one that is not, would be out of bounds as per normal protocols."

The committee recessed for the day shortly before 3 p.m. and is expected to reconvene at 10 a.m. Thursday to vote.