On Wednesday morning, a committee will hear testimony on the alleged rape by Rep. Aaron von Ehlinger. He faces the possibility of expulsion. 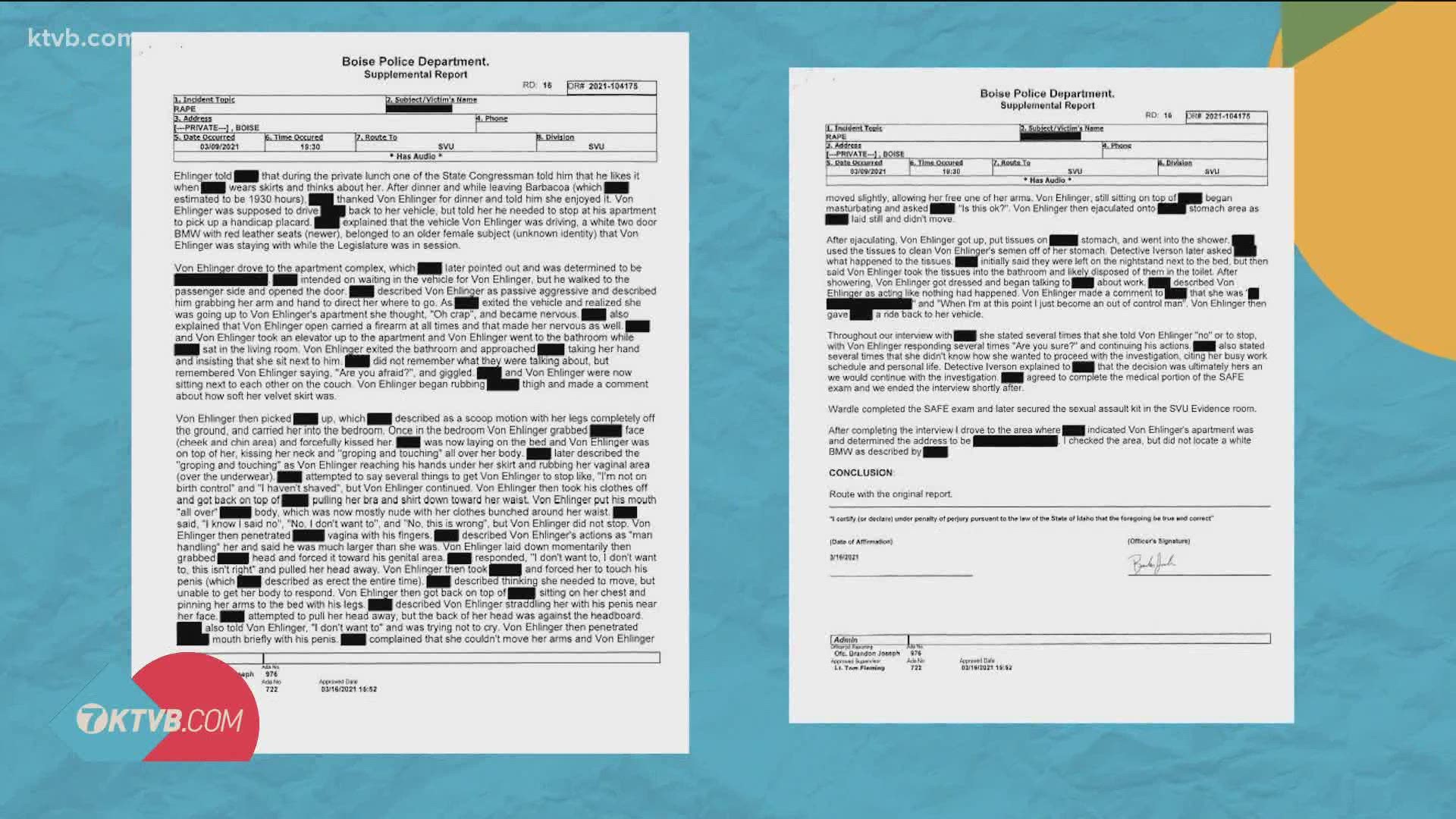 An ethics committee investigation is now underway at the Idaho Statehouse after Rep. Aaron von Ehlinger, R-Lewiston, was accused of raping a 19-year-old Statehouse staffer earlier this year.

On Wednesday morning, the House Ethics Committee will hear testimony on the situation to determine if the Lewiston lawmaker acted in a manner unbecoming a representative.

At the end of the process, lawmakers will vote on possible punishments, which range from reprimands to expulsion.

According to documents KTVB requested and received from the Idaho House Ethics and Policy Committee, a 19-year-old Statehouse staffer claimed that Rep. Aaron von Ehlinger orally raped her at his apartment after having dinner together in Boise back in March.

During testimony to the committee and through a police report to the Boise Police Department, the 19-year-old, who KTVB has chosen not to name, said von Ehlinger forced himself on her while she clearly said no.

In interview transcripts and police reports KTVB obtained through the House committee, von Ehlinger maintains that the events inside his apartment were consensual.

According to the Boise Police report, the 19-year-old said after the pair went to dinner, von Ehlinger stopped at his apartment while she thought he was driving her back to her car.

She said he opened the car door and claimed von Ehlinger grabbed her arm and hand to direct her where to go. According to the report and testimony, the victim said she wasn't expecting to go into his apartment but “just kind of” went along. The report went on to say that once inside, von Ehlinger soon "carried her into the bedroom" and "forcefully kissed her."

The teen described to the police that von Ehlinger was acting as if nothing happened.

The Boise Police investigator noted in his report that the victim stated several times that she told von Ehlinger "no" or to stop, with von Ehlinger responding several times, "Are you sure?" The victim said he stated, "When I'm at this point I just become an out-of-control man."

Von Ehlinger, again, said the sexual encounter was consensual. KTVB reached out to him for comment on this story and he did not respond.

Testimony from House Republicans familiar with the situation said von Ehlinger was warned during the session by leadership and another lawmaker about his interactions with women at the Statehouse after reports made to them by women, he made feel uncomfortable.

House Majority Caucus Chair Megan Blanksma told the committee that von Ehlinger was defensive about the warnings. She told the committee, "He made a comment about, well, you know, he was single, tall, blond, good-looking guy and, you know, sometimes people take things the wrong way."

On Wednesday morning, the House Ethics and Policy Committee is set to meet to hear testimony on the matter.

Annie Hightower, the director of law and policy for the Idaho Coalition Against Sexual and Domestic Violence, is representing the victim and shared new details earlier about expected testimony on Wednesday.

"We learned late last night that the committee will compel her testimony via a subpoena. She has consistently told the truth about what happened that night. We believe it should be her choice on whether or not to relive very traumatic events in a public forum,” Hightower said.

To be clear, the hearing Wednesday is not a criminal or civil trial about the alleged sexual assault but an open committee meeting to determine if a member engaged in “conduct unbecoming of a representative.”

The victim will be a witness to von Ehlinger's behavior.

In terms of an outcome at the hearing, the victim’s representation said, "He is here to represent the citizens of Idaho and I do not believe that is becoming conduct of an elected official. The House needs to do the right thing here."