KTVB wanted to grasp what it was like for pedestrians, cyclists and people with disabilities to traverse construction zones in Boise. In Part II of "Where the Sidewalk Ends" we asked a blind Boise woman to show us what it's like to navigate an area posing some problematic obstacles. 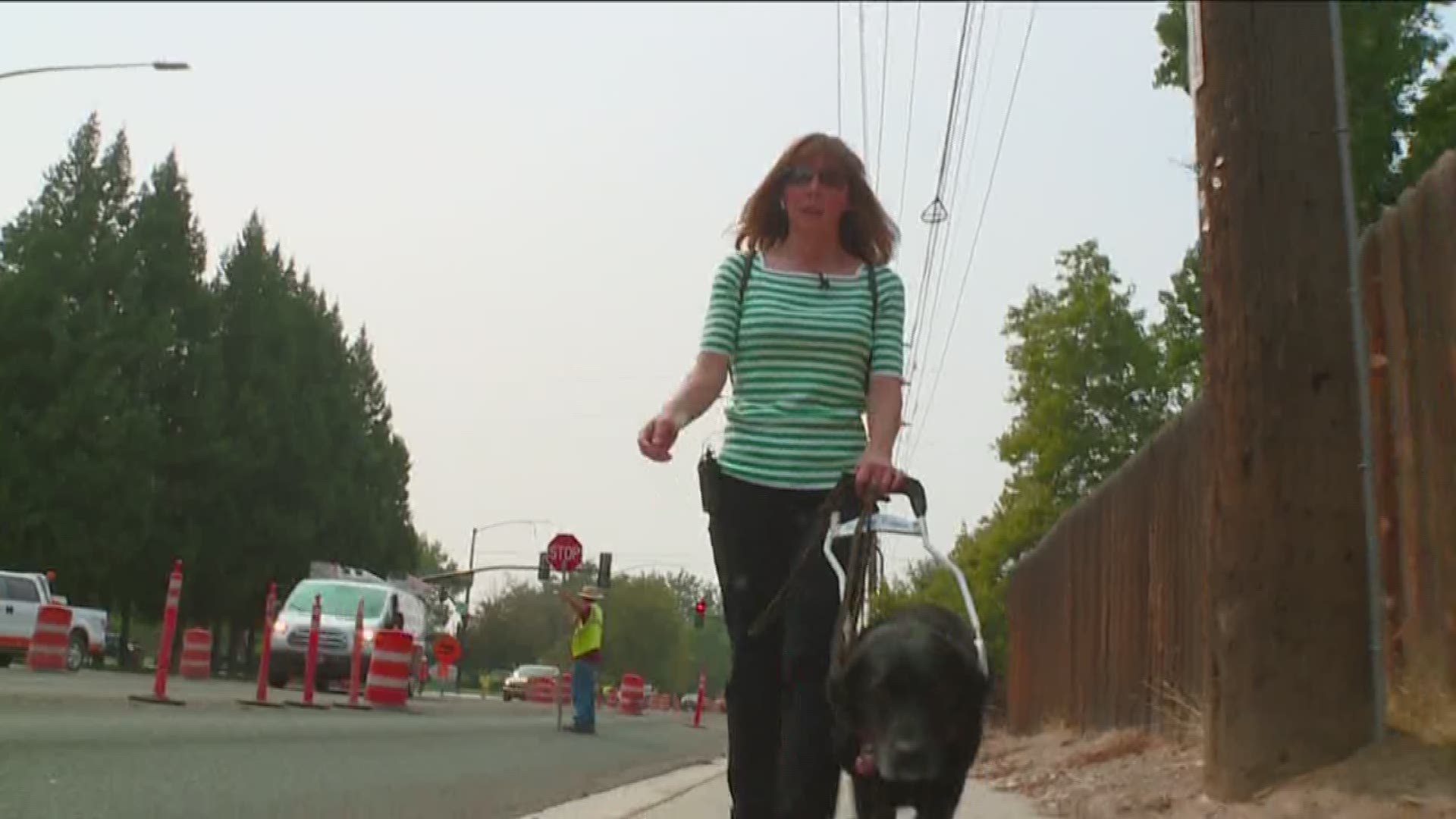 BOISE — In the second part of “Where the Sidewalk Ends," we are continuing to put a spotlight on hazards that pop up in construction zones around the area.

In Part I, we took you through the State Street and Veterans Memorial Parkway intersection. Now, we are taking a look at another project garnering backlash: the construction on Emerald Street and Americana Boulevard. The project's end goal is to improve bike lanes and sidewalks - but it's currently causing headaches for many bikers and walkers.

MORE: Where the Sidewalk Ends | Hazards for pedestrians, cyclists at one of Boise's busiest intersections

KTVB wanted to grasp what it was like for someone who is blind or has a disability to travel through some construction zones. So we asked Boise resident Dianna Willis to meet KTVB’s Morgan Boydston at Emerald and Roosevelt Street to show us what it was like to navigate the area.

“I was in my mid-20s when I really had to face facts and learn how to use a white cane and got my first guide dog,” Dianna Willis told KTVB.

Willis lost her sight completely about 15 years ago. She gets around with the help of her service pup Teegan, public transportation, and now her smart glasses.

She says she has to rely on the news to find out about construction projects around town, projects she feels are springing up everywhere. Willis says daily updates would be critical.

“The lack of information is a problem because with so much going on, it makes traveling that much more stressful to not know what you're going to end up running into,” she added. “Having information available that is not just generic, like well we'll be doing this work this day, but what does it really look like on the ground for a pedestrian or someone with a disability.”

Along with a lack of information, Willis feels barricades are inconsistent across different construction zones, creating unsafe routes.

“They really only help if they're a full barricade. For example, if a sidewalk is fully barricaded with either barrels or tape then I get that I should not go forward and my dog will stop. I'll need to go back the way I came and find another route. If there is a partial barricade - if there is a cone or maybe a sign - my dog may just get me around the sign,” Willis said. “It's very difficult to know where it's safe to go.”

That poses problems; she says a couple years ago as she was crossing a downtown Boise intersection, she ran into trouble. She says there were no indications she would be in trouble as she crossed and when she got to the other side, her service dog had to decide to lead her into wet concrete to dodge traffic.

Another problematic situation presented itself around Idaho and 4th and 5th streets a while ago; she says she ran into a construction zone and couldn’t figure out how to backtrack, so she had to call on nearby construction workers to assist her.

“Without my smart glass that would just be a random shot. Will my dog be able to interpret where it’s safe to go? Will we get out into traffic too far? And what will we come to on the other side: is it wet concrete, no sidewalk, is it a barricade?” Willis said. “My dog, she’s amazing at getting me around things, but she can’t read the sign!”

She met KTVB crews at the epicenter of Emerald construction; Teegan, her smart glasses and our crew by her side, we cautiously trekked through road work at Emerald and Roosevelt.

We ran into obstacles approaching the crosswalk, as well as other tricky hurdles that came up a couple times: metal signs on the sidewalk with their legs extending across.

"It should not be on the sidewalk. [Americans with Disabilities Act] is very clear: you have to maintain at least so many feet of pedestrian pathway on the sidewalk,” ACHD Capital Projects Construction Supervisor Justin Bledsoe told KTVB, “So that’s something we struggle with, whether it's someone that doesn’t know better or someone comes along and moves a sign, but we find that and we're constantly in battle of trying to keep pedestrian facilities open.”

The needs of pedestrians, cyclists, and people with disabilities have to be an "essential" part of road work, required under federal traffic standards and the ADA. Those standards say all users should be guided clearly when approaching and traversing construction zones. And when a pedestrian facility is shut down, detoured or disrupted temporary facilities have to be detectable and accessible.

“It just doesn't seem to be on their radar about safety for pedestrians and people with disabilities,” Willis said after navigating the Roosevelt and Emerald intersection.

“We do care very much and we do try. And we are always looking for new and better ways and different tools,” ACHD spokeswoman Nicole DuBois said.

“I know there was some challenges up there and it had to do with switching between phases,” Bledsoe added.

Because there wasn't a continuous sidewalk at Emerald Street and Americana Boulevard before construction, DuBois says they weren't required to put one in. So the highway district flagged neighbors with disabilities who take that route regularly and made accommodations for them amid the disarray.

They created a temporary asphalt area for one man who is in a manual wheelchair to protect him from entering traffic, because he was having trouble taking his normal route. DuBois says due to road work, signal removal, bus stop removal and trenching, ACHD is paying for a taxi service for a man who lives nearby who is sight impaired.

Construction has slid down Emerald and many accessibility issues tagged along.

“It could have been done a lot better in terms of how it's barricaded, how the information is given,” Willis added. “Thinking about someone in a wheelchair - can they even get through here?”

“We know it’s not always perfect but if we hear about something we go fix it. We have zone inspectors that are out checking these projects,” DuBois told KTVB.

“It’s frustrating because we’re so limited anyway in the valley on public transportation that then to add on safety concerns when we do actually need to walk - it just creates more of a barrier to life, to doing the things you need to do,” Willis added.

ACHD says if you see something you want to report, you can call them at 208-387-6100 during normal business hours or fill out this form online.