Where the Sidewalk Ends | Hazards for pedestrians, cyclists at one of Boise's busiest intersections

In Part I of "Where the Sidewalk Ends," KTVB's Morgan Boydston speaks with a cyclist who was hit in the State Street and Veterans Memorial Parkway construction zone, along with traffic experts and the Ada County Highway District. 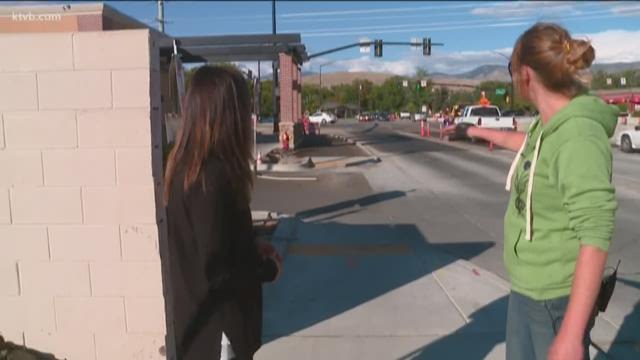 BOISE — Construction in one of the busiest Boise intersections is a hot topic this summer: the State Street and Veterans Memorial Parkway project started in February and is set to wrap up in the fall. But not without some gripes and grumbles.

In Part I of “Where the Sidewalk Ends,” KTVB’s Morgan Boydston spoke with a cyclist who was hit in the construction zone, along with traffic experts and the Ada County Highway District.

As you well know, construction projects are very fluid, but what’s remained consistent throughout is blocked-off portions of roads, streets filled with cones, barriers, dirt and heavy equipment - presenting some problems and perplexion for pedestrians and cyclists.

Bicyclist Casey O’Leary was heading down Veterans Memorial Parkway on her bike and was crossing the outlet right next to the drive-thru Starbucks.

“I was just coming back from the river and I live kind of just a few blocks that way so I was riding my bike down here. They've got this new set up with construction, so you have to cross over down there which is new and this whole sidewalk is new,” O’Leary explained as she stood in the construction zone.

“The driver was looking that way because he’s trying to see if he can come right. So by the time I realize I come around this wall and he's already in the intersection and I start screaming. And I almost was able to make it past him but he tagged me, then I fell, broke my thumb, had to get surgery.”

O’Leary says it was an injury caused by a wall obstructing her and the driver's view. After much of the wall was taken down to open up an area along VMP, there is a chunk of the wall still left, separating a small business park – where Starbucks stands – and a neighborhood.

“They had to literally cut this thing off right here and then they built sidewalk to go around it,” O’Leary said.

She also blames a lack of warning signs at the time she was hit.

“You have to have a giant sign to warn bicyclists to slow way down because you don't know who's going to come out of there,” O’Leary added.

Those aren't the only issues she's raising with the State Street and Veterans Memorial Parkway intersection project, which is set to improve pedestrian and bike facilities and traffic flow.

A nightmare she says she - and so many bike commuters - can't avoid if they need to get to the greenbelt.

Federal standards under the Manual on Uniform Traffic Control Devices for Streets and Highways (MUTCD) require clear guidance for all users through construction zones and reasonably safe access.

Don Kostelec, a transportation planning consultant and Idaho Walk Bike Alliance board member, says while quite a few signs are posted there should be more throughout and leading up to the construction zone. He says there are many good features on this project, but there's room for improvement to protect bicyclists, pedestrians and people with disabilities – and comply with the law.

Kostelec and O’Leary both say there could be safer, protected edges around pedestrian paths in some areas.

“If I'm a blind person crossing here I've got no edge treatment to tell me if that’s even where I’m supposed to go. So I could easily fall into that construction zone,” Kosetelec said of the northeast corner of the intersection project. “Ideally this would have been paved more to provide some edge treatment to get folks through there.”

Under MUTCD federal standards, edges and barriers should be detectable for people who are sight-impaired; Kostelec pointed out barriers in some areas of the huge, complex construction zone where he says they were not compliant ADA (Americans with Disabilities Act) or MUTCD.

“These barricades need to be covering the full tread width of the ramp,” Kostelec added.

When asked if they felt those barriers were enough, ACHD said in most situations: yes.

“The traffic cones or barrels would be standard practice,” Bledsoe added.

Kostelec points out a job well done along Veterans Memorial Parkway where ACHD put in a long concrete barrier along the pedestrian and cyclist pathway.

“They’ve made a really good effort here. And this to me is one of the two or three best components of this project, and that is this temporary pedestrian pathway that’s protected from the vehicles,” Kostelec said.

“If we are in an area that has continuous sidewalks - meaning no break in the sidewalk - then we have to provide an area with a continuous path for pedestrians,” ACHD spokeswoman Nicole DuBois said.

“It’s part of the ADA requirement of taking pedestrians into consideration during construction and maintaining those facilities,” Bledsoe added.

Under the same federal accessibility standards, Bledsoe says they always try to maintain a hard surface through construction sites so wheelchairs can make it through - whether that’s by laying down asphalt or compacting gravel.

Following requirements to a T while road work is in full force challenging, experts say, since construction equipment has to come in and out of those areas – presenting obstacles to getting these zones absolutely compliant. And the highway district admits their accommodations aren't always flawless.

“We're doing the best we can to try to maintain traffic flows and keep open to pedestrians,” Bledsoe told KTVB. “There's always room to improve. We're not perfect, the construction industry is not perfect. We're trying to do the best we can. We make mistakes, we try to address them as soon as we are notified or the inspector - a lot of times we're chasing construction right now.”

“We tend to get a lot of what’s called ‘windshield perspective’: We only see it through the lens of the car driving by and we don’t see these subtleties that can sometimes compromise the safety of vulnerable road users in these zones,” Kostelec added.

In Part II of “Where the Sidewalk Ends” airing Thursday, we will take you through another construction zone with a woman who's blind, and you’ll hear more from ACHD in response to frustrations raised.