Boise State football: That’s why they play the games

The Boise State Broncos had been through the ringer in the fickle court of public opinion. So they made practice last week their platform for improvement. 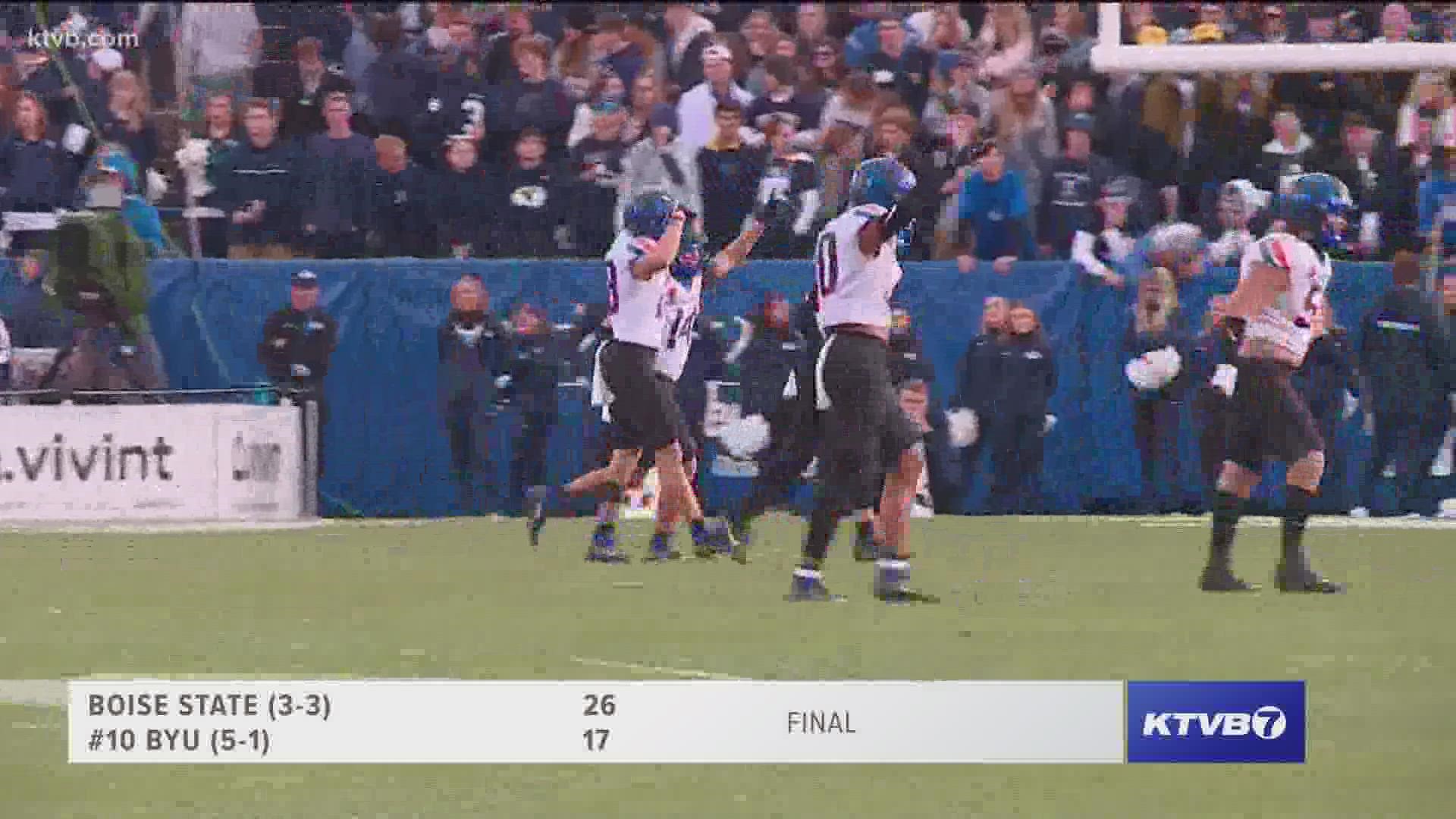 It was Boise State’s Andy Avalos being interviewed live on ABC by Tom Luginbill immediately following the game, not BYU’s Kilani Sitake. The Broncos’ season took a turn few expected with the 26-17 win in Provo Saturday. When we found out that Boise State’s two starting cornerbacks were out, that was a big enough red flag.

Then backup corner Damon Cole went down with an injury. Then the leader of the secondary, JL Skinner, was ejected for targeting in the second quarter. The next men up were Kaonohi Kaniho, Caleb Biggers and Alexander Teubner. The younger Kaniho made the game-sealing interception, and Teubner forced BYU’s second fumble and recovered the third.

On offense: no George Holani and no CT Thomas. But the result? A win that felt as good as the one at Fresno State in 2001.

THE START, AND THE RESPONSE

When BYU mounted its 10-0 lead in the first quarter, the Cougars had a total offense advantage of 136 yards to five. It didn’t look good. But what we didn’t know was that the Broncos hadn’t had a chance to work their game plan yet. It appeared their best opportunity for success in this game was to go to the air, but they went to the ground.

In Holani’s absence, Cyrus Habibi-Likio was playing his backside off, and Andrew Van Buren was one determined individual. Boise State fed its running backs 38 times, by far the most carries this season for that group. And the backs netted 140 yards, keeping the Cougars’ potent offense off the field.

No better example than the first 6½ minutes of the third quarter, when the Broncos ran eight times out of 12 plays and got the Jonah Dalmas field goal that gave them a 23-10 lead.

There was a key to the game, do you think? The four turnovers Boise State forced—the three BYU fumbles, at least—were indeed forced. If the Broncos were going to have a chance of upsetting the No. 10 team in the country, that’s what had to happen.

The back-to-back recoveries in the second quarter by Scott Matlock and Skinner (on balls knocked out by Isaiah Bagnah and Teubner) turned the game. Boise State has forced 16 turnovers (eight fumbles and eight interceptions) through six games, the most since 2016.

I don’t have to tell you where the Broncos were at the six-game mark last year. Yes, they had three.

There was always the feeling that BYU had more than an odds-on chance to come back and win the game in the second half Saturday—until Boise State’s Khalil Shakir made yet another highlight-reel grab of a 35-yard Bachmeier throw late in the fourth quarter. Shakir is making these kinds of catches on a weekly basis it seems.

For the game, he had five catches for 66 yards. Those are pedestrian numbers by Shakir’s standards. But he wasn’t going to be the focal point of the offense against the Cougars.

Shakir didn’t have his first catch of the day until just over six minutes remained in the first half. And he basically won the game anyway. Side note: Sitake is a classy guy. As disappointing as the loss was, Sitake sought out Shakir on the field after the game to congratulate him (following an extended hug with Avalos).

With all the woeful stats, and all the missing persons, and all the grumbling in town, the Boise State football team went into “prove it” mode during practice last week.

By the time the Broncos went to Provo, they had their “dirt dog” mentality back in the trenches—throughout the roster, really—and the toughness they displayed at BYU paid off. It’s something they can carry forward.

Bachmeier addressed the criticism the team has received more than once in his postgame press conference. That’s the bane of social media. The minority voices are the loudest, and their comments sometimes sting.

I’m convinced that the majority of Broncos fans understand that these are 18 to 23-year-old guys who work harder than almost anybody else their age at their craft. It’s easy to tell players to ignore social media. If only they could.

VANDALS HAD TO HAVE IT

Idaho almost didn’t survive after building a 35-7 lead over Portland State Saturday. But the important thing is, the Vandals got it done in a 42-35 win over the Vikings, and they’re still viable in the early stages of the Big Sky race at 1-1 in conference play.

Idaho scored touchdowns on five of its first six possessions in the Kibbie Dome homecoming contest, two of them from running back Aundre Carter, before Vikings quarterback Davis Alexander caught fire.

In the end, PSU racked up 588 yards of total offense and Alexander threw for 424 yards and four touchdowns before seeing the Vandals bat down a Hail Mary on the game’s final play.

HOW DOES IT RANK FOR ROB PHENECIE?

It could be the biggest win of the Rob Phenecie era at Idaho State. At least it rivals the upset of Nevada in Reno in 2017.

The previously winless Bengals beat a top 10 team for the first time since 2005 Saturday, shocking the No. 7 team in the FCS, UC Davis, 27-17 in Holt Arena. With Tyler Vander Waal injured, Hunter Hays made his first start at quarterback for ISU and threw for 281 yards and two touchdowns.

And Tanner Conner made five catches for 150 yards. Do the math: that’s exactly 30 yards per reception. Coach Dan Hawkins’ Aggies had been averaging 35 points per game but had only three points going into the fourth quarter.

CHIPS FALL IN THE YOTES’ FAVOR

College of Idaho has had its fill of heartbreaking endings this season, losing in that fashion to Rocky Mountain and Carroll College.

On Saturday, the Coyotes got payback in Butte, rallying from a 23-14 deficit with five minutes left to stun Montana Tech 28-23.

The Yotes first got out of a fourth-and-17 with help from a pass interference call to pull to within two points on a six-yard touchdown pass from Ryan Hibbs to Nick Calzaretta.

Then, Keegan McCoy scooped up an Orediggers fumble with two minutes left and raced 40 yards for the winning touchdown. Instead of 3-3, C of I is 4-2 and is very much in the hunt in the Frontier Conference.

Chip Beck, who just two weeks earlier was playing in the Albertsons Boise Open, ties Al Geiberger’s PGA Tour record by shooting a 59 in the third round of the Las Vegas Invitational.

Beck birdied 13 of the 18 holes in matching Geiberger’s feat at the 1977 Memphis Classic. Despite the record round, though, Beck would finish third in the 90-hole Las Vegas event.

There have been nine 59s since the most recent coming last year from PGA Tour rookie Scottie Scheffler at the Northern Trust.