There are two things that could divide locker rooms this season: NIL and vaccines. Boise State insists that neither will in the Broncos’ case. 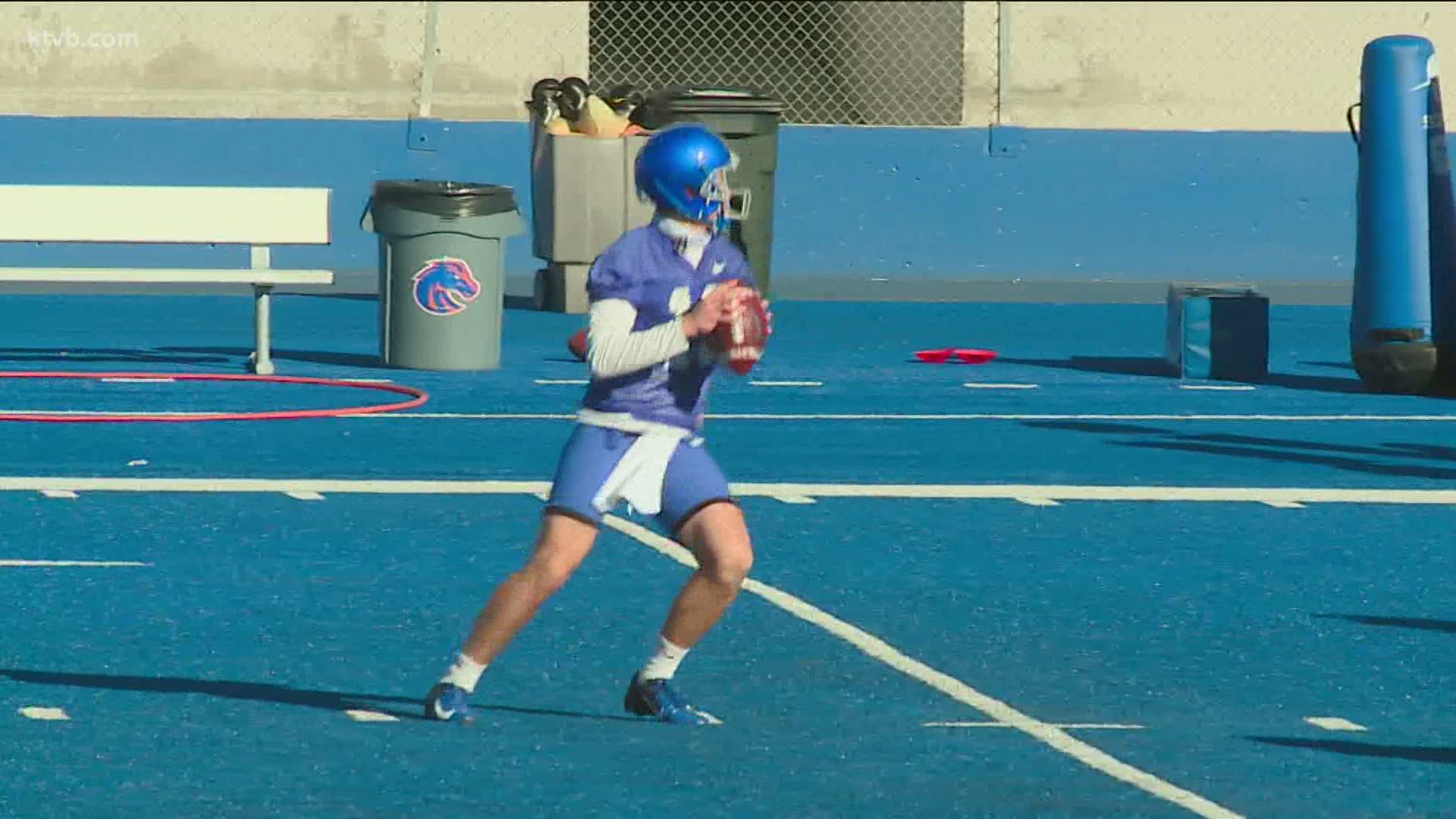 Today is all about takeaways from Mountain West Media Days as I have made my way back from Las Vegas. Conversations were dominated by the vaccination and the Name, Image and Likeness landscape. How will coaches hold chemistry together with some players being rewarded and others making nothing at all? NIL has already taken root. “The No. 1 goal always is that we put family first—and that’s Bleed Blue,” said Boise State coach Andy Avalos of preventing jealousy in the locker room. “It takes a great deal of maturity to understand that this is the way the world works.” San Diego State coach Brady Hoke threw out this scenario: “How about a guy who doesn’t play at all who is making a lot of money because he has 1.5 million likes?” When asked if he has a player like that, Hoke just grinned. It’s wild out there.

Commissioner Craig Thompson led off his press conference with this: “The biggest concern I have right now is complacency with the virus.” Thompson said seven of the 12 Mountain West teams have vaccination rates of at least 88 percent, but the conference’s overall average is 73 percent. Which means the other five teams are woefully behind. The theory at Media Days was that Boise State is among the five laggers, and B.J. Rains of the Idaho Press was able to confirm it.

For unvaxed athletes, COVID tests and contact tracing will be required. Avalos will not mandate vaccinations. But, he said, “When we don’t choose to be vaccinated, we have to live through protocols.” Wide receiver and captain Khalil Shakir, while fully vaccinated himself, said, “I’m not going to cuss a guy out for not getting vaccinated.” Those who think the Broncos could go 7-5 this year could have another way to get to those five losses unless the team’s rate rises dramatically. Thompson says there will be no postponements of games in 2021. If a team is unable to play, it will forfeit.

There was one answer that Avalos couldn’t provide in Las Vegas, to no one’s surprise. As in, when will Boise State decide between Hank Bachmeier and Jack Sears as its starting quarterback? “They will compete, and we’re excited to see it,” Avalos said. “(Especially) their leadership, and their ability to build confidence in those around them,” There’ll be a decision sometime before the UCF game on September 2, of course, In fact, Avalos said, “We should have a pretty good idea within the first 10 practices (of fall camp).”

As you know, Boise State was picked to win the Mountain Division, and Nevada was the choice to win the West in media voting. For Wolf Pack coach Jay Norvell, it’s the culmination of a process as he enters his fifth season. There was no quick fix after Brian Polian was fired, and the Nevada administration was going to be patient. “We made a very deliberate decision to build a foundation,” Norvell said. “That was our model.” Could Nevada be even better than expected? “We have seven transfer players who have never played a game for us,” noted Norvell. “We have a chance to be a much different team than we were in 2020. We’re excited.”

TRAP GAME? CONSIDER THIS ONE…

Don’t sleep on Boise State’s game at Fresno State, if only for these three reasons: Kirby Moore, Lee Marks and Tyson Maeva. The Broncos and Bulldogs haven’t played since the 2018 Mountain West championship game, and sometimes we forget about the ties that bind the two programs. I was reminded of that while talking to Fresno State coach Kaden DeBoer. Moore, the brother of Kellen and former Bronco, was promoted to passing game coordinator when DeBoer took the Bulldogs job a year and a half ago. Marks, former Boise State player and staffer, is DeBoer’s assistant head coach. “He’s my go-to guy for just about anything,” DeBoer said. And Maeva, dismissed by the Broncos at the end of 2018, is his starting middle linebacker. There’ll be some juice at Bulldog Stadium in November.

There is no more frustrated Mountain West coach than Craig Bohl of Wyoming. The Cowboys finished 2-4 last season, and Bohl says the issues went much deeper than losing starting quarterback Sean Chambers on the first series of the opener. “COVID made people individuals, and that’s just not who we are,” said Bohl. “We underachieved last year. We just did. It was a bad movie.” Bohl feels Wyo is ready to face 2021 head-on and wasn’t shy about saying that his team’s vaccination rate is “way over 80 percent.” To Bohl, it’s not a political issue. “I have members of my family who are anti-vax, and I get that,” he said. “I’m trying to win football games.”

Utah State went off the rails last season when coach Gary Andersen was fired three games into the season. The Aggies are poised to get back on track with the hire of Blake Anderson, who led Arkansas State to two Sun Belt championships and six straight bowl games after replacing Bryan Harsin with the Red Wolves. People outside the Cache Valley may not fully understand what this means for Anderson. He lost his wife to breast cancer almost two years ago and needed a change. “It was time for me to hit the reset button and get away from some of the memories,” said Anderson. He also felt he could keep winning at USU. Anderson remarried in March and feels eminently blessed. “We married on a Friday, and spring ball started on Monday.”

After almost 12 seasons as the face of the Seattle Mariners franchise, Ichiro Suzuki is traded to the New York Yankees at the age of 38. It happened as the Yankees were coming into Seattle to start a three-game series, and Ichiro suited up in pinstripes that night, one day after unknowingly wearing a Mariners uniform at Safeco Field for the final time. Ichiro, who joined the M’s in 2001 after nine years as a superstar in Japan, holds the major league record for hits in a season with 262 in 2004. He’s also the only big leaguer to record 200 hits in 10 consecutive seasons. Ichiro would finish his career back with Seattle in 2019.