Ironically, it came on a scramble and not a sack. But what many thought was inevitable came to pass. Hank Bachmeier got hurt Saturday night. 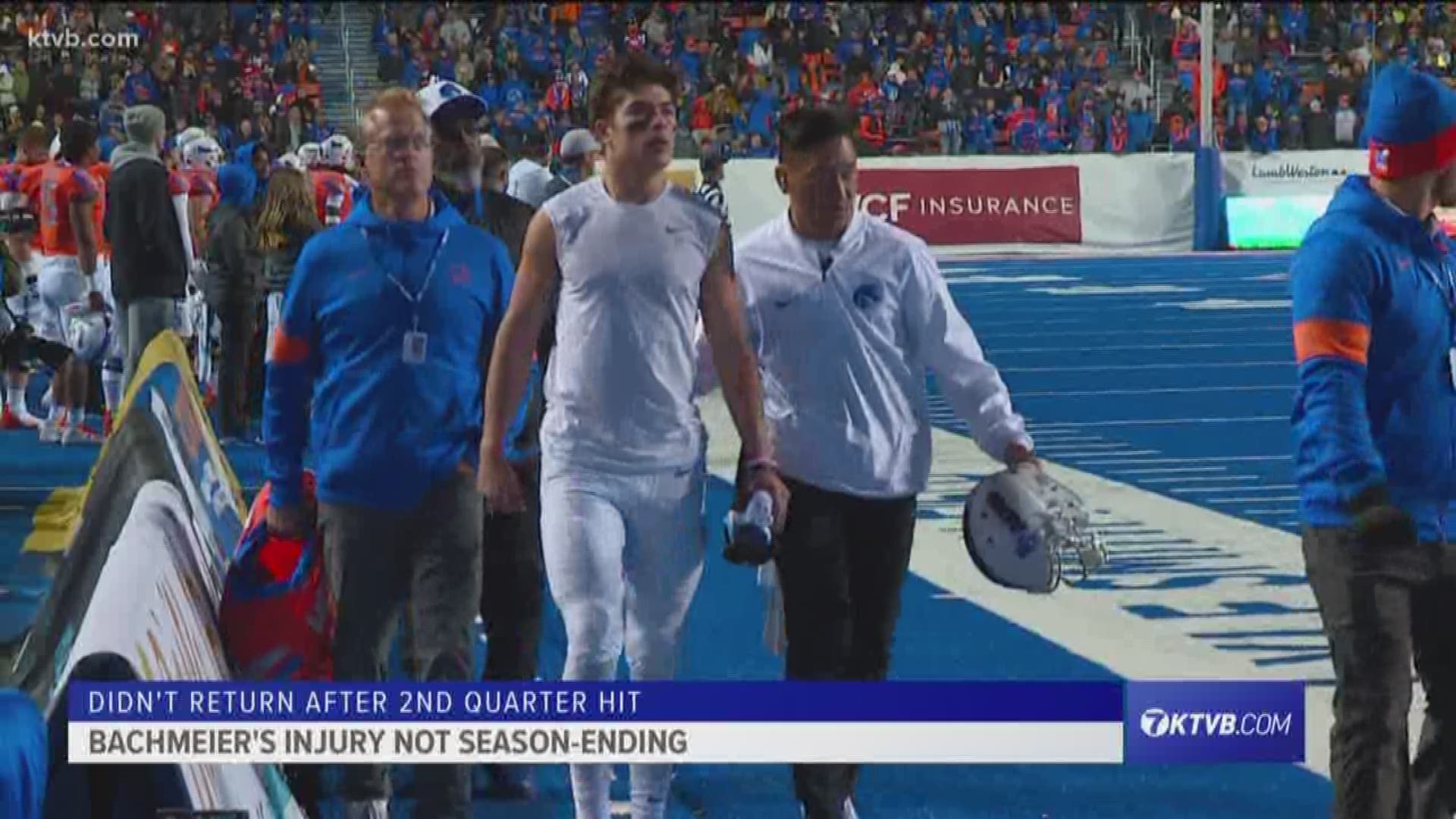 We found out a lot about the quarterback position in Boise State’s 59-37 win over Hawaii Saturday night.  One, that it is as fragile as we thought it was.  And, that the Broncos have a capable combo moving forward, whether Hank Bachmeier can play or not.

In order of appearance, Bachmeier was just 3-of-9 before leaving the game in the second quarter with what coach Bryan Harsin said might be a hip pointer, but he did cover 58 yards and had a beautiful TD strike to John Hightower.

Chase Cord threw his own dime into Hightower's hands, one of three touchdown passes he threw as he went 12-of-18 for 175 yards.  And Jaylon Henderson looked solid, going 6-of-10 for 82 yards and his first career TD.

Hank or no Hank at BYU this week, the team’s in good hands.

One thing that struck me Saturday night was Boise State opening the floodgates on offense.  As in, the Broncos gave Hawaii an awful lot to chew on.

Five different players took snaps from center in the first quarter alone (wildcatters Khalil Shakir and John Hightower in addition to the three quarterbacks).   There was a wildcat option featuring Hightower and Akilian Butler (called back on a forward lateral) and a wide receiver pass with Hightower on which he tucked and ran.

RELATED: Couple has a gender reveal party while tailgating at a Boise State football game

George Holani threw a personal kitchen sink at the Rainbow Warriors, scoring the first three touchdowns of his college career, two as a receiver and one as a rusher.

Holani’s the first Broncos running back to snag two TD passes in a game since the late Dan Paul against Nevada in 2009.

How fitting it was, considering the emotional pregame ceremony.

GAME BALL TO THE CROWD

The throng of 36,902 Saturday night, the biggest in Albertsons Stadium history and the first sellout since Coach Pete’s return with Washington in 2015, deserves a lot of credit in this one.

Stephen Tsai of the Honolulu Star-Advertiser blogged five minutes into the game, “This is the loudest crowd of UH’s three road games.”  And that includes one in front 67,000 fans at Husky Stadium.

Boise State thus moves into the lead in Mountain West attendance this season at 34,105 per game.  Fresno State is second at 32,912 per game.  The Broncos' average last year was 33,068, and that was with home games against BYU, San Diego State and the Bulldogs.

There are two home dates left in November against Wyoming and New Mexico.

OLD HAT TO HIS HAWAIIAN FRIENDS

Did somebody mention that Boise State’s Kekaula Kaniho is just a playmaker?  The junior nickel didn’t surprise anyone Saturday night who played high school football against him on the Islands.

After all, he finished his senior year at Kahuku with five pick-sixes.  And there Kaniho was on the blue turf, ripping the ball away from Hawaii wide receiver Cedric Bird II and recovering the fumble in the first quarter.

It was just an ordinary play—until Kaniho arrived.  That was one of three Broncos fumble recoveries that led to 21 points, no small factor in a 22-point win.

Add in Khafari Buffalo’s interception on the game’s final play, and Boise State now finds itself plus-two in turnover margin for the season.

BYU BACKED INTO A CORNER

Other games of note from the weekend.  BYU was already hurting with quarterback Zach Wilson out.  So the Cougars started the first black QB in school history, Jalen Hall, at South Florida Saturday.  But Hall was lifted in the fourth quarter due to concussion symptoms.  And all the while, BYU blew a 23-14 third-quarter lead and lost to the Bulls 27-23.

The Cougars are now 2-4 and are likely to start redshirt freshman Baylor Romney this week versus Boise State.

In the Mountain West, the two most eye-opening results were Fresno State’s 43-24 loss at Air Force, where the Bulldogs were outscored 21-3 in the second half, and UNLV’s 34-10 stunner at Vanderbilt, the conference’s ninth win over a Power 5 team this season.

All is well at College of Idaho, which has now won 11 games in a row dating back to last season.  The Coyotes showed Carroll College that there is indeed a new sheriff in town, as they rolled over the Fighting Saints 47-14 Saturday in Helena.

The Yotes amassed a season-high 575 yards of total offense, including 356 passing from Darius-James Peterson, who tied a school record with four touchdown passes.

Wide receiver Connor Richardson had a monster day, with nine catches for 147 yards and two TDs.  It was C of I’s third straight 40-point game, the first time the program has accomplished that since 1953.

Even with football’s 37-year hiatus on the Caldwell campus, that’s impressive.

A FORGETTABLE DAY IN HILLSBORO

All is not well at the University of Idaho, which is now 2-5 after suffering its first shutout in six years, 24-0 Saturday at Portland State.  The game was scoreless at halftime, but the Vikings inevitably heated up.

The Vandals tried both Mason Petrino and Colton Richardson at quarterback, and they combined to go just 13-of-29 for 156 yards and four interceptions.  Idaho mustered only 236 yards of total offense.

The defeat is the Vandals’ third straight since their seemingly energizing upset of Eastern Washington.  Now they have to face Idaho State this week in the Kibbie Dome.

SEASON-OPENING GEMS FOR THE STEELIES

The Everett Sheen era got out to a rousing start for the Idaho Steelheads over the weekend.  The Steelheads, putting up two first period goals each night, swept the Utah Grizzlies in West Valley City, winning 3-2 Friday and 3-1 Saturday.

Sheen went with Tomas Sholl between the pipes in both games.  Sholl stopped 69 of 72 Utah shots on the weekend.  And Brett Supinski scored a goal each night for the Steelies; those were the first two tallies of his pro career.

It’s baby steps for Graham DeLaet as he works his way back into a rhythm on the PGA Tour.  In his second tournament back, he collected his first paycheck in two years with a tie for 70th at the Houston Open.

DeLaet made the cut with a one-under 71 on Friday before ballooning to a 77 Saturday.  But he turned in a two-under 70 on Sunday that included just one bogey.

And the Boise State women’s soccer team has moved into sole possession of first place in the Mountain West after sweeping San Diego State and New Mexico over the weekend at the Boas Complex.

Goalie Sidney Smith recorded a shutout on Sunday against the Lobos—she has nine clean sheets in 15 games this season and has now tied a school record with 13 victories.

It wasn’t a record-setting inning per se, but it was historic in baseball lore.  The Chicago Cubs, leading 3-0 and cruising toward their first World Series in 58 years, were five outs away in Game 6 of the National League Championship Series against Florida.  Minutes later, Wrigley Field fan Steve Bartman had knocked a foul ball away from being out number two, a big error had been added at shortstop, and the Marlins had scored eight runs to stun the Cubs.  They couldn’t recover in Game 7, and their legions of followers didn’t get over it until the magic of 2016.