'We all knew that flag was coming with us': Deputies save American flag from Riverside Fire

Doorbell video shows deputies lowering the flag at an Estacada RV park, as flames moved in. 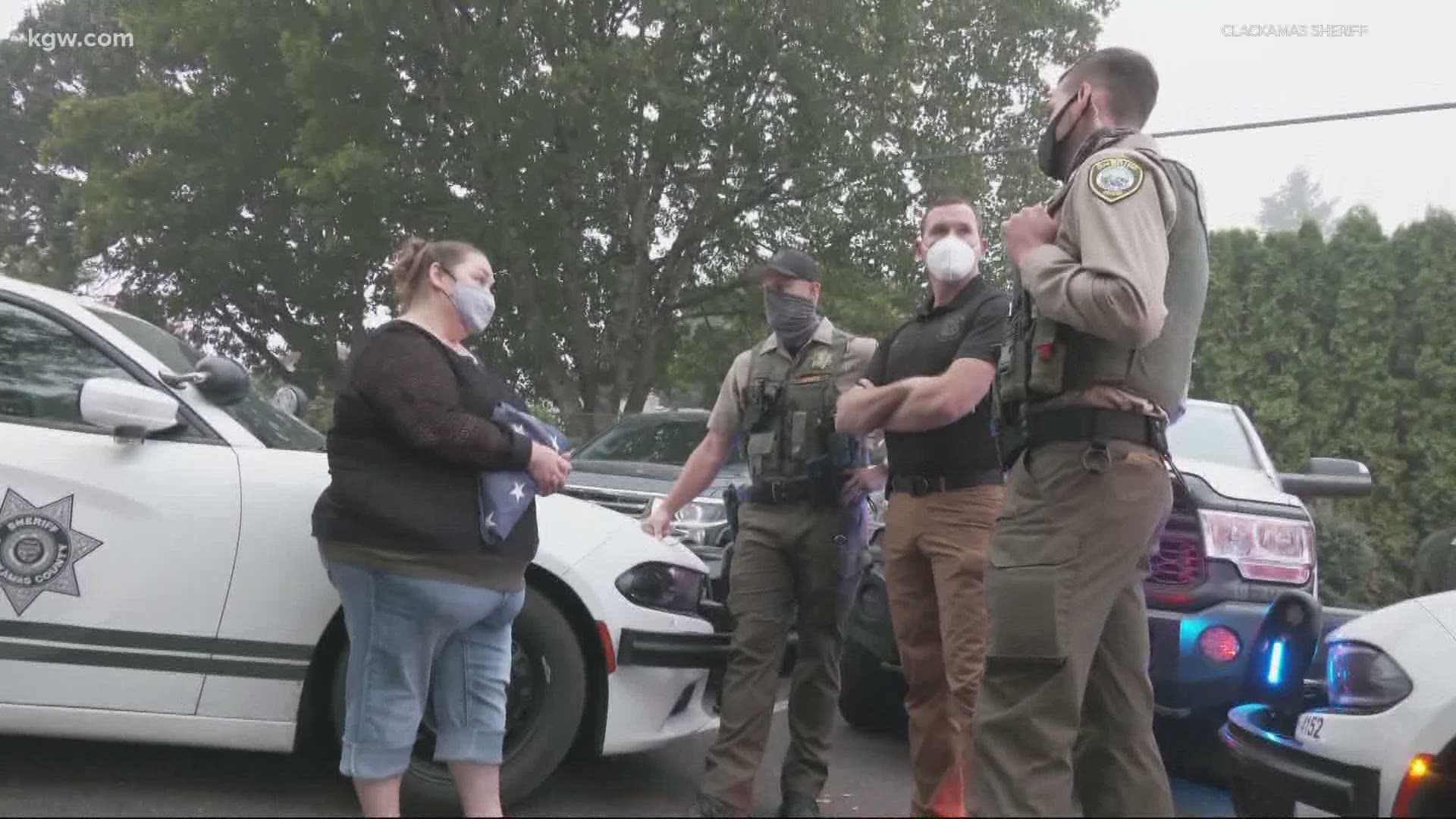 ESTACADA, Ore. — Hundreds of families are still recovering from the Oregon wildfires, including those whose homes burned in an Estacada trailer park. Though Clackamas County Sheriff's Deputies couldn't save those homes, they wanted to spare something in the park—an American flag.

On Sept. 9, as the Riverside Fire raged, deputies drove through the evacuation zone to make sure everyone had made it out safely. For Deputy Hayden Sanders, it was personal.

“I live in the area, I was at level 3 [evacuation notice],” said Sanders. “So I kissed my wife goodbye, we packed up the horses, she left and I went to work and I didn't see her for about a week.”

Around 9:30 p.m. that night, Sanders, his brother, Deputy Evan Sanders, and Deputy Andy Kiesel pulled into the Clackamas River RV Park in Estacada.

"As I entered the park, I noticed this big, beautiful American flag flying,” said Sanders.

Park manager Valerie Gourneau had hung the flag and lit it, so it could fly day and night.

“Pride in the country,” said Gourneau, describing what the flag meant to her. “The freedom that we've been given.”

As the flames moved quickly toward them, the deputies checked the RV park to make sure everyone had made it out.

“We were turning to leave and I realized we can't save these people's trailers," said Sanders. "But the one thing we can do is try to save this flag.”

At that very moment, Gourneau just happened to check her Ring doorbell camera feed and watched as the deputies approached the flag pole.

“Nothing had to be said between us,” said Sanders. “We all knew that flag was coming with us.”

The deputies were unable to untie the knotted rope, so they used a knife to free the flag.

“We cut it, it fell, but luckily Deputy Keistal was there and caught it!” said Sanders. “So we scooped it up, I got in my truck, they got in their patrol car and we got out of there as quick as possible.”

“They're awesome!” she said. "Instead of doing a quick check and leaving, they took the time, put their lives on the line—like they do every day—but yet again to take the time to take the flag… you couldn't thank them enough.”

A week later, Gourneau thanked the deputies in person when they returned the flag to her. The night they saved the flag, seven trailers in the RV park burned, and smoke destroyed several others. Scorched trees now stand behind the empty flag pole, but not for long. Soon the flag will rise again on a new rope, along with hope. For the deputies, that was worth saving.

“I would just encourage people to keep your heads up, help each other out,” said Sanders. “We're going to come out of this on the other side, better for it.”