Is a constitutional amendment in Idaho's future after ruling impacted domestic violence cases?

That conversation is in reaction to a decision from the Idaho Supreme Court that effectively made it harder for police to make arrests for domestic violence.

BOISE, Idaho — Some of Idaho’s legislative players have begun talking about whether to ask voters to consider a possible amendment to the state constitution, following a recent court decision affecting misdemeanor domestic violence arrests.

That conversation — described as “rumblings” by a lawmaker and a domestic violence victim advocate — is in reaction to a June decision from the Idaho Supreme Court that effectively made it harder for police officers to make arrests for misdemeanor domestic violence if the officers themselves did not witness the crime, according to the Idaho Press.

While that decision might be seen as a win for individual due-process rights, many police officers, advocates and prosecutors felt the court’s decision made it more difficult to help victims of domestic violence, according to Lisa Growette Bostaph and others.

Bostaph, a Boise State University criminal justice professor, has been surveying police across the state about the effects of the decision as part of a new Biennial Report on Victimization and Victim Services, funded by the Idaho Council on Domestic Violence and Victim Assistance.

“There’s a lot of frustration and a lot of concern for victims,” Bostaph said. “And their concern is, ‘How long is it going to take before we respond to one of these and we can’t do what we need to do, and somebody’s going to end up dead?’”

Both state Rep. Melissa Wintrow, D-Boise, and Annie Hightower, the director of law and policy for the Idaho Coalition Against Sexual and Domestic Violence, said they’ve heard “rumblings” about a possible amendment to the Idaho Constitution. The theoretical amendment would legally allow officers to make warrantless arrests in misdemeanor cases once again — but neither said they’d heard much more than that.

Before the ruling in June, police officers could make arrests for misdemeanor domestic violence without a warrant previously in place, based on their own personal observations of a scene and what victims told them. The court ruling requires a warrant already be in place when an officer makes an arrest for a misdemeanor.

“What I’ve heard is that there is a proposed constitutional amendment, which would be the one way to fix this, potentially — one of the options … besides just creating more community-based solutions,” said Hightower, who acknowledged she’d heard very little. “I haven’t seen the amendment, so I don’t know what the language looks like, and I believe it’s coming out of the (attorney general’s office).”

The Idaho Office of the Attorney General declined to comment at this time. However, in July the office asked the Idaho Supreme Court for a rehearing in the case tied to the Supreme Court decision, known as State v. Clarke. That request was denied in August.

The landmark Idaho Supreme Court decision stemmed from a 2016 case out of Kootenai County that involved a man named Peter O’Donald Clarke.

According to court documents, a woman reported to a Kootenai County Sheriff’s deputy that Clarke had grabbed her without her consent. Clarke later admitted to grabbing her, but said he thought the action was consensual. Those two pieces of information formed probable cause for Clarke’s arrest, and the deputy took him into custody on suspicion of battery.

Battery is one of a handful of crimes for which police in Idaho were, at the time, allowed to make a warrantless arrest — meaning, even if the officer didn’t see the crime occur, the officer could still make the arrest if they could establish probable cause.

In 1979, the Idaho Legislature outlined those crimes in which warrantless arrest is allowed. They included assault, battery, domestic violence, first- and second-degree stalking, violation of a protection or no-contact order, and threatening violence against a school using a firearm or other weapon.

But Clarke appealed his case to the Idaho Supreme Court, and thus justices had to consider Article I, Section 17 of the Idaho Constitution. That passage doesn’t prohibit warrantless arrests, but it doesn’t encourage them either.

Justices themselves appeared, in the decision, to appreciate the weight the decision would have in domestic violence cases.

They then quoted Idaho law as saying, “Domestic violence is a serious crime that causes substantial damage to victims and children, as well as to the community,” but went on to write the laws allowing police officers to make warrantless arrests in domestic violence situations “must yield to the requirements of the Idaho Constitution.”

Officers are given a great deal of latitude to decide if domestic violence qualifies as a felony or misdemeanor. A felony requires physical “traumatic injury,” but, citing case law, she said many times “any mark on the body can count as traumatic injury.”

Thus, when officers lost the option in June to arrest people for misdemeanor domestic violence without seeing the crime occur, Hightower said she believes that, in some jurisdictions, they simply started making more arrests for felony domestic violence instead.

“Which is problematic if you’re just doing it across the board,” she said. “It erodes trust in the criminal justice system and is not necessarily the right move to make.”

Other jurisdictions simply chose not to make arrests for misdemeanor domestic violence — which was also a problem.

The third response — adopted by the 4th Judicial District, which includes Ada County — involves police obtaining an arrest warrant on the scene by calling a prosecutor and obtaining the warrant from a judge.

It’s possible — police in Ada County, at least, have been using the model to make arrests for misdemeanor domestic violence — but it takes time, and it requires more officers to secure a scene for a longer period of time while a judge issues the warrant. That’s a problem for rural jurisdictions with fewer officers, Hightower said.

The only other way an officer can now make a misdemeanor domestic violence arrest if they didn’t witness the crime themselves is if the victim agrees to a citizen’s arrest — meaning the victim must sign a form swearing the crime occurred.

While Meridian Deputy Police Chief Tracy Basterrechea said his department’s officers have encountered some victims who are willing to sign the form, police in general have worried about a victim’s willingness to come forward.

ARE ARRESTS ALWAYS THE BEST OPTION?

Since the early 1980s, arrests have become the ubiquitous response for police dealing with a domestic violence situation that officers have concerns about.

”Without the opportunity for officers to arrest at that scene when something violent has happened, in order to ensure the safety of victims and children — what else do they do at 2 a.m. in the morning on a weekend?” she said.

Of the eight suspected intimate-partner domestic violence homicides the Treasure Valley has seen since January 2018, only one — the killing of 56-year-old Darla Fletcher — involved a suspect with lengthy criminal history: her ex-boyfriend, David Randall, 56, who had been charged with six misdemeanors dating back to 1997 but didn’t have any prior felonies.

RELATED: Boise community holds vigil and remembers woman who prosecutors say was killed by her ex-boyfriend 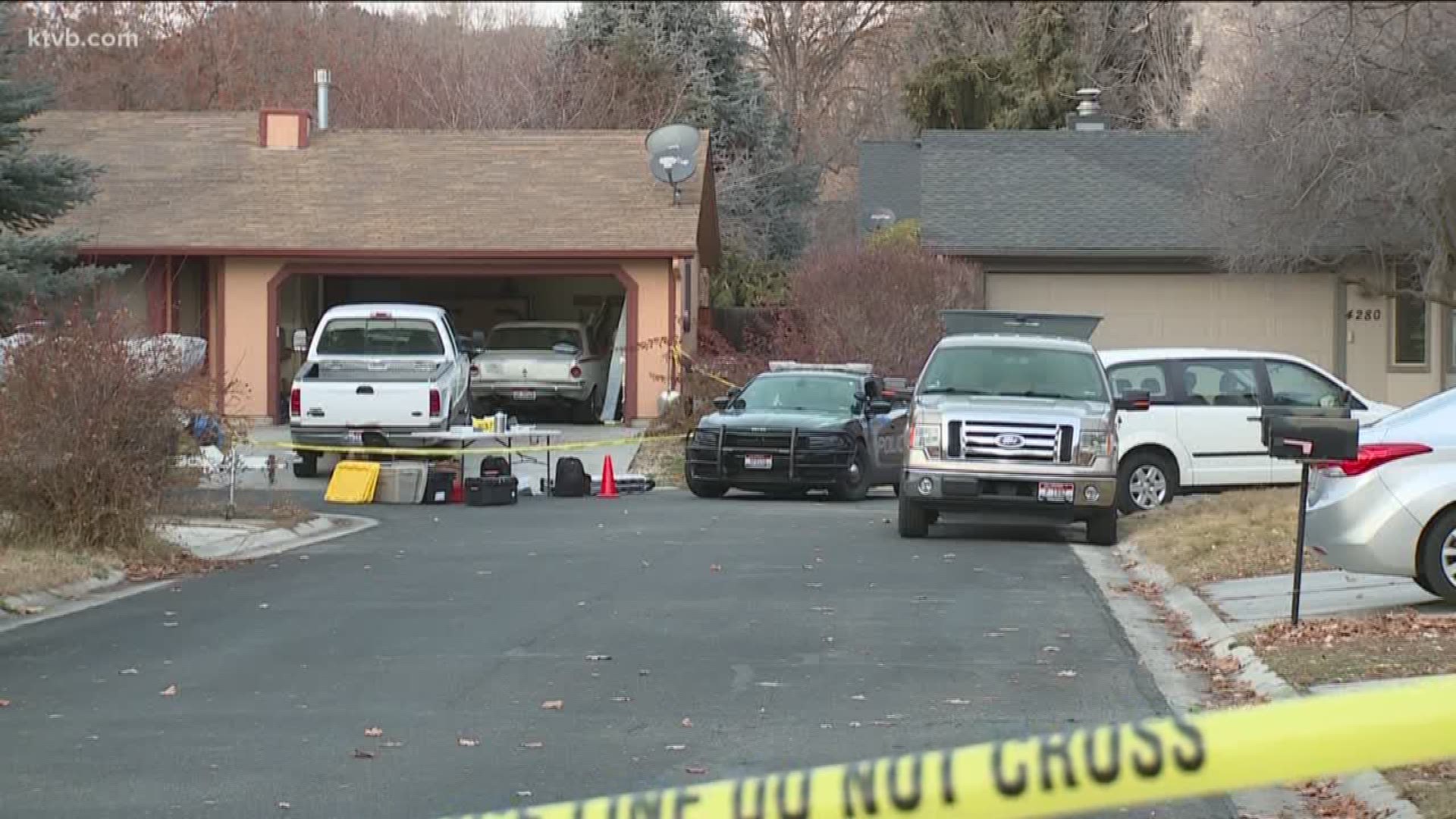 No one was prosecuted in seven of the cases because the perpetrators killed themselves after killing their victims. Randall’s case has not yet gone to trial. The one-year anniversary of one of those, the case of Heidi De Leon, 40, who was killed, along with her husband, Jose “Joe” De Leon, 47, by her ex-husband, Edward Epps, Jr., 39, passed on Monday.

A ninth case involved Carlos Sandoval, 24, who has since pleaded guilty in connection with the shooting death of his stepfather, Andrew “Andy” Jones. Court records show Sandoval had been charged with a misdemeanor in 2016 and had a lengthy juvenile criminal history dating back to 2009.

“That’s why, when officers actually get called — we know that’s about 50% of the time in domestic violence cases, maybe 49% nationwide now — that when they do get called, it’s an opportunity to identify whether those risk-level behaviors are occurring,” Bostaph said.

It’s also why the Idaho Supreme Court’s decision in June shocked her so much — it reversed decades of established police practice, backed by research.

”If we’re talking about evidence-based policy making, arrest does have research behind it demonstrating that it significantly reduces the likelihood of future violence,” she said. “We have data and scientific studies that back it.

“Absolutely what the research has shown is that only accountability and monitoring has been shown to change an abuser’s behavior,” Goldstein said by phone on Friday.

Domestic violence and sexual assault are, by definition, often committed in private — they’re not likely to include a witness, let alone a police witness, he added. Abusers expect to get away with their crimes — and they very often do, he said.

Rep. Wintrow is not fully convinced arrests always lead to the best outcome for people involved in domestic violence situations.

Not everyone was upset about the Supreme Court’s decision either, said Wintrow. Some lawmakers likely saw the outcome as a positive one for individual rights in criminal cases.

“I think the colleagues that are probably supportive of the decision of the court is because they’re seeing generally due process issues for defendants,” she said. “And it goes beyond domestic violence. … And so I think they’re kind of thinking broadly. The folks I’m talking to are thinking specifically about issues with domestic violence, and (arrest is) a way that we’ve been dealing with issues.”

Hightower said the effects of the decision might not even be as sweeping as some first feared they might be, given the fact that some communities generally try to avoid any police contact in the first place, such as those including large numbers of undocumented people.

“I think that even the impact on domestic violence is unclear because I’ll tell you some communities are telling us, ‘This doesn’t have any impact on us at all because we would never call law enforcement,’” Hightower said.

In addition to that, Hightower said victims aren’t always happy with an arrest either — she cited a survey conducted by the National Domestic Violence Hotline, which asked victims about their satisfaction with law enforcement’s response.

Her organization has obtained similar results when conducting Idaho-specific surveys, she said.

The process of amending the state constitution is not to be taken lightly, Hightower indicated.

“And I think that there will be concern about a constitutional amendment because once you amend the constitution it’s very hard to fix if there are problems with it,” she said. “And then concerns about government overreach I think would also be potentially valid concerns depending on what the language states.”

Regardless of whether the constitution is amended in light of the Idaho Supreme Court’s decision, both Bostaph and Wintrow said they’re looking for unintended positive outcomes of the court’s decision. In her interviews with police departments, Bostaph said she’s asking officers if they’ve seen any of those outcomes — possibly new community-based services, or more training for officers.

“There could be some positive outcomes from this that have nothing to do with the actual act of arresting someone,” she said.

Wintrow, who has worked with survivors of domestic violence and sexual assault and has sponsored legislation aimed at helping them, described her initial reaction to the court’s decision as “visceral.”

Then, she said, she took a deep breath and gave the situation some thought. She began to see the decision as an invitation, rather than a crushing defeat. This could be an opportunity for more community-based solutions to domestic violence, whether someone proposes a constitutional amendment or not, she said.

“I see it more as an opportunity to be more creative in our problem-solving and helping people,” she said. “We can come up with better solutions.”