Danielle Radue of Meridian is facing a first degree murder charge after her two month old son died. Her bond is currently set at $1 million. 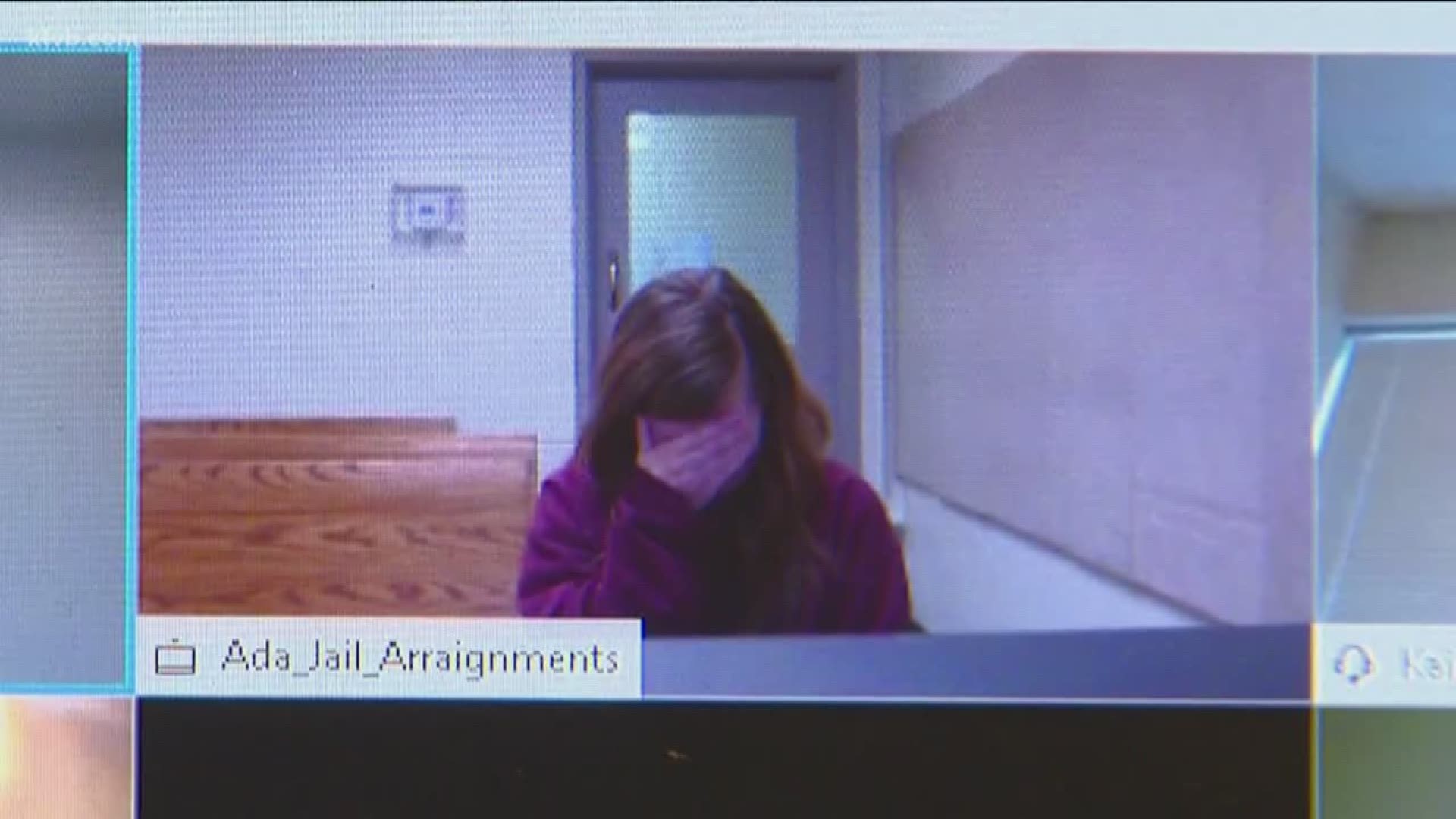 BOISE, Idaho — Content warning: This story contains descriptions of injuries to a child.

A Meridian woman is in the Ada County Jail facing a first degree murder charge for the death of her two month old son.

26-year-old Danielle Radue’s infant son died on Friday, May 15. On Monday, the Ada County Coroner determined the infant died from traumatic closed head injuries. The manner of death is still being investigated.

Police found Radue's baby unresponsive and rushed him to the hospital. He spent four days getting treatment before he succumbed to his injuries.

Radue was originally arrested on May 11 in connection with a felony charge for injury to a child. After appearing in court for the original felony charge, Radue was released on recognizance by a judge.

After the baby died, another warrant was issued for her arrest with a million-dollar bond. On Monday, she appeared in court so the judge could hear bond arguments.

Kai Wittwer was on the side of the prosecution. He argued that bond should be kept at a million dollars due to the inconsistent stories the defendant told investigators and the severity of the injuries to the infant.

In his bond argument, Witter went over the events that occurred prior to Radue’s first arrest.

Meridian police were dispatched to an EMS assist in Meridian. This came after the Radue called 911 herself. Wittwer said she did so from a neighbor’s house after her baby’s breathing became labored.

Radue told investigators she couldn’t find her phone, so she went over to her neighbor’s house to call for help.

“The defendant initially reported to an officer her son had been sick and vomiting for several days, and that he had been to the pediatrician during the previous week,” Wittwer said.

Once the baby was in the hospital, an ER doctor told police about the injuries they had found. The details are graphic.

“The baby had two areas of bleeding on the brain, he also had a skull fracture and reportedly had gone without breathing to cause brain injury,” Wittwer said. “The baby had suffered severe injuries to his brain and hundreds of retinal hemorrhages in both eyes.”

In court, the prosecution said these injuries are consistent with a very traumatic event. However, the police investigation showed the defendant had given investigators different statements regarding the events that led to the injury.

“She has told police that what immediately proceeded the 911 call was the baby screaming his head off, and [Radue] became frustrated and picked him up from the changing table and put him on the floor a lot harder than she meant to and claimed it wasn’t intentional,” Wittwer said.

However, the prosecution stated Radue told other stories that weren’t consistent with the first.

“At different times, she's also claimed that this was an accidental falling off the couch due to the dog coming up onto the couch,” Wittwer said. “Even that she tripped and fell, and the baby broke her fall.”

Ultimately, investigators determined the stories that portray this as an accident are inconsistent with the infant's injuries.

“The defendant’s statements about what happened, suggesting unintentional conduct, are not consistent with the severe and catastrophic injuries that the baby suffered,” Wittwer said.

After telling the court that the state is also concerned about the defendant’s psychological well-being, he asked the court to leave bond at $1 million.

Radue’s defense attorney, Edwina Elcox, argued that her client should not be held on a bond that high.

RELATED: Lori Vallow asks for her bond to be lowered again and hires a new lawyer

“The state is certainly entitled to amend the charge, but to obtain a warrant with the bond in the amount of a million dollars, when Dani was originally ROR [released on recognizance],” Elcox said. “The very nature of the original charging language contemplated death or great bodily harm; this is entirely outrageous.”

Elcox argued that while her client was out of jail, there were no issues with her, and she did not violate the conditions of her release.

Elcox also mentioned that the state modified the no-contact order Radue had to follow, allowing her to visit her child in the hospital for one hour on Thursday.

According to Elcox, the state wouldn’t have modified the order if they thought Radue was dangerous.

Wittwer later confirmed this happened, but said this modification was made on the condition that the visit to the hospital be supervised by law enforcement.

“A Boise police officer was standing by the entire time during that visitation,” Wittwer said.

Elcox also explained that Radue has little criminal history and has local ties in the area after spending most of her life here and graduating from both Timberline High School and Boise State University.

“Dani's criminal history is limited to a misdemeanor inattentive driving in 2015, she certainly has no crimes of violence. She has no history of FTA's [Failure to Appear’s],” Radue said. “Dani did not flee, so the prosecutor’s assertion that she poses a flight risk is absolutely inaccurate.”

Radue was also employed prior to the pandemic, but ultimately the downturn of the economy due to the response to COVID-19 forced her to be laid off, according to Elcox.

After listening to testimony from the defense and the prosecution, the judge decided Radue's bond would remain at $1 million. Radue is scheduled for a preliminary hearing on May 29 at 8:30a.m.

RELATED: Police: Baker County man threatened people with a knife while screaming in the street

RELATED: Boise man who exposed himself to schoolchildren gets prison