The Steamboat Gulch sled hill was shut down after visitors left trash behind, shot at trees and damaged the area by driving onto it. 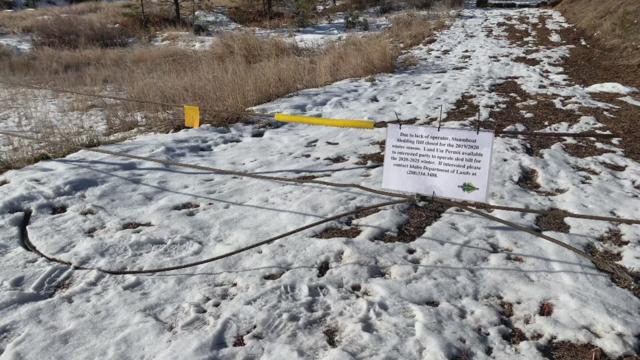 IDAHO CITY, Idaho — The Idaho Department of Lands has shut down a popular sledding spot near Idaho City after visitors repeatedly threw trash on the ground and damaged the area.

The Steamboat Gulch sled hill, located off of Idaho 21, used to be operated by the Mores Creek Recreational Foundation, which had a permit from the IDL to oversee the site. But the foundation ran out of money last year, and was unable to continue operating the hill.

The sledding hill was allowed to remain open without an official operator last winter, according to the Department of Lands. But visitors to the sledding hill did not hold up their end of the bargain: With no oversight of the area, the sledding area was damaged by people who left garbage behind, drove vehicles on the hill, and fired guns at the trees.

The IDL has worked with several partners to clean up the area, fixing ruts, rehabilitating the hill and seeding the area. The department hopes to reopen the sled hill in the future, but say it will be completely closed this winter to protect the restoration efforts.

A fence and a gate, installed to prevent more damage, now block off the hill from would-be sledders.

The Steamboat Gulch hill sits on land owned by the public school beneficiary, not public land. As a result, it is not operated by the U.S. Forest Service and is not eligible for the funding that can be granted to public sites.

"While the closed hill is a disappointment, it is not appropriate for IDL to take money out of the public school endowment fund to operate the sled hill," the department wrote in a release. "IDL welcomes a new permit holder to reopen the hill and be responsible for sledding, oversight, costs of operation, and damage control."