Customers are frustrated with long lines to get a driver's license. Some say the wait can be up to five hours. 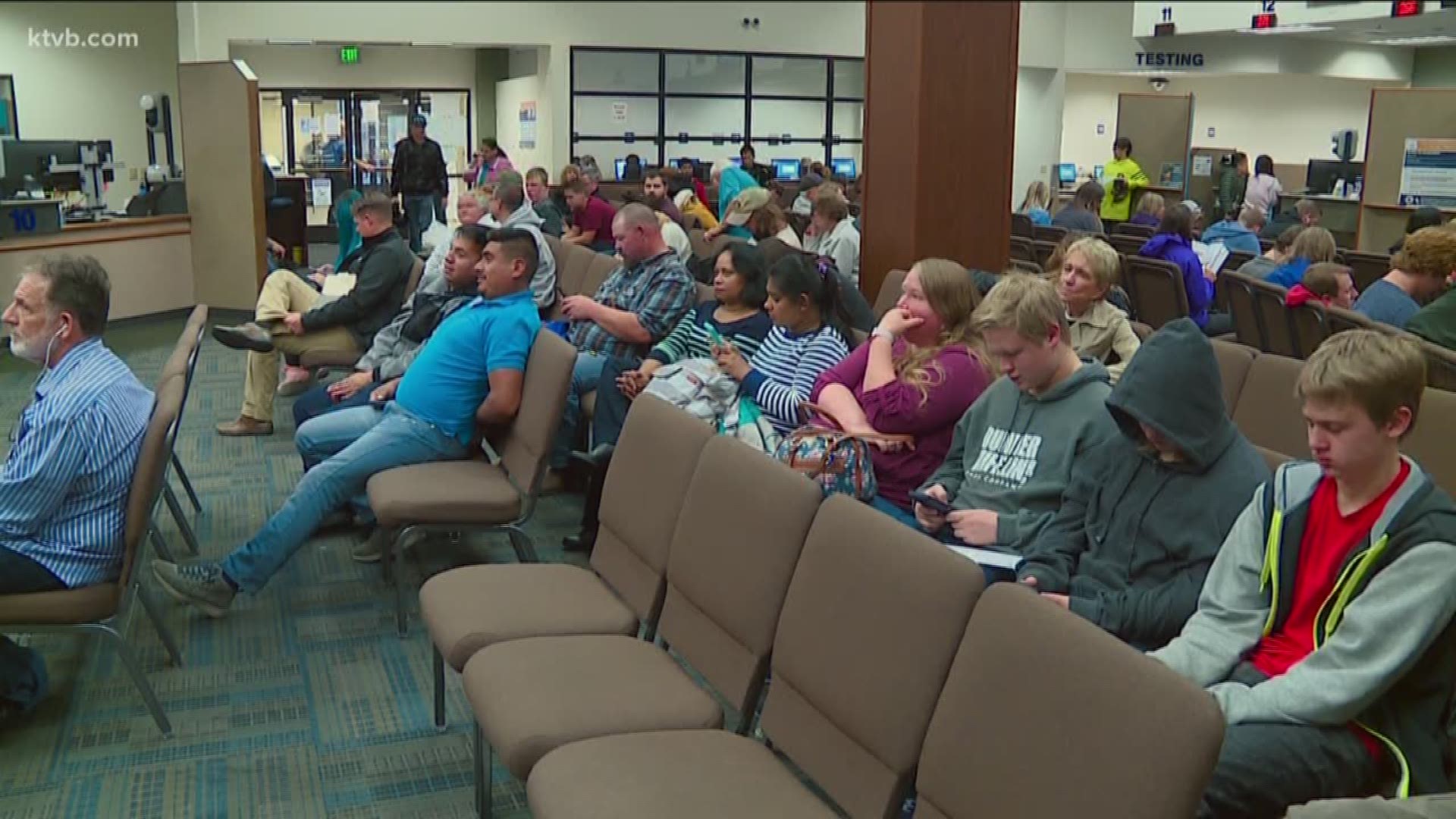 BOISE — Another day, another DMV delay.

The Ada County Sheriff's Office closed their driver's license office early on Tuesday, and it certainly wasn't the first time. Frustrations are boiling over as people still have to wait hours to get or renew their licenses.

If you haven't had to come down and visit the Driver's License Services on Benjamin Lane recently, lucky you. A trip to the DMV can be a notoriously daunting task, especially in Idaho over the last year.

“It's just one of those things in life you have to do,” Boise resident Aaudin Hota said. “It's frustrating, it’s definitely a headache.”

“I had no idea it was this bad,” Meridian resident Jennie Briscoe told KTVB. “When I first got here it was insane. The whole room was just packed and the whole foyer area was also just crowded. It was crazy. I walked in, I was like, what is going on? There was just lines and people standing and sitting everywhere and the parking lot was a mess. It was hard to find a parking space.”

The Idaho Transportation Department put an emergency extension in place, allowing anyone whose license expired July through September until October 31 to get it renewed.

"I've tried four different times to try to come and get my license renewed and every time I come there's an extended wait,” Nampa resident Jessica Saxton said. “Do you have two hours? I had a set of four hours, Friday it was a set of six hours. So what they've done is given you a letter that says you have until October 31 in order to get your license renewed. So I keep trying and trying and every time I come there's a wait, and it seems to be longer and longer and longer.”

But the process was especially cumbersome on Tuesday, the day after a government holiday that closed the DMV.

“I've been here just about four hours,” Hota told KTVB around 4 p.m. “It’s just kind of convenience out of our day. Instead of coming in here, being in and out, we're here for three, four, five hours. I mean, you can go get lunch come back and your number is still not called. I even went and picked up a buddy and took him home from work and came back and my number was far from being called.”

People were not thrilled about the wait times, with many calling them ridiculous and feeling in the dark about what was going on.

“How many times can you come and be turned away? Who can spend five hours at the DMV? No one! No one that I know, anyways, that really enjoys spending five hours - let alone one hour - at the DMV,” Saxton said.

Tuesday around 3 p.m., the Ada County Sheriff's Office closed Driver's License Services. There were more customers in line than they were able to serve given the time left in the day. We saw dozens of people being turned away in the hour or so we were down there.

“You get frustrated because what are your options? You have to have a license to be able to drive,” Saxton added.

Sheriff's offices run the driver's license services in our state, while software is overseen by Idaho Transportation Department, which relies on third-party vendors. As we previously reported, ITD upgraded the system for licenses, ID cards and some permits in August. Although the agency says this new system was already in their works, their previous system was 40 years old and causing major problems and repeated outages.

But according to signs posted on their doors, the new system, Gems, is leading to longer wait times. ITD says that compounding with outages and vendor software issues in recent months is causing a backlog of customers. Many people whose licenses expired during the troublesome timeframe - July through September - are now heading into the DMV to get their licenses renewed.

However, the transportation department says the new system is becoming more stable each day.

ACSO spokesman Patrick Orr says the new ITD system has been “running at about 60 to 75 percent efficiency compared to the days when the old system was working well.” Orr says transactions that used to take around seven minutes now take 10 minutes or more, which adds up.

The sheriff's office says delays are expected to stretch through the month. They've had to close their driver's license office early to new people more days than not since the new system was installed late August. Orr says if they are at 100 to 150 customers by 4 p.m. they have to close to ensure all those customers get served before 6 p.m. He adds that Tuesday was extra busy because they were closed Monday for the holiday.

In a statement to KTVB, Idaho Transportation Department said:

"The Idaho Transportation Department is working closely with our sheriff county partners to deliver efficient and reliable service to our customers across Idaho. Although there are some challenges in the interim, ITD has not lost sight of the need to work with the sheriffs, counties and our system vendor on a long-term solution.”

“Idaho state has not been able to get with the program like most DMVs,” Hota told KTVB. “With the implementation of a new system, I guess time will tell if it will work. But Idahoans seem to be pretty ticked off about it.”

In a message to officials in charge of the driver’s license services, residents said:

"Please extend your hours. We're trying to work with you and be patient during your transition, what about working for us just a little bit harder?” Saxton said.

“Communicate better about it, put the word out! Open another location,” Briscoe said.

You can also schedule an appointment online. But if you check now, you won't see openings until November.