7's HERO: Kuna High School student rescues boy after his foot became tangled in a rope in the water

When Trystan Herrera and his brother heard a panicked mom screaming in the strong current of Indian Creek, he jumped in and helped her son get to safety. 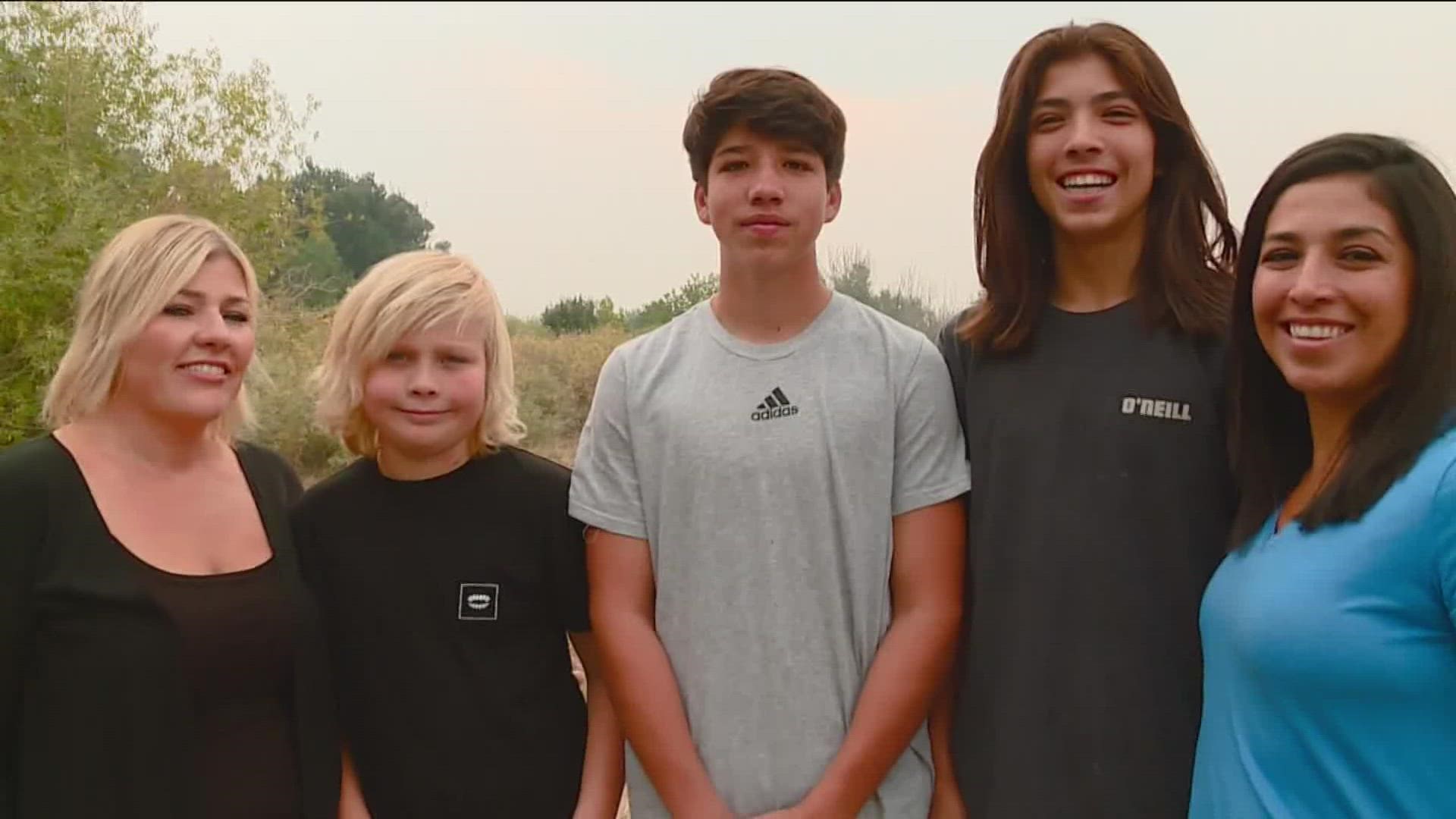 KUNA, Idaho — A Kuna mother's Facebook post went viral after she posted about the young hero that pulled her 11-year-old son out of Indian Creek on Labor Day.

"We had floated the river earlier that day," Britni Strong said. "They are used to swimming in this current here. We float this river every day in the summer, and my kids are very used to this water. They always wear life jackets."

"My foot got stuck, I fell back and I couldn't get my foot out," Asher said.

His mother saw him struggling.

"I said, 'Asher, come on, let go,' and he couldn't let go of the rope, and I noticed it was his foot. So immediately I dropped my stuff and tried to get in the rushing water, and the current was too strong. I couldn't get over," Strong said. "I could not get across. Every time I jumped in, that's when he would panic and go underwater, and that's when Trystan and his brother came over and saw me. We were screaming."

Brothers Trystan Herrera, 17, and Kai Herrera, 14, were on their bikes nearby.

"I could hear a lot of screaming and a lot of commotion in the water," Trystan Herrera said.

"I heard her screaming and her child screaming and I was like, 'This isn't good,'" Kai Herrera said. "So me and Trystan, we start sprinting over there."

Strong was still in the creek, soaking wet and panicked from trying to free her son repeatedly without success.

"They were like, 'Is everything okay?' And I was like, 'No, my son needs help!'" Strong said. "They just took off running, no questions asked. I was barely out of the water and he was out there getting my son."

Trystan Herrera knew he had to go in right away. He jumped in, fought the current, and swam as hard as he could right to Asher and the rope.

"Yeah, I could see him in the water, so I was like 'I have to do something about this,'" he told KTVB. "It was tangled up in his sandal or foot, one of those two. So I grabbed his foot, his ankle and I unhooked the rope. When he was free, he was drifting far-right and we needed to go left, and I had him grab my hand and I threw him closer to shore."

Strong couldn't believe what she was seeing.

"It was like he had some superhuman strength or something," she recalled. "He was a hero."

Asher was shaken, but he was okay. In all the chaos, Strong felt she didn't get the chance to properly thank the Herrera brothers. She put it on social media and it spread like wildfire.

"I posted it on Facebook. I did not mean for it to blow up like that, but I'm so glad it did," Strong said. "I just said I need to find him, I need to thank him. I need to give him the proper thank you. That day I was too frazzled to do that."

The Facebook post about Trystan Herrera's heroic actions was shared hundreds of times with hundreds of comments. Finding him wasn't hard in the small town of Kuna. Strong mentioned he went to Kuna High and his first name and that was plenty for people in the community to start commenting.

"I didn't know about it at first, and a friend told me, 'Someone posted all about you on Facebook and they are trying to find you. Is that you?' I was like, 'Yes, that's me,'" he told KTVB.

Once the Strongs tracked him down, they went over to the Herreras' house to say thank you.

"We went over and gave him a basket full of gifts," Asher said. "I want to say thank you for saving my life."

Strong said she can't say thank you enough to the Herrera brothers.

"I think that they are amazing. There's nothing I could ever say or do to explain my gratefulness for them because I could be going to a funeral instead of talking to you," Strong said. "I think we are very lucky."

The Herrera boys are getting a lot of attention, but they are humble through it all. Their mom said she, along with the entire community, is so proud of them

#7sHero A Kuna teenager helped pull a kid out of Indian Creek! Trystan Herrera rescued an 11-year-old boy who was caught in a rope in the rushing water and in distress. The boy’s mom is so grateful her little boy is safe & sound. Watch this hero’s story tonight on @KTVB. pic.twitter.com/yOEXr3kzyR