"The smoke from the West Coast can travel all the way to Europe," said Dr. Barry Lefer with NASA. 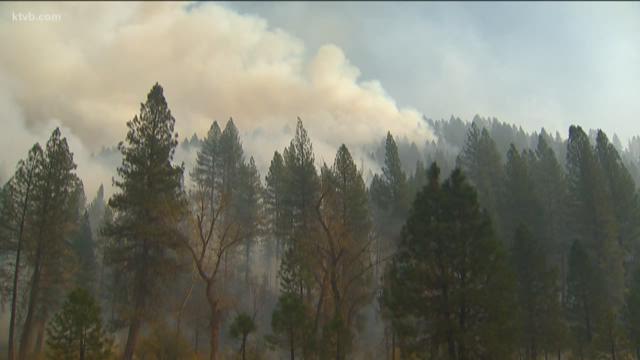 BOISE, Idaho — Scientists from NASA and NOAA are in Boise to study the smoke from our wildfires.

Crews brought two aircraft they plan to fly over several Idaho wildfires in the next couple days.

"We can fly over the fire, see how hot it is, fly around the fire and look at the dynamics of the wind and how they feed into it," said NOAA spokesman Alan Brewer. "The key thing with fire weather is the wind."

Wind can blow smoke particles from Idaho across the globe.

"The smoke from the West Coast can travel all the way to Europe," said NASA spokesman Dr. Barry Lefer.

With Idaho wildfires having the ability to impact other nations, scientists hope to learn as much as they can over the next few days.

"Really what we are interested in is the smoke when it comes down and it’s at the surface and people are breathing it," Lefer said. "But also, particles can be really absorptive and can cause a warming. So, we are also looking at the climate impacts of fire as well as health impacts."

The two planes that will be flying over the fires are equipped with machines that take chemical measurements of wildfire smoke.

It's something NASA can't do from space.

"We can see a lot of things from space," Lefer said. "We can see where the fire is, maybe how big the fire is, and we can see that there is smoke in the air but we really don't know what the smoke is made of."

Of all the states in the West prone to wildfires, scientists selected the Gem State as the best location to gather their data.

"Turns out, when you look at a map of all the fires for the past decade, this is sort of the center of the fire activity and this is where all the tankers are," Lefer said.

Data collected in the next six months will be analyzed by hundreds of scientists from across the world.

And one year from now, scientists hope they will have a better understanding of the impacts smoke has on our health and the planet.