The community feared economic devastation from the shutdown, but now the steelhead season is reopened. "There is a huge weight lifted off of our community's shoulders," said Richard Friend, the owner of River Adventures Riggins. "We were facing economic disaster without our winter steelhead season." 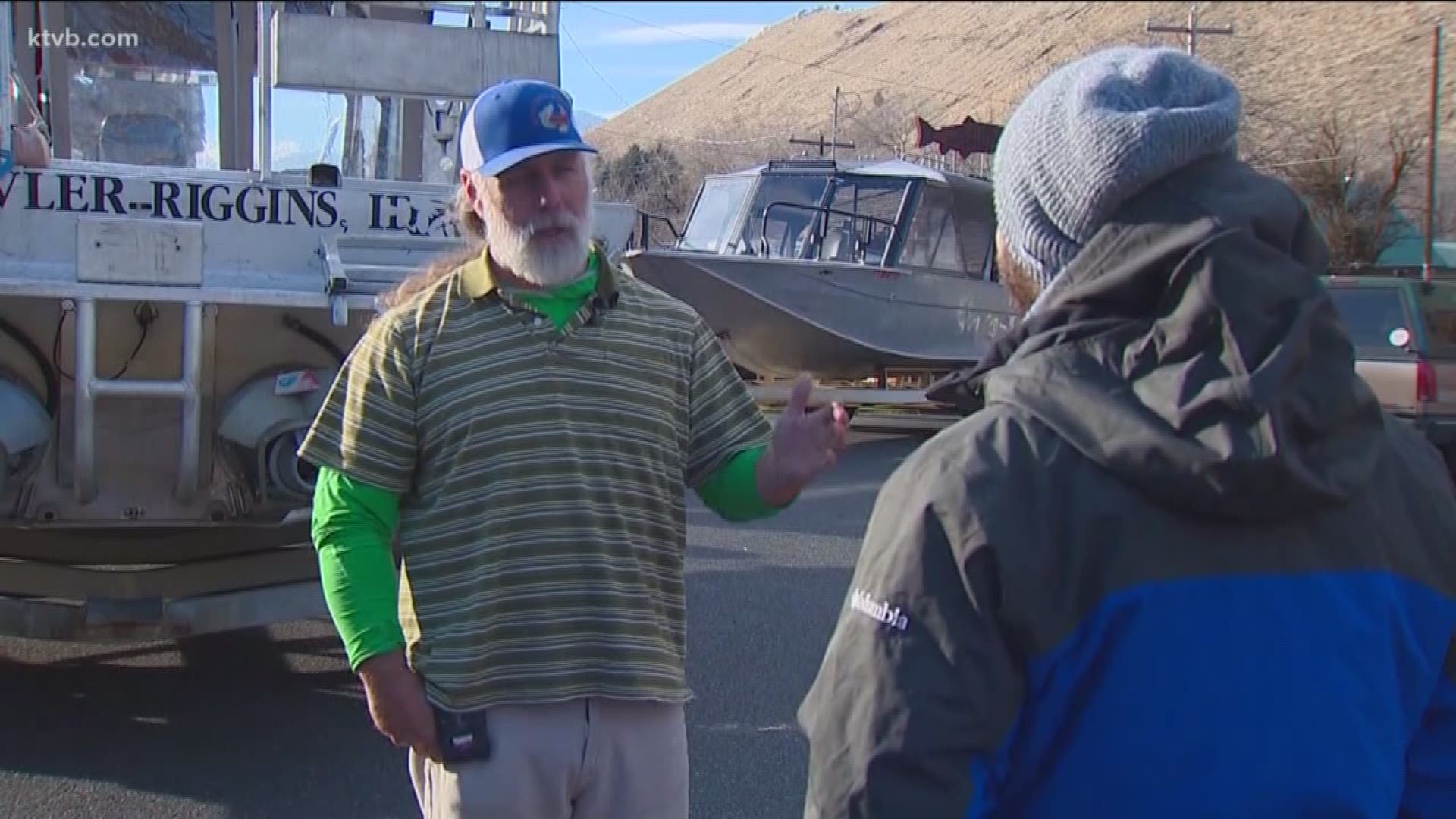 RIGGINS, Idaho — Update: The Idaho Fish and Game Commission made an agreement to reopen the steelhead fishing season. The community of Riggins is now planning to celebrate the decision. This story will be updated when further information is available.

With a critical chapter in a story for Idaho anglers unfolding just hours away on Friday, the community of Riggins braced for the economic devastation they say the shutdown of the state's steelhead fishing season will bring - and its residents are going to let their voices be heard.

Idaho Fish and Game said the suspension comes after several groups sent the state a notice of intent to sue over the federal government's failure to process Idaho’s Endangered Species Act permit.

Communities around Idaho fear the suspension will have grave effects on local economies.

In Riggins on Friday, residents were getting ready to stage a major demonstration to draw attention to the issue as they awaited the suspension to start at midnight.

The boats were out of the water, and the community hoped that visual would send a message: There is going to be a lot of lost business. And it’s not just the anglers who will lose. The town says they will all lose. And it will be a dramatic amount.

“Right now we are talking about probably several million dollars being lost from the town of Riggins because of this closure," Akins said.

The community here says it's paying the price for a paperwork technicality on the state's Endangered Species Act permit. That allows for the catch and release of wild steelhead.

“Because that permit is not in our hands or the state's hands, some outside groups were able to leverage an intent to sue Idaho Fish and Game and force them to close the season," Akins said.

John Belton, owner of the Seven Devils Steakhouse, said the effects of losing the season are plain and simple: "Something this severe is going to hurt everybody severely.”

And it will force many business owners, like Belton, to make very difficult decisions.

”More than likely close," he said. "You know, I’d rather stay open and keep the employees going for a living - but you gotta do what you gotta do.”

Just down the road, Rexann Zimmerman, owner of Hook Line and Sinker Tackle Shop, reiterated what everyone in town is thinking.

"It’s really going to hurt, it’s going to hurt bad," she said. "I may have to lay off my two employees to get through the winter.”

As the people of Riggins continue to fight, many say they are staying positive.

”Right now we are doing everything we can to hopefully promote the idea that we can find some way to move forward, keep our season open and wait for that permit to be in hand so we are back in accordance with all the laws," Akins said.

“I’ve gotta remain optimistic - the glass has gotta be half full, it’s just gotta be," Zimmerman said. "You can’t just roll over and quit! So yeah, I’m optimistic, I’m hoping”

The news that Idaho Fish and Game made an agreement late Friday night to reopen the steelhead season in most of Idaho was quickly met with elation.

“There is a huge weight lifted off of our community’s shoulders,” said Richard Friend, the owner of River Adventures Riggins said in a statement. “We were facing economic disaster

without our winter steelhead season.”

Local anglers are already planning to learn more about the voluntary regulations that were part of the agreement, which included using single, barbless hooks, keeping first fishery steelhead and not removing wild fish from the water.

“This is really a win for everybody,” said Roy Akins, the Idaho River Community Alliance chair and owner of Rapid River Outfitters said in a statement. “Now we can get back to work and focus the attention on fish recovery.”

On Friday night, the Idaho Delegation, including Senators Mike Crapo and Jim Risch, Congressmen Mike Simpson and Raul Labrador, released a letter to urge the NOAA Fisheries to hurry the permit process for the steelhead fishing season.

In the letter, the delegation said, "As you know, the indecision surrounding the State of Idaho's incidental take permit has forced Idaho Fish and Game Commission to close steelhead fishing season starting December 8th. The decision is prompted by threatened litigation and the associated liability for the State of Idaho. The immediate closure has led to uncertainty throughout Idaho that has caused continuing economic hardship to local communities."

Here's the full letter from the delegation: