Authorities say Melissa "Missy" Robertson was stabbed by her estranged husband Justin Robertson at her Spokane Valley home in April. 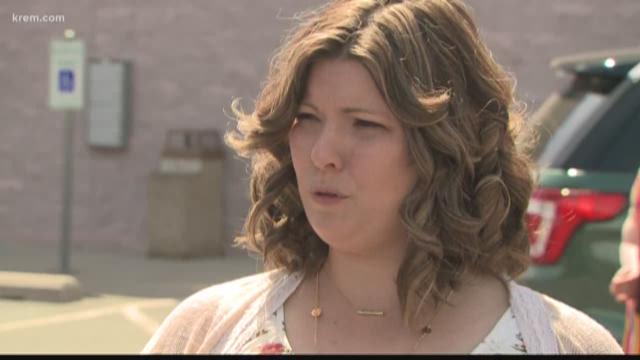 Editor's note: If you or someone you know is a victim of domestic violence in the Spokane area, click here for resources and how to get help.

Melissa Robertson, the woman who survived a Spokane Valley stabbing attack in April, met the dispatcher who helped save her life and told her story on Thursday.

Authorities say Melissa “Missy” Robertson, was stabbed by her estranged husband Justin Robertson at her Spokane Valley home on April 23. He fled with the couple’s 5-year-old son, prompting an AMBER Alert in several states.

Robertson recalled the events of April 23 at an event where she was reunited with first responders and ADT staff that helped her that morning,.

She said the night before started normally, but she woke up to one hand being tied with a cell phone charging cable while her husband, Justin Robertson, attempted to tie her other hand with a cable.

"Over the course of the next two hours or so, there was a lot of physical altercations that happened as I tried to escape, or as my 5-year-old tried to leave the room to go open a door to set off my ADT alarm," Robertson said.

She said once she was out of the room, she positioned herself in the view of a security camera before her husband moved the camera. After this, Robertson said she grabbed a key fob from her purse that had a panic button on it.

Robertson said she then set off the panic alarm, which was audible in the house and led to a dispatcher calling the house. A recording was played of the call, in which Justin identified himself as Melissa but was unable to give the proper passcode.

"They asked for my passcode, which of course he did not know and I refused to tell him," Robertson said.

Her husband then ended the call with the dispatcher, which is when he began stabbing her, Robertson said.

"I received over 62 knife marks [and] cuts, 16 of which had to be stitched at the hospital," she said. "My lung was punctured, tendons in my arm from defensive wounds."

She said that another call from ADT prompted Justin to leave with their son, who was yelling at Justin to stop. Robertson said she then tried to control her bleeding and apply pressure to her wounds until deputies arrived.

Robertson said she told deputies that her husband had taken their son, prompting the AMBER Alert.

According to court documents, Justin Robertson had a history of domestic violence and mental illness. Police said he died of a self-inflicted gunshot wound on April 23 following an hours-long standoff in St. John, Washington.

The 5-year-old boy was safely released.

Robertson said that her husband had been suffering from depression and suicidal thoughts for years. She also said that his loved ones missed him.

The dispatcher flew 2,000 miles from New York to meet Melissa.

At the event, ADT provided $5,000 checks to the Spokane County Sheriff's Office, the Spokane Valley Fire Department and the Spokane chapter of the National Alliance on Mental Illness.

Spokane County Sheriff Ozzie Knezovich said he was happy to see that Robertson was recovering.

"I'm glad to see she is doing well and that her son is also doing well," Knezovich said.

He also called on lawmakers to provide more funding for mental health resources, and said that domestic violence has made up 78 percent of homicides in Spokane County over the last five years.

Knezovich would go on to talk about being able to reunite Robertson with her son.

"It was one of our best moments when we were able to reunite them both," he said.

Kami Schiller is a YWCA's legal advocate. She helps survivors of domestic violence navigate the legal system and find resources. She said talking about it is one of the hardest steps in the process.

"In general it a very difficult thing for someone to do, when they are talking about reporting, it's really kind of airing your dirty laundry, some of intimate details of your relationship," said Schiller. "It's also being uncertain if you're going to get the justice that you're hoping or if it's going to have the outcome or if your partner is going to get the help or treatment that they need."

Schiller said she's noticed when survivors hear from other survivors they're more likely to get help.

"When someone realizes they are not alone, they are not the only one that's going through a harmful relationship it can give another person the empowerment they need to speak up or speak out about what's going in their everyday life with their partner," she said.

RELATED: How Spokane domestic violence victims can protect themselves after AMBER Alert attack