The former Idaho governor and secretary of the interior had a love of the outdoors seen firsthand by those with whom he fished and hunted. 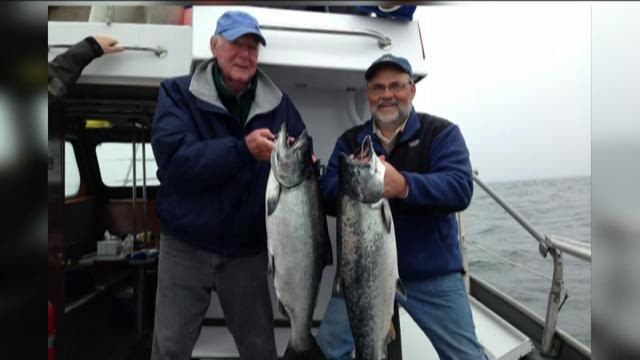 BOISE - He served four terms as Idaho's governor and served the country as the secretary of the interior under President Carter, Cecil Andrus died Thursday after a long battle with cancer, one day shy of his 86th birthday.

As governor and interior secretary, Andrus was pivotal in putting millions of lands into wilderness preserves. But he wasn't just an advocate for the outdoors - he was an active advocate, a love of the land seen firsthand by those with whom he fished and hunted.

On June 27 of this year Andrus hauled in the last salmon he would ever catch, a 9-pound king salmon in Ketchikan, Alaska. Fittingly, in the same area he helped set aside as preserved wilderness.

In one picture, you can see that land legacy stretching out behind him. But what you notice first is that smile on Andrus' face, something he showed a lot of when surrounded by nature and his friends.

"I was trying to think if I've ever seen him miss a pheasant," says Wally Hedrick, who first met Andrus in the 70s.

"Being from Twin Falls my family was probably the only Democrats in Twin Falls County," remembers Hedrick.

Hunting was their common ground, and it cemented their friendship for 40 years.

"And he loved to take his grandson hunting and be in the outdoors," says Hedrick.

That love of the outdoors was something Andrus felt important to pass on.

"He loved the idea that this was something that was going to be around for his grandkids and great-grandkids," says Hedrick. "And all the kids in Idaho."

The last time Hedrick was out hunting with his friend was in January, hunting geese in 8-degree weather.

"I said, 'Don't worry, it's going to warm up,'" says Hedrick. "About a half hour later it was 3 degrees. And just then about 12 geese came in. He got one, two, three with three shots and he looked at me and said, 'I think that's enough fun for the day, let's go get warm.'"

Hedrick says the former governor was just a regular guy who could talk to dirt-covered farmers in the same manner he would speak to the president of the United States. And that is what he will miss most about his friend.

It's the same sentiment shared by most people who knew Andrus.

"The most remarkable thing about Cecil was the fact that when you were with him it wasn't remarkable," says

Tom McGrath. "It was just easy friendship, easy fun. You didn't feel like you were in the presence of greatness, although, indeed you were, but he didn't make you feel that way."

Tom and Patty McGrath have been fishing friends of Andrus for more than 10 years but Tom actually worked on Andrus' campaign back in 1970. And throughout the next few decades he would see Andrus occasionally around town.

"And the thing that I remember is that he remembered my name," recalls Tom "And I thought that was pretty incredible because I myself am not good at that."

From then on they were a fishing family.

"And then he went fishing with us in our boat in Lucky Peak (Reservoir) to pursue Kokanee," says Tom.

And he was fond of Patty's preserving skills.

"The first time he tasted one," says Patty, holding a vacuum-sealed jar of Kokanee salmon. "Oh wow, that was it! Of course, he's going to bring back my jars and get more Kokanee."

Andrus was just in the McGraths' kitchen in January, returning jars to be refilled.

And the stories he would tell at camp, the McGraths say, would tickle everyone.

"His laugh, he had the best laugh," says Patty. "And you could not be around Cece for more than 15 minutes without hearing it."

It's those moments that will remain clearest for the McGraths.

"You know we lost a dear friend yesterday," Patty says quietly. "But he was one of those that you will just remember forever. I don't know why I was thinking about him yesterday. Well, I'll miss you Cece."