Is Treasure Valley traffic really that much worse than it was a few years ago? 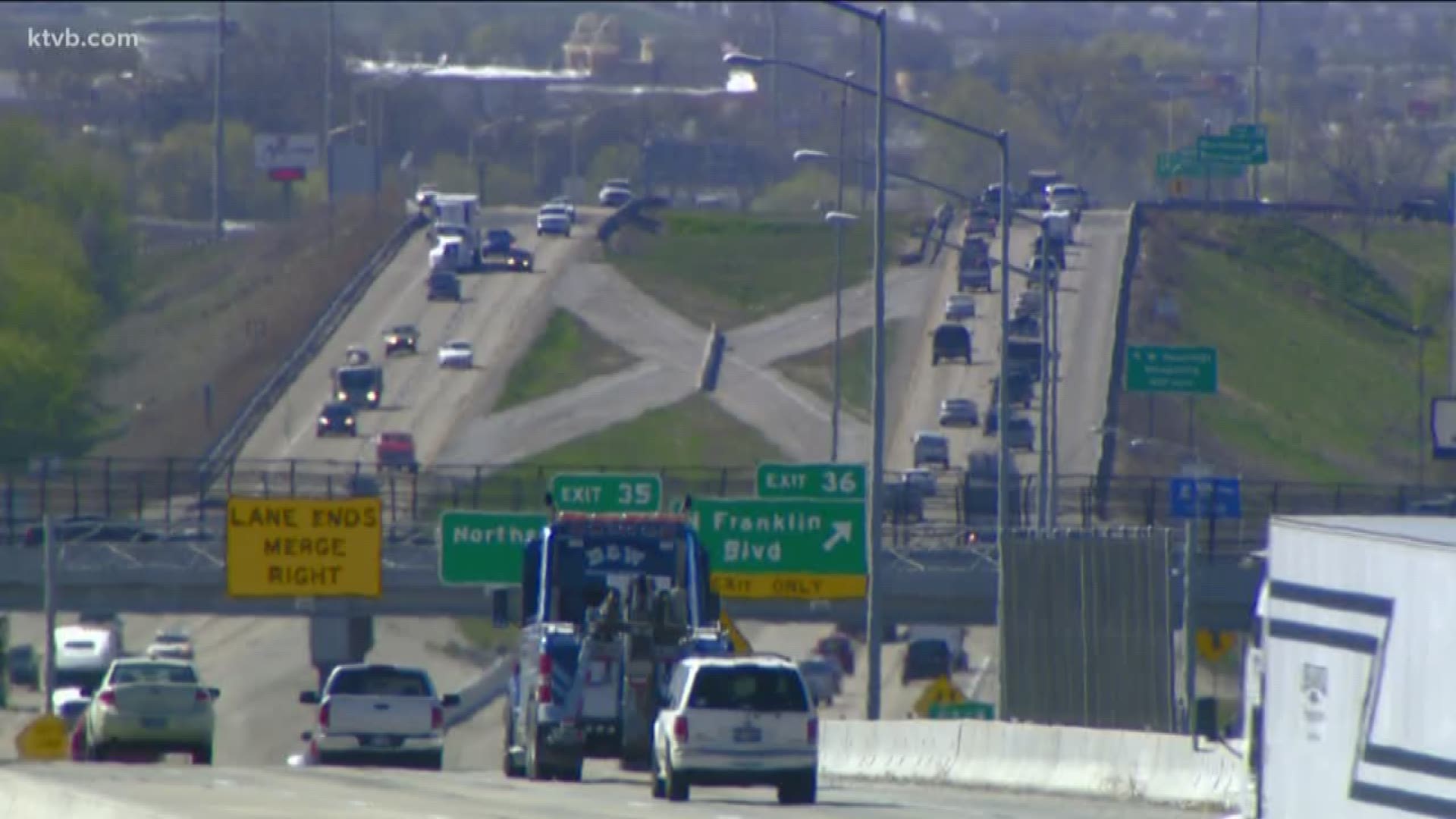 BOISE, Idaho — Complaining about worsening traffic could be one of the few unifying experiences for locals and Treasure Valley newcomers.

Just look at the daily commute from Caldwell to Boise. It has nearly doubled in the last 10 years.

That's one of the most dramatic congestion increases in the last few years. But is it a similar story for other thoroughfares?

The answer comes down to simple math, according to MaryAnn Waldinger, the principal planner at COMPASS, a community planning association that has been tracking commute times and traffic numbers since the early 2000s.

"So is it worse than four or five years ago? Yes, because we've added a lot of people so it is getting busier out there," Waldinger said. “Absolutely we have seen increases and volumes."

However, Waldinger says average commute times haven't changed too much in the last 10 years, with a roughly 10 percent rise. That increase is based on a weekday average over the course of a year.

"So you have good days and you have really, really bad days. That kind of starts to average itself out a little bit," Waldinger said.

And if you think traffic is bad now, just wait until 2040 when the valley is expected to reach a population of over 1 million people.

Take a look at three major traffic thoroughfares in the valley - Chinden Boulevard (or Highway 20), Eagle Road, and Interstate 84 between Caldwell and Boise.

Average weekday speeds on Chinden Boulevard, also known as US 20/26, have stayed fairly consistent between 2013 and 2017, according to COMPASS data.

The data also shows how much traffic speeds drop during peak commute times in the mornings and evenings.

While average traffic speeds have stayed consistent on Chinden Boulevard, commute times between Caldwell and downtown Boise have drastically changed, nearly doubling between 2007 and 2018.

This route saw the largest jump in commute times out of three roadways analyzed.

Commuting on Chinden from Caldwell to downtown Boise saw an increase of 28 minutes over 11 years, from an average of 35 minutes in 2007 to 63 minutes in 2018.

This route's travel time changed the most out of the three roadways analyzed in terms of commute times.

MORE: As the Treasure Valley continues to grow, one driving tactic could save commuters time and headaches

Data of average weekday speeds on northbound Eagle Road between State Street and I-84 show that speeds remained fairly consistent between 2013 and 2017, with expected slowdowns during every weekday morning and evening.

1 / 2
COMPASS
This graph shows the average weekday speeds on southbound Highway 55 throughout an average day from 2013 to 2017.

Most of the vehicle volume increases and travel time decreases over the past five years have occurred west of Eagle Road, where the road changes from two lanes to one lane in each direction.

Traffic arteries between Boise and Caldwell have all seen traffic speeds drop during rush hour and overall commute times between the cities become longer.

But again, is it as bad as people make it out to be?

Traffic on the I-84 from Caldwell to Boise peaks around 7 a.m. when the average weekday speed dips to the slowest speeds.

1 / 2
COMPASS
This graph shows the average weekday speeds on the eastbound Flying Wye Interchange between 2013 and 2017.

Outside of peak travel hours, average weekday speeds have stayed consistent with the speed limits on the interstate, even with a greater overall volume of cars on the road.

Data from COMPASS does show more drivers traveling toward Boise from the western part of the Treasure Valley during morning peak times as people typically head to work. This is the case on the three connections between the two cities.

The large volume of traffic in some spots though may be giving the illusion of significantly worse drive times, especially on traffic arteries throughout the Treasure Valley.

On I-84 from Boise to Caldwell, the real trend is the volume increase from 2003 to 2018, not significantly longer commute times.

The addition of over roughly 100,000 drivers between 2003 and 2018 on the road has only translated into an increase of 12 minutes of commute time.

With that said though, Waldinger says the actual data surprises people who think things have gotten dramatically worse and expect to see a higher number.

The averages do also lessen the sting, she said. but when "we have a bad day we have a really bad day."

2040 could be dramatically worse

Although things right now are not dramatically different across the board, they could be by 2040. Projections predict roughly 300,000 people could move to the Treasure Valley in the next 20 years.

“I suspect that we will see commute times peak a little bit during those peak hours," Waldinger said.

Estimates show popular routes will see some of the biggest increases during peak travel times by 2040: 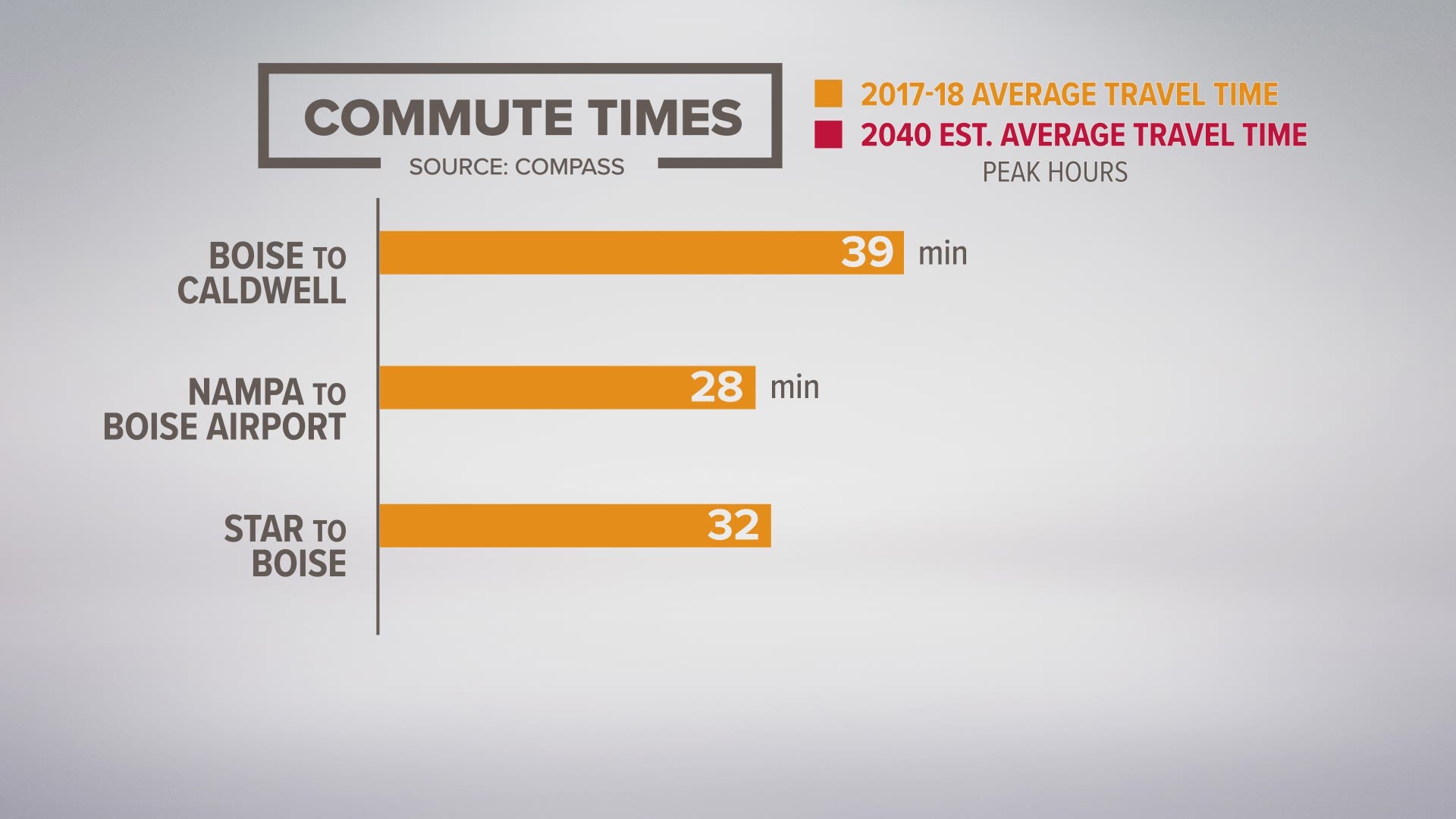 “So we really have to get serious, we as a community need to get serious about everything, all facets of our transportation system," said Waldinger.

One of the ideas to better fund and transform the valley's public transportation would be a public tax option, according to Waldinger.

The public tax option would allow cities and counties to tack on additional sales taxes that would be directed towards funding public transportation.

She also warns that better public transit wouldn't save all of the region's traffic woes, but it's a start.

“Public transportation is definitely something we need to invest in," she said. "It definitely won't solve the issue but it at least provides an option to folks."