As the school year approaches, the Brown Bus Company only has about 75% of the staffing it wants. 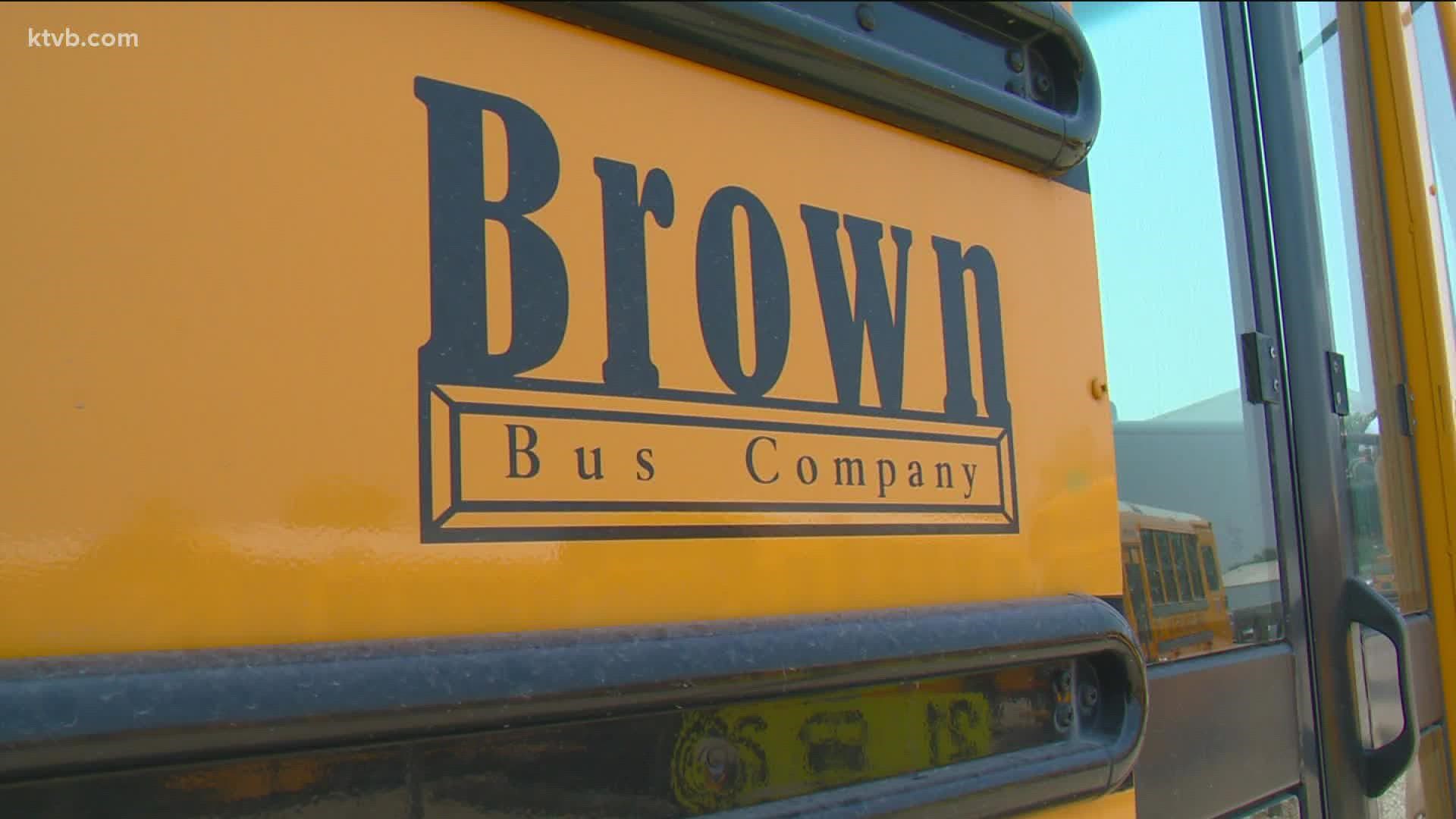 NAMPA, Idaho — Editor's Note: This article was originally published by the Idaho Press.

Brent Carpenter compares the Brown Bus Company’s situation to being on the brink of a ledge. The school bus company can try to get by for now, but a worst-case scenario could still play out.

As the school year approaches, the Brown Bus Company only has about 75% of the staffing it wants. Carpenter, the company’s operations manager, said the need is urgent and has put him in scrambling mode.

“It wouldn’t take a very strong breeze to push us over that cliff because the number of drivers that we’re down,” Carpenter said. “If we have a couple quit, have a couple that get sick, that throws a wrench in all the plans.”

The Brown Bus Company serves the Nampa, Vallivue and Wilder school districts as well as more than a dozen charter schools. It buses more than 12,000 students daily. Carpenter said the company is about 40 people short for buses based at its Nampa office and about 20 people short for buses based at the Vallivue office. The company has posted hiring signs in front of schools and on a billboard. Advertisements have been posted on websites and job boards.

If the staffing goals aren’t met, Brown Bus Company will work with school districts to reshuffle bus routes and minimize the effect. Since the emphasis is on fulfilling regular routes, field trips and activity buses could take a hit. Even those regular routes could come with delayed pickups and late arrivals.

“It has implications of routes might run longer. Kids may arrive late. They may be picked up late,” Carpenter said. “That’s what we’re trying to avoid, any disruption of education and any disruption of service to the students and to the families.”

Driver shortages aren’t new to the Brown Bus Company. Rarely has the staff reached 100% in the past few years. But usually the company could at least make it work.

Carpenter has been with the Brown Bus Company for 30 years. “This is the worst I’ve ever seen it,” he said.

Peter Jurhs, Nampa School District executive director of operations, said the worst-case scenario is to have bus stops missed entirely. In that circumstance, a bus would need to finish its full route before circling back to pick up more students. Maybe a student would get on the bus at 9:30 a.m. instead of 8:30, for example.

The school district and bus company are working to consolidate routes to avoid this. What’s more likely to be affected are buses for extracurricular activities. Since the priority is to take students to and from school, there might not be buses available to take them to athletic events. Training drivers takes about six weeks, so there’s a lag period even after new ones are hired.

"We have very limited, to no ability, to cover trips that might conflict during route times," Carpenter said.

Middle school sports games typically start at 4:30 p.m. The regular bus schedule doesn’t wrap up until that time. That leaves a hole in the schedule.

“Those start getting very challenging, if not impossible,” Jurhs said.

To entice new drivers, the Brown Bus Company has been offering a $1,500 sign-on bonus for the past few years. This year, pay is increasing from $14.25 an hour to $16.50. Carpenter considers it a competitive wage for a part-time job and he hopes it makes a difference.

When extra unemployment benefits were slashed a few months ago, Carpenter thought that might lead to more applicants. But that didn’t happen at first, he said. In the past couple weeks, there have been more applications, but still not enough to fully solve the situation.

Carpenter told KTVB there are more than ten applicants who could potentially begin training soon. Training typically lasts six weeks, according to Carpenter. If the current path holds and the applicants stay through the process, Carpenter believes the Brown Bus Company could have a handle on the driver shortage by October.

"We still have a lot of work to do in regards to bringing more people on and training those who are in our training program as it is," Carpenter said.

Knowing employees might leave and drivers may have to quarantine due to COVID-19, the gap between how many drivers the company has and how many it wants could widen at any moment.

Jurhs said he tries not to let the lack of bus drivers keep him up at night.

To mitigate the issue, the Nampa School District is looking at alternative options to transport their students to and from after-school activities. The school district has access to white buses that can hold 14 people; this will likely be a transportation option for small teams and groups, according to Jurhs.

As for larger groups with equipment like the football team, the school district is looking to rent charter buses. As a last resort, students and parents will have to drive themselves.

The school district is hoping it won't come to that.

“This is a community issue,” Jurhs said. “In a really big fashion, this is something the community needs to think about and how we’re going to address. Busing companies, they’re short. … The community needs to have a little patience with us and if they have the opportunity, to try and share the need with somebody who might be able to fill those gaps.”

Carpenter isn’t sure what’s causing the shortage. Similar worker shortages in different industries have played out across the country and in the Treasure Valley since the spring. The Nampa School District is also trying to fill six full-time positions on its nutrition staff, Jurhs said.

Carpenter said he calls school bus driving a “perfect part-time job.” Drivers have evenings, weekends and holidays off and get time in the middle of the day in between routes.

They also can brighten a student's day with just a simple smile.

“Yes, it’s a job, but there is a component of it of service and community service,” Carpenter said, “because education, I think we’ve all, over the last year-and-a-half, have realized how important face-to-face learning for these kids is.”