A recent White House report lists Idaho as one of 18 "red zone" states for COVID-19. Hear what a doctor on the state coronavirus task force had to say about it. 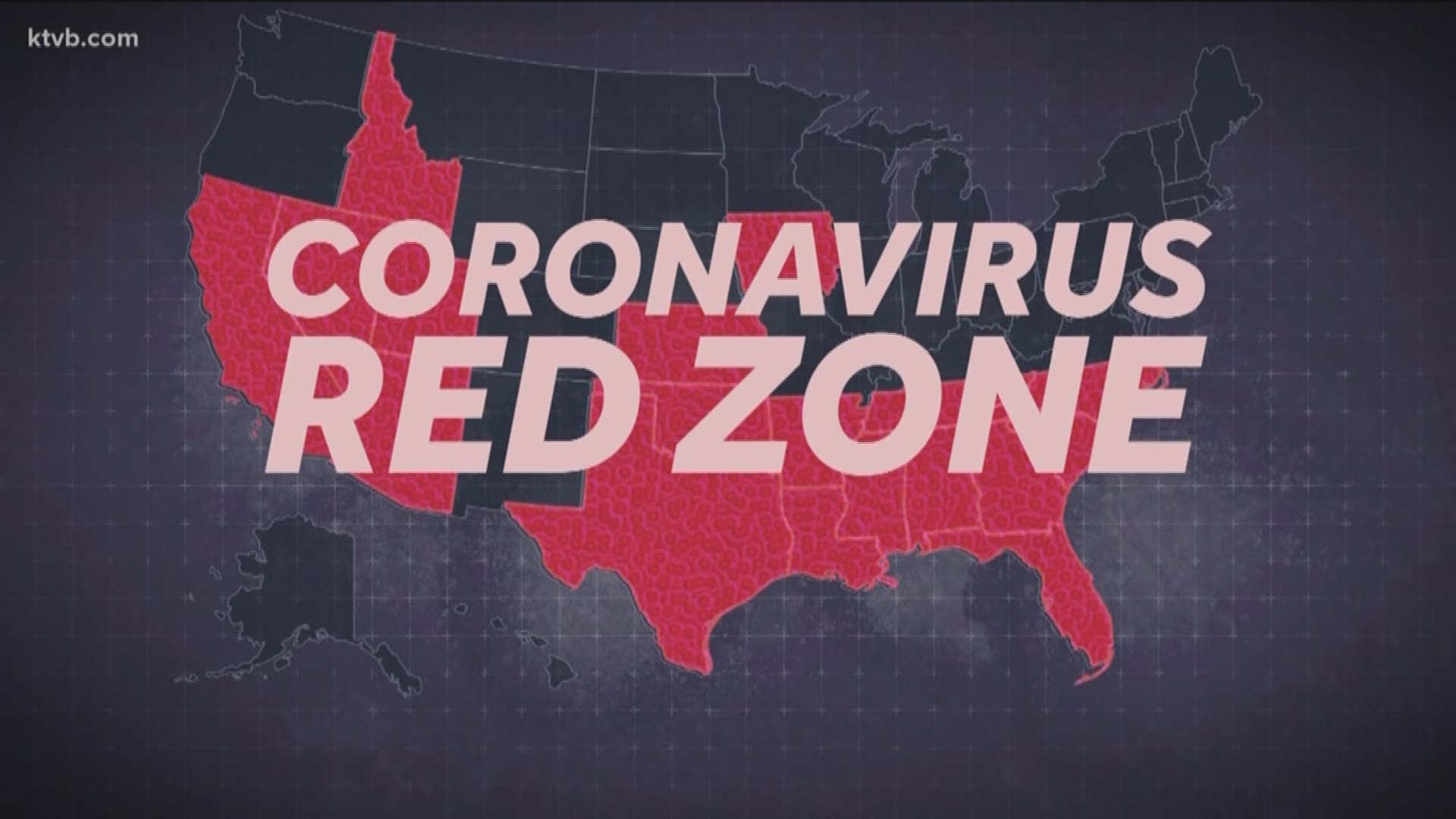 BOISE, Idaho — Idaho has made its way into a White House report, but it's not for a good reason.

A report was compiled for the White House coronavirus task force and was obtained, then released by the Center for Public Integrity.

That report listed 18 states, including Idaho, that were considered "red zones." That means those states were seeing more than 100 new coronavirus cases per 100,000 people.

Over the last few weeks, Idaho has reported anywhere between 300 and 700 new cases per day.

Dr. David Pate, a member of Idaho's coronavirus task force, said the recent surge in cases is extremely concerning to him.

“I’m actually even more concerned about this than the first spike we had,” he said.

“We’re not peaking and coming down," Pate added. "Some people think that, [but] I don’t believe it. We’re going up and it’s going to get worse when school opens.”

Not only is the increasing number of positive cases concerning, but so is the story behind those numbers.

That's especially concerning to Pate because statewide, more young people are being infected.

Because many younger patients are often asymptomatic or show only mild symptoms, they could have COVID-19 and go undetected for a longer period of time. Those people are then around older adults or at-risk populations, such as their parents and grandparents, who are then exposed to the virus. Many of those at-risk members can then end up hospitalized, causing a surge in healthcare needs.

The same White House report also looked at states with a positivity rate higher than 10%, which Idaho surpasses.

Health officials want to see a 5%, or less, positivity rate. That means out of every 100 people tested, 5 or fewer would come back positive.

At about 15%, Idaho's positivity rate is currently triple that number.

According to Pate, those who argue the increase in positivity rate is simply because of more testing, are wrong. The more people you test, the more likely you are to have negative cases as well. If it was simply an increase in testing numbers, Pate said that the positivity rate should trend downward. But it's not, which indicates more people are actually getting sick.

Pate said that Idaho is not in the same position as many other states it's compared to in the White House report. Some areas of the state are doing well, with low infection rates. But others like Ada, Canyon and Kootenai counties, are not doing well and are seeing high infection rates.

Many of the states included in the White House report are dealing with a surge past healthcare capacity. Idaho is not there yet, but recent trends show that's where the Gem State is headed if things don't change.

“Even though we may have been in a little bit of a lull here because we haven’t been alarmed about hospitalizations or deaths, they’re coming," Pate said. "And I’m very concerned about this and we’re starting to see the deaths tick up. Certainly, we've seen the hospitalizations go up – they’ve more than doubled in about 10 days' time.”

He believes if the virus doesn't slow, more hospitalizations and deaths are on the horizon. To illustrate the threat, he compared it to a wildfire.

“As long as there’s timber for this wildfire, and you’re not putting water on the fire, it’s going to spread and that’s our situation," Pate said.

He urged people, particularly those in harder-hit areas, to social distance and wear masks for the next few months to help slow the spread. He said this is especially needed before school is back in session, to help lower the spread and protect kids and educators.

Because the COVID-19 situation varies so broadly across different parts of the state, a lot of decisions like requiring masks have been left up to local leaders and health districts.

Pate is urging those local officials to do something.

“This is the time for us to act," he said. "We need to do things now because anything we do is going to take two, three, four weeks to have an impact anyway so you don’t wait until you get in that crisis situation.”

According to Pate, the state task force is working on ways to improve and increase testing and how to get more PPE supplies.

RELATED: Ada County clerk calls for a special session to address election concerns due to coronavirus

RELATED: Saint Alphonsus doctor explains the risks for schools opening, effectiveness of face masks and what herd immunity is