Masks are now required in Coeur d'Alene. Here's what you need to know

The mask mandate for Coeur d'Alene goes into effect on Tuesday, Oct. 27 and will be in place for 90 days unless it is terminated, modified or extended. 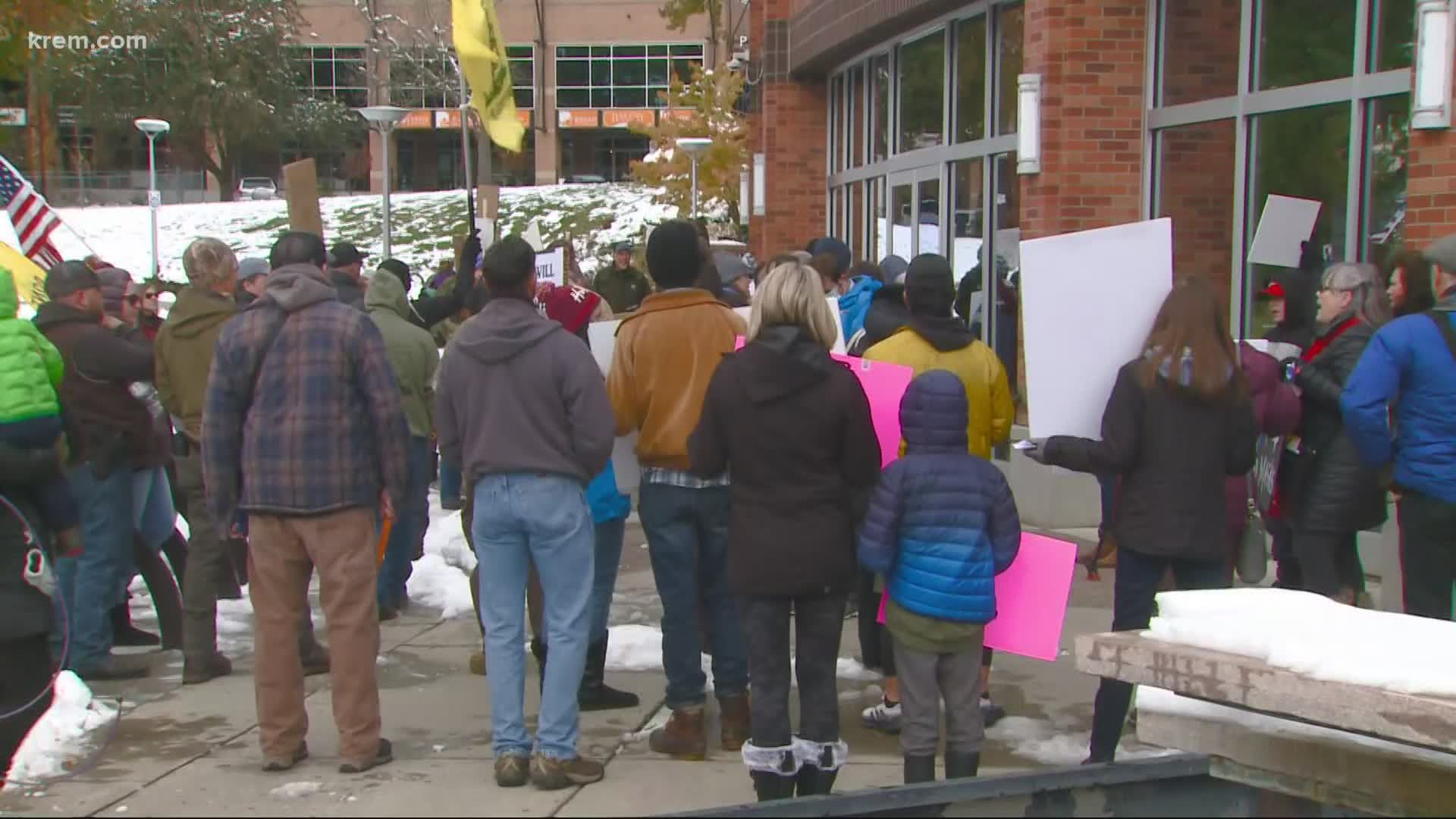 COEUR D'ALENE, Idaho — Masks are required in Coeur d'Alene, with some exceptions, beginning Tuesday after the Coeur d'Alene Council voted in favor of a mask mandate.

This comes as Idaho Gov. Brad Little announced that the state would roll back into Stage 3 of its reopening plan on Tuesday due to increased demand and strain on healthcare facilities.

The city council's 4-2 vote to approve the resolution requiring masks came after a contentious emergency meeting that lasted for nearly two-and-a-half hours.

Despite the county's only hospital nearing capacity last week, Panhandle Health District's board voted to lift the mask mandate for all of Kootenai County. A recommendation to wear a mask still remains in place for the entire county.

The resolution in Coeur d'Alene requires masks in indoor or outdoor public places beginning Tuesday, Oct. 27 and will be in place for 90 days unless it is terminated, modified or extended. A violation of the mask mandate is an infraction subject to a $100 fine.

City council members also voted to make changes to the original resolution, including exceptions for children 10 and under, first responders and people with medical conditions. Officers with the Coeur d'Alene Police Department can ask people about their medical condition but they cannot require proof, Councilmember Dan Gookin said.

Coeur d'Alene Mayor Steve Widmeyer expressed his desire for other cities in Kootenai County to require masks, adding that the mandate in his own city is "the best we can do."

Widmeyer previously said in a statement sent to KREM in July that he "would not vote to mandate masks."

“For me, doing nothing is not an option," Widmeyer said during the meeting on Monday. "So there's going to be some people out there they're going to say, 'Oh, Widmeyer went against his word because he said he would never mandate.' Situations change, and we're in a much different situation— three-and-a-half months down the road, where we are today and we're in a critical situation right now.”

There are 35 COVID-19 patients hospitalized at Kootenai Health as of Monday, Oct. 26, with 11 of those who are receiving critical care.

RELATED: North Idaho COVID-19 cases rise to over 5,000 since start of pandemic

In response to the recent spike in cases throughout North Idaho, some local school districts transitioned to hybrid models.

In the Coeur d'Alene School District, high school students are back on a hybrid schedule. Elementary and middle school students will be going to school four days a week with one day of virtual learning.

In Post Falls, classes will go back to being in-person every other day instead of full-time.

Idaho Gov. Brad Little also announced on Monday that Idaho would move back into Stage 3 of its reopening plan as healthcare facilities throughout the state are facing increased demand and capacity restraints due to coronavirus. Masks are not required under Idaho's reopening plan.

The following restrictions will be in place statewide beginning Tuesday, Oct. 27:

RELATED: Idaho rolled back to Stage 3 of reopening plan amid coronavirus spike

KREM's Amanda Roley shared video on Monday afternoon of people protesting the mask mandate who were banging on the window of the Coeur d'Alene Library during the emergency meeting. The crowd of several dozen people was heard chanting, “No forced masks! We will not comply!"

Officers with the Coeur d'Alene Police Department say the meeting room reached its maximum of 15 people.

CDA: People outside the CdA library are banging on the window, frustrated they are not being allowed inside for the emergency meeting. @CdAPD officers say the room has reached the max. of 15 people. @KREM2 (council is considering a citywide mask requirement). pic.twitter.com/TcpFu7Hw29

CDA: Crowd is chanting “no forced masks! We will not comply!” @KREM2 pic.twitter.com/SJ69SXDqHk

27 Kootenai Health staff members with COVID-19 are not working

Jon Ness, Chief Executive Officer at Kootenai Health, said during Monday's emergency meeting that there was one day when the hospital had only one bed available. Another representative said on Monday that the hospital was recently able to add 31 beds to its medical-surgical area of the hospital but it doesn't yet have the staff available for them.

The hospital is using remdesivir, an antiviral medicine given through an IV that was recently approved by the Food and Drug Administration as the first drug to treat COVID-19, according to information shared during the city council meeting

Many coronavirus patients are also receiving steroids and oxygen therapy, along with some who have qualified for convalescent plasma treatment.

A representative for Kootenai Health said on Monday that 132 employees of the hospital have tested positive for COVID-19 to date. Twenty-seven are currently being monitored and not working.

More than 85% of positive cases among Kootenai Health staff members have been traced back to community spread, while about 10% were related to coworker exposures and less than 5% were related to patient exposure.