A prosecutor warned Tuesday the defendants could pose a "potential danger to other women" if allowed out of jail before their trial. 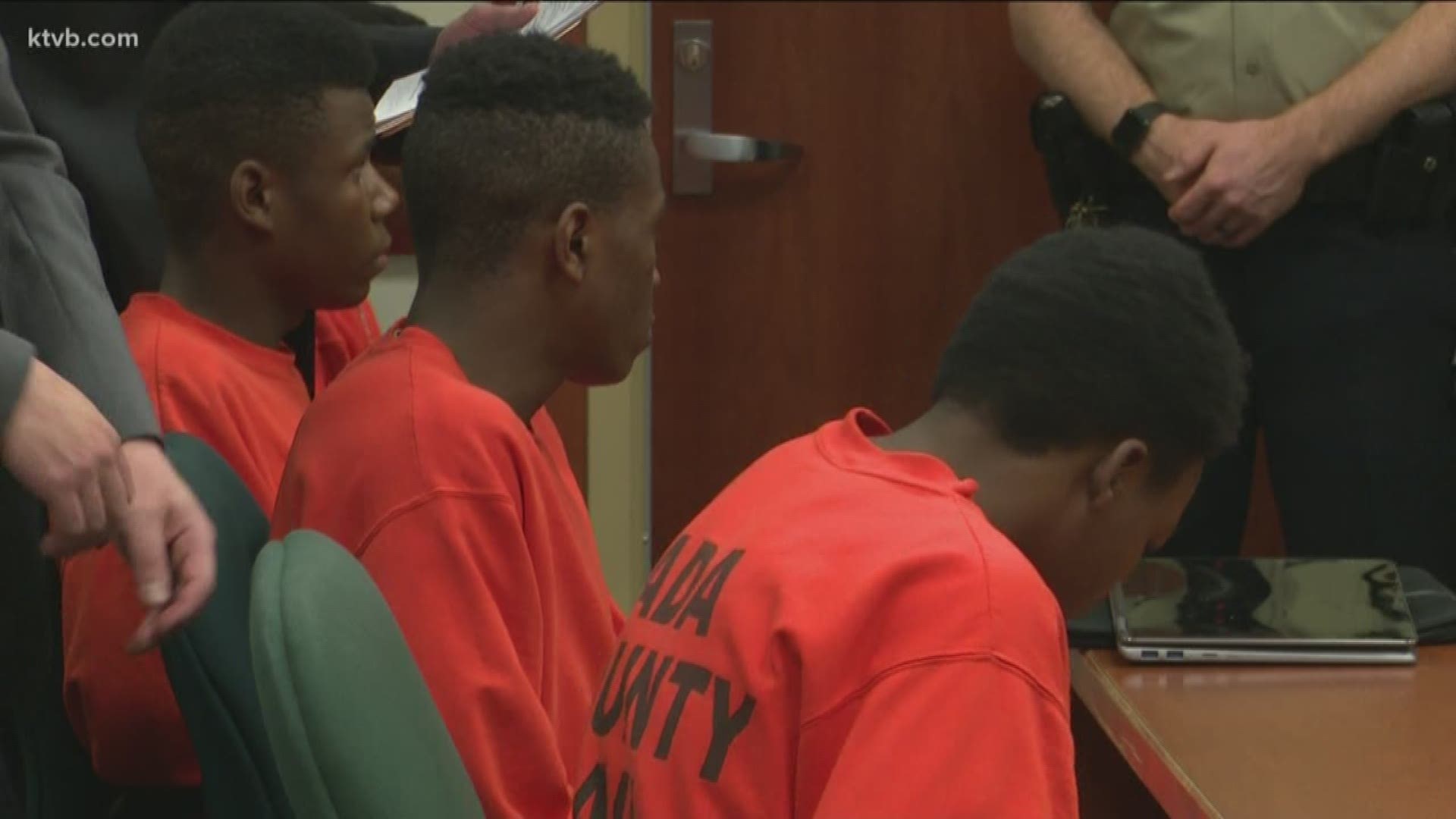 BOISE, Idaho — New details surrounding a Kuna gang rape case emerged during a Tuesday hearing, as a prosecutor warned the four defendants could pose a "potential danger to other women" if allowed out of jail before their trial.

All four have been indicted on rape charges by a grand jury.

Prosecutor Tanner Stellmon told the judge that the 18-year-old victim and Iyombelo had communicated online before agreeing to meet up in a Kuna neighborhood.

The woman told police that Iyombelo and Ulimwengu Lupango got into her car when she arrived and that she and Iyombelo began having consensual sex.

At some point during the encounter, Stellmon said, the victim expressed discomfort that the 16-year-old was also in the vehicle.

"[Iyombelo] paused, made a phone call in Swahili - or some other language the victim did not understand - and return to engage the victim physically," the prosecutor recounted.

While Iyombelo continued having sex with the woman, Stellmon said, "a coat or blanket or some article of clothing was placed over her head."

Iyombelo, Ulimwengu Lupango, and the two other men who had arrived at some point then took turns having sex with the victim, Stellmon said.

"She did not consent to this type of contact, in fact, asked for them to stop," he said.

The prosecutor said new evidence had come to light about the conversation between the four victims the night of the assault.

"As the four of them communicated on this day during this event, it was determined by the four of them that [Iyombelo] would not get a ride back to Boise unless he - as the person who had initial contact with the victim - permitted the other three to have sex with her," Stellmon said.

Stellmon also noted that during police interviews, several of the suspects had expressed remorse or admitted that the woman had told them to stop.

All four of the suspects have denied the charges. A defense attorney at an earlier hearing told the judge the defendants say they had agreed to pay the 18-year-old to have sex with all four of them, although that allegation was not repeated during Tuesday's hearing.

But separate lawyers for the four defendants called the case "complicated" and "convoluted," arguing that the prosecution was not presenting the full picture.

"There's a lot of conflicting information on what happened in the car that night," Marco DeAngelo, Iyombelo's defense attorney said.

The defense lawyers each urged Judge Michael Reardon to lower the suspects' $250,000 bonds, all pointing to their clients' family support and very minimal or lack of criminal history.

"Finding time at the jail, finding time to get an interpreter in a room and get everybody in place - trial preparation if this young man stays in custody is going to be doubly or triply hard," he said.

Chastain asked the judge to consider releasing Lupango and placing him on home monitoring instead.

The attorney for Uli Lupango, Elias Lupango's younger brother, agreed, saying the jail was not the right place for his client.

"Uli is a juvenile - he is 16 years of age, and he is currently housed at the Ada County Jail which as the court knows, is an adult facility, he said. "We have real concerns about his safety and protection."

The Ada County Sheriff's Office says Lupango is being separated from the adult inmates in the jail and nevers comes into contact with adult inmates.

All four of the defense lawyers argued their clients are not flight risks, due in part to their status as refugees. Each of the suspects came to Boise from Tanzania, although it is unclear whether they were born in that country - a mostly politically stable zone that is home to enormous permanent refugee camps - or fled to Tanzania from a neighboring country.

Thomas Monaghan, Rashidi's lawyer, said his client had neither the money nor desire to go back to Tanzania to escape his criminal case.

"His family may have gone through a lot to be here, and he is grateful. The last thing he wants to do is leave," Monaghan said. "Frankly, he has no ability to go anywhere else in this country or overseas. He has limited English, he would be unable to navigate outside of this community without drawing immediate attention to himself."

But Judge Reardon took a different view, inquiring about the defendants' positions as green-card holders.

"I ask that not because I think their refugee status has any bearing on my decision on bond, but their immigration status does," he told the lawyers.

A rape conviction would place the suspect's legal status in the U.S. at "great risk," and could even lead to them being removed from the country, he noted. The prospect of deportation, coupled with the possible life sentence the defendants could face if found guilty, could create a powerful incentive to skip town before the trial, Reardon said.

The judge ultimately declined to lower the bonds, all but guaranteeing the suspects remain behind bars as the case pends.

Several of the defendants openly wept as the judge spoke.