Three men and a teenage boy are in custody after police say they sexually assaulted an 18-year-old woman earlier this month. 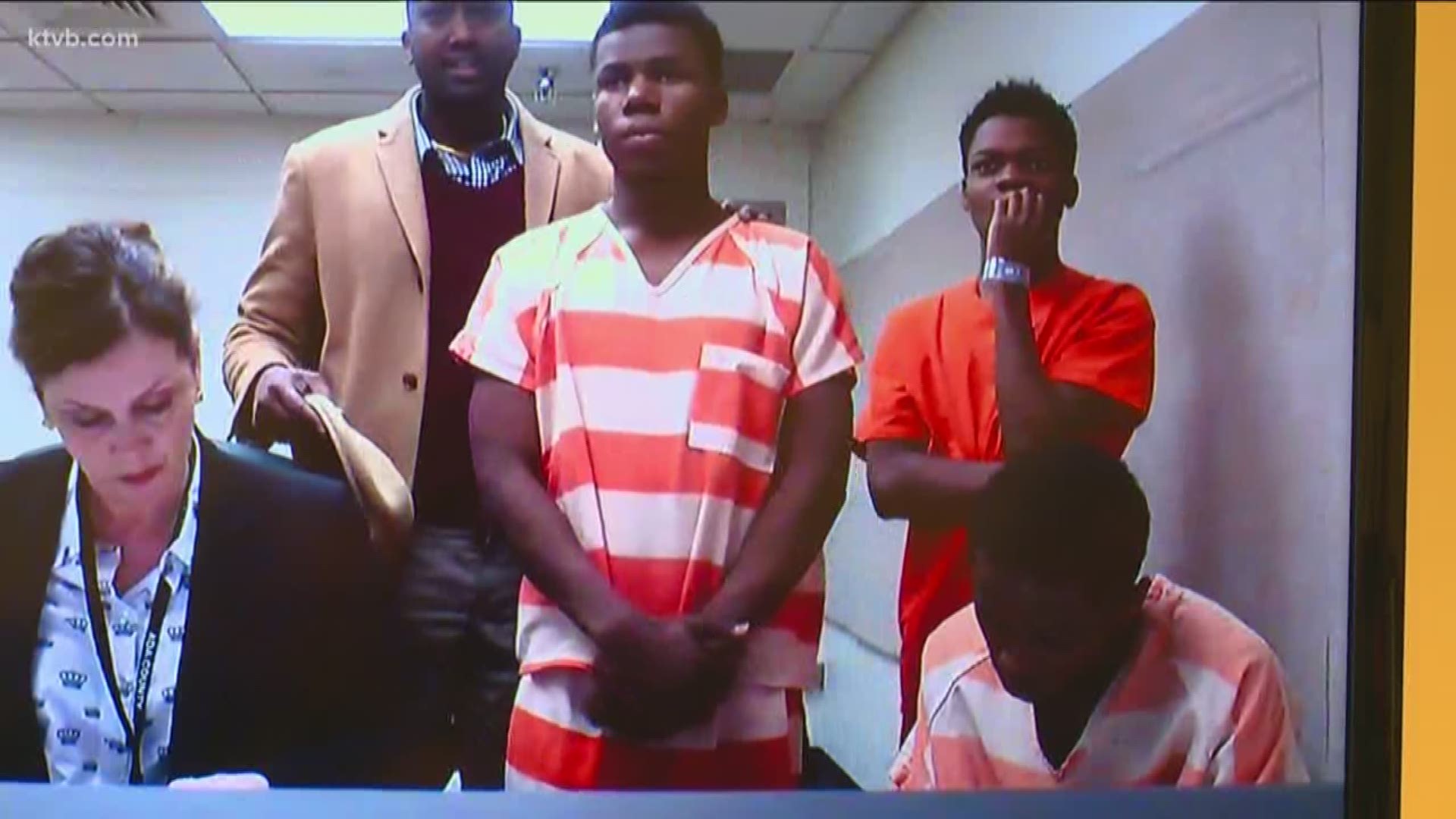 KUNA, Idaho — Three of the defendants charged with gang-raping a woman in Kuna told a judge during their initial arraignment Friday afternoon that the accusations against them were false.

Elias Lupango, 19, Rashidi Mulanga, 18 and Swedi Iyombelo, 18, all of Boise, were arrested Thursday on the felony rape charge. A fourth suspect, a 16-year-old boy, was arrested Friday morning on the same charge.

Because the fourth suspect is a juvenile, his name has not been released, and he did not appear in court with the other defendants.

According to the prosecutor, the 18-year-old woman and Iyombelo made contact over social media and agreed to meet up in a Kuna neighborhood Feb. 7. The two agreed to hang out, but sex was not discussed, he said.

"The victim believed she was meeting only one individual, your Honor," the prosecutor said. "The victim arrived at the location and observed four males, not just one. She stated to law enforcement that she was initially apprehensive upon arriving, but stayed."

Iyombelo and the 16-year-old got into the victim's car, and the woman and Iyombelo began having consensual sex, the prosecutor said.

But after the sex began, the woman told Iyombelo to stop, she told police. According to the prosecutor, Iyombelo later admitted to detectives that the woman said no three times, but he kept having sex with her.

The other three defendants then took turns raping the victim, the prosecutor said.

"The victim has reported that she stated no a number of times, and told law enforcement she was afraid they would hurt her and she was worried if she did anything they would kill her," he said.

Police reviewed messages between the defendants and the victim in which she tells them they "used her" and that "she never said it was OK."

The suspects sent back messages, including a video message, in which they apologize for what had happened.

After being taken into custody, Lupango and Mulanga admitted to detectives "that they were never given permission to have sex with the victim in this case, and that she just laid there," the prosecutor said.

"Both stated that she probably didn't want them to have sex with her," he continued.

The prosecutor asked Lupango, Mulanga and Iyombelo to each be held on a $250,000 bond, arguing that the men have limited ties to the Boise area. All three suspects are refugees from Tanzania, according to their public defender; Mulanga has been in Boise for six months, while Lupango and Iyombelo have been in the area for three years.

During their hearing, the suspects denied raping the woman, saying through a translator that they did not commit the crime they are accused of.

When Judge Russell Comstock asked the defendants if they understood the charges, one of the men insisted they were innocent.

"Yes judge, I understand, but that's not what we did," Lupango responded through a translator.

Later, after the judge asked the men if they understood their rights, Iyombelo chimed in as well.

The defendant's public defender asked the judge to set a much lower bond, around $2,000. She told the judge that the men had struck a deal with the 18-year-old before the encounter.

"Apparently she had been aware that there were four of them and that they were going to pay her for sex," the attorney said. "There's a little more to this story than we all know at this point."

Comstock ultimately sided with the prosecutor, ordering each man held on a $250,000 bond.

Lupango, Mulanga and Iyombelo are due back in court Feb. 27 for a preliminary hearing. If convicted of rape, they could face up to life in prison.