For the eighth year in a row, an anonymous man paid off layaway bills for families in need. 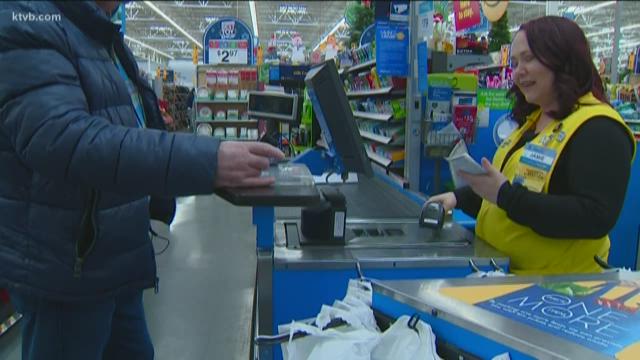 But every year, one mysterious man silently pitches in to create some Christmas magic in the Treasure Valley.

For the last eight years, an anonymous man walks into local Walmart stores, heads to the customer service station, and asks to pay off the layaway bills for families buying holiday gifts for their kids.

This ‘secret Santa’ likes to stay out of the spotlight, but Tuesday he let KTVB tag along, just as long as we didn't reveal his secret identity.

Secret Santa saves up all year to pay off thousands of dollars in layaway bills.

This year, Santa picked Tuesday to sneak into some local Walmart stores because all unpaid layaway bills after that day are put back on the shelf.

Credit: Tyson White/KTVB
For the 8th year in a row, an anonymous man paid off layaway bills for families in need in the Treasure Valley.

Santa tells KTVB, that is the last thing he wants to happen.

Every year through the grapevine, this Santa gets to hear about the difference he made, and the smiles he helped create on Christmas morning.

He says nothing beats hearing those stories but he also hopes his story will get others to give back this holiday season.

"The idea is to hopefully motivate other people who will see this interview to go out and do something for somebody else," he said. "They will get the feeling that I do Christmas morning."

He says that feeling is like winning the lottery, it will never get old.

Through eight years, he has now paid off bills for more than 200 families.

Secret Santa says there is no better feeling on Christmas morning than knowing that he was able to help families in need.

He tells KTVB he will be celebrating his annual tradition with a Dr. Pepper and a steak.