'We're in this together': Best friends of more than 50 years reunite for CDA Marathon

The trio have been best friends since high school and now live in different states. The pandemic froze their travels, but they reunited for the CDA Marathon. 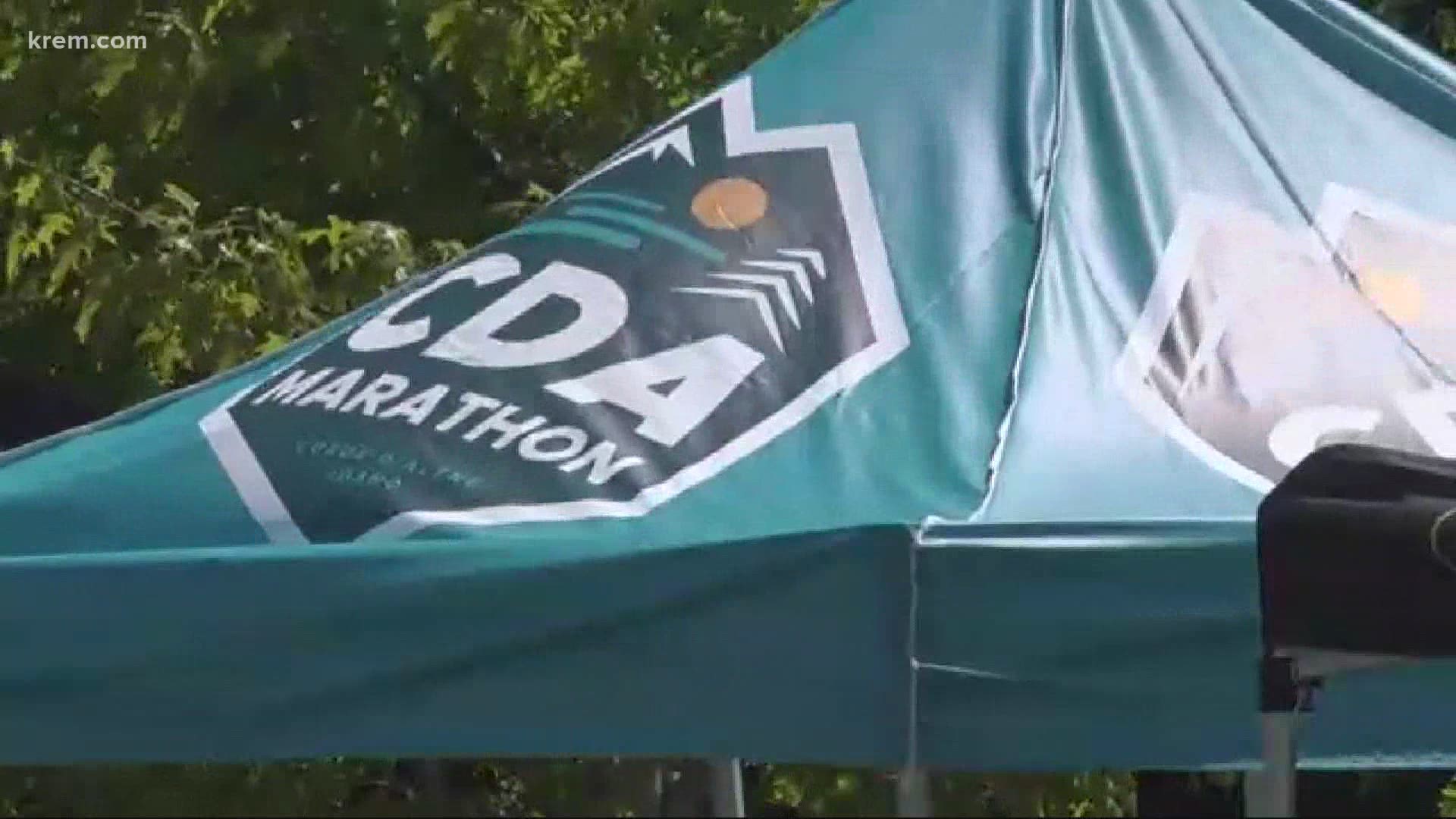 COEUR D'ALENE, Idaho — Nearly 2,700 athletes will be taking on McEuen Park in Coeur d'Alene Sunday. The CDA Marathon is giving a chance for community members to get some exercise, while getting some normalcy back.

Of the thousands attending in-person and about 150 attending virtually, three best friends went to pick up their race day packet on Saturday.

These ladies are known as 'BFFs50+,' or at least that’s how their known to race organizers. They are excited that Idaho is in Stage 4, so the CDA Marathon is almost back to normal. The group all live in different states, and like them, people from all over the country are coming to participate in one of the first major events in a year.

"We used to meet up for lunch and moves, but that kind of came to a screeching halt," Nancy Mckenzie said.

Nancy McKenzie, Nancy Regan and Martha Noe are finally reunited. The trio has been best friends for 50 years, while McKenzie and Noe have been friends for 55. That is how they came up with the name 'BFFs50+.' They tried to stay connected during the pandemic, but when you’re so used to traveling to see each other for the past half-century, they said it gets hard. McKenzie lives in Idaho, Regan lives in Washington and Noe just moved to Oregon from Connecticut. The pals said that they have always lived in different areas since they graduated from high school, but their friendship is tough.

"It doesn't matter how long it's been, it's like we just had lunch last week together," Regan said. "It picks right back up and you feel so comfortable, and you can share so much for so many years."

Then Regan had an idea. She proposed doing virtual walks, since it was an activity they could do together, but in separate states.

"We have a lot of people coming in from all over the country experiencing Coeur d'Alene and just a beautiful weekend here on Memorial Day weekend," CDA Marathon Director Ryan Hite said. "It's really kind of a nostalgia thing to be back here doing a full blown event."

The friends participated in the virtual run in 2020, but it's not the same as being at the park.

"We’re gonna actually get to run the course," McKenzie said.

"We don’t run, we walk briskly," Noe said with a laugh.

They are walking the 5K together; they are three of the nearly 2,700 racers. This was a shock for Hite.

"Everyone talked about a pent-up demand for people to get back to racing, and I think we've seen that," he said. "We are probably one of the larger marathons, in terms of participation numbers, that the CDA marathon is seen in several years."

The Marathon, Half-Marathon, 10K, 5K and Kids Challenge will travel around the Lake CDA.  They are planning to do start waves of less than 50 people every few minutes, he said. Runners are allowed to begin running at any moment within their allotted ten-minute slot. There will not be an official gun that goes off for the start, runners are allowed to start anytime during their start wave in which the start line is empty of people and you can maintain physical distancing, Hite said. The trio is thrilled to have all gotten the same start time. The organizers are spacing-out runners from 5:30 a.m. to 11 a.m. for a one day event.

"If we jog, we will jog together; If we walk, we will walk together," McKenzie said. "We're in this together."

Even though you may not have seen your best friends in more than a year, a simple idea to walk virtually could lead you to your next friendship tradition.

All finishers will receive a finisher medal, bottle of water, snacks, and food options. Finishers may take a photo at the photo backdrop after their finish. Race merchandise will also be available near the finish, he said. Food vendors and sponsor booths will be waiting for you at the finish line.

It is an absolutely GORGEOUS day in Coeur d’Alene’s McEuen Park.

The sun is shining, people are having picnics and the @NegSplit is putting on the finishing touches for the CDA Marathon tomorrow! pic.twitter.com/OSRRKrp1rT