Flood Advisory issued for the Palouse in Washington, Idaho as rain falls and snow melts

Pullman and Moscow are under a Flood Advisory until 8:45 am Tuesday. 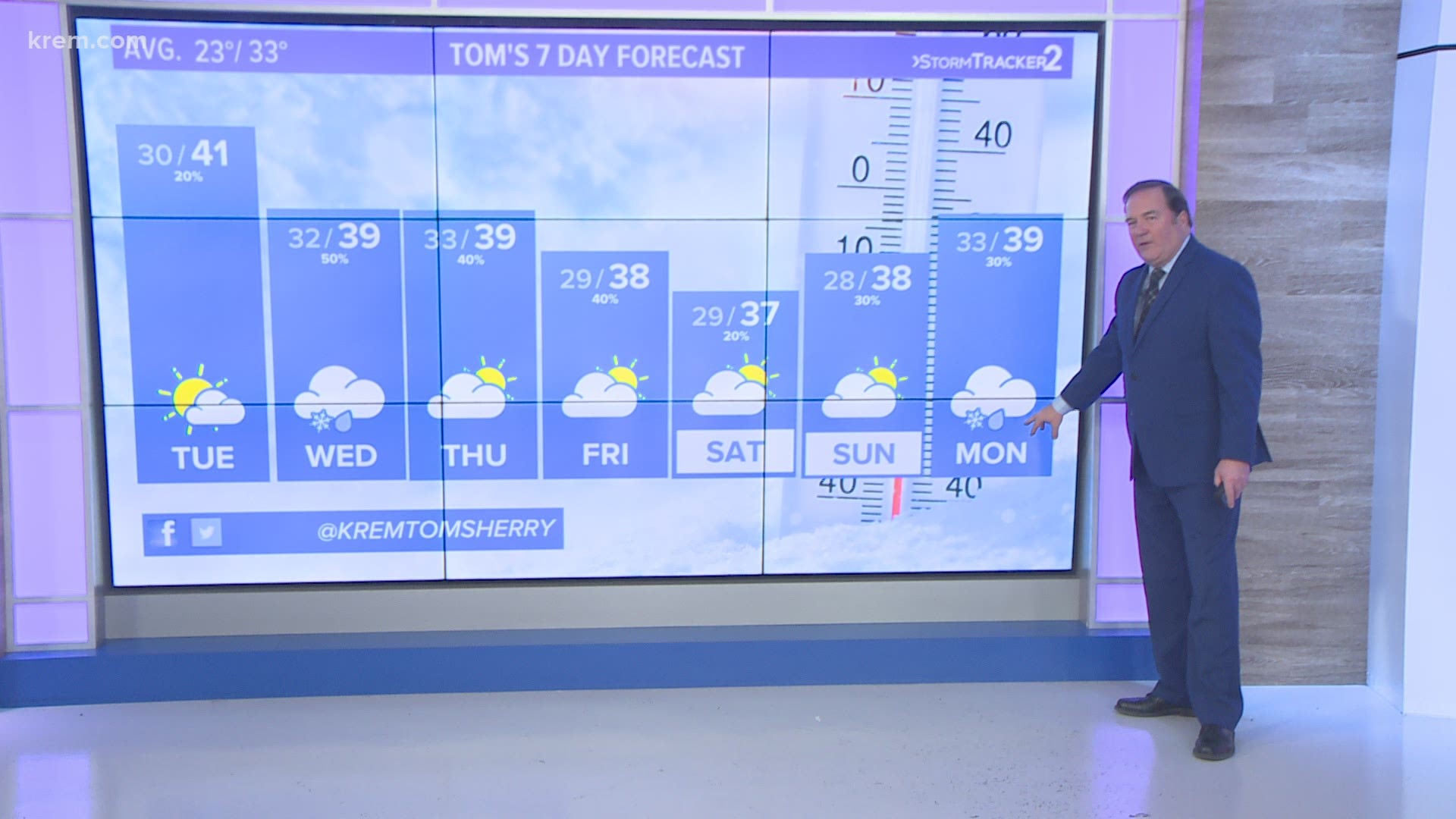 SPOKANE, Wash. — Another round of rain for us low landers. Following this past weekend’s snow-melting deluge, another potent system is sliding through the Northwest bringing even more rain to lower elevations to start the workweek.

A Flood Advisory has been issued for the Palouse until 8:45am Tuesday. Streams and rivers are expected to rise sharply due to Monday's rain and mountain snowmelt. Those living near any riverbanks should be cautious that water levels will be higher than normal.

Ponding on roads and fields is likely too due to the rainfall and melted snow.

Spokane will likely pick up another almost half inch of rain on Monday. That is close to what the city picked up all last weekend. To put that into perspective, that would be another round of snow rivaling the 8.1 inches that fell last Wednesday.

If you’re missing the snow, you need not worry. Just grab your traction tires or chains and a sense of adventure and head up to any mountain. With the warm temperatures, you’ll have to climb pretty high. Around 4,000 feet should be the transition this afternoon in the Inland Northwest. You will find snow there and plenty of it.

Warnings and advisories remain in place today for anywhere between 6 inches and more than a foot of fresh snow. Winter storm warnings for the East slopes of the northern Cascades and Okanogan Highlands warn of 3-6 inches of snow in valleys and 7-13 inches in the mountains by the time the warning expires at 7 pm tonight.

The first Monday of 2021 & it's going be a snowy one! Forecast calling for snow this afternoon into this evening with up to 10 inches of new snowfall. Pls slow down, increase following distance & have traction tires. Chains required now both directions except AWD/4WD. pic.twitter.com/s3aqD4CRJU

Early in the day there was enough snow to prompt chain restrictions on Snoqualmie Pass. The tricky travel is expected to last through the day today before eventually coming to an end early Tuesday.

Heads up! An avalanche warning has been issued for the Cascades East Central Zone where triggering a slide is likely and will be big enough to bury or kill you. Avoid travel in or below avalanche terrain. Go to https://t.co/vqt3TEeFJl for more information. pic.twitter.com/fbhc3FMI8M

Backcountry travelers should be aware of avalanche conditions. The Cascades east central zone remains under an avalanche warning for the unstable snowpack from this most recent round of moisture. The heavy, wet snow on top of the lighter base makes travel in avalanche terrain exceptionally dangerous.

This winter has been a snowy one, believe it or not. Spokane has already seen almost a foot more snow than it typically would in a this far into a winter. It’s just all melting right after it falls. In the mountains, that is not the case. Most areas are near or above normal when it comes to snowpack this winter.

For all of you skiers and riders, be safe in this inverted snowpack and keep your tips up!